No Guns At UH, Even If It’s Art. Until August.

Last week, the University of Houston’s Art Department opened their annual show of works by first and second-year graduate students as well as UH undergrads. Prior to the exhibition’s opening, MFA student Alton DuLaney met with resistance from UH’s Police and Legal departments about a work he wanted to include in the show. The piece, ART Gun, is made from a pistol and was intended to comment on the recent campus carry law passed in Texas—as a public university, UH will be required to allow concealed weapons on campus starting August 1st of this year. (See more gun art in Christina Rees’ All of Our Guns, Part 1 and Part 2). 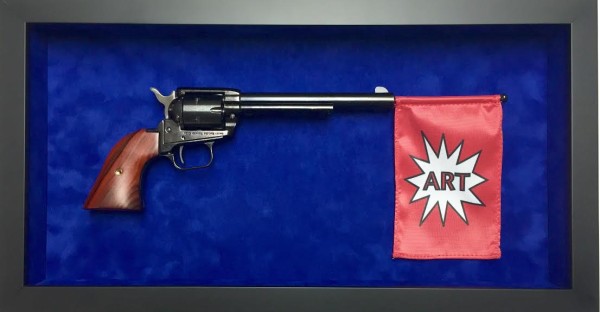 The UH Police sent the artist this statement: “I have consulted with Legal and the gun is not to be allowed on campus. From both our positions, the matter is closed”

The artist on their reason for creating ART Gun:

“I wanted to create a piece of ART that took a neutral stance on the subject while at the same time commenting of [sic] the omnipresence of guns in the American culture and society, and opening up the dialog to this conversation.”

DuLaney says the work is inspired by Chris Burden, Marina Abramovic, Andy Warhol, Marcel Duchamp, Roy Lichtenstein, and Mel Chin (who recently had a show at the Blaffer Art Museum on campus). Ultimately, the artist chose to exhibit the work without the gun, asking, “Did the authorities give even more power to the object by forbidding its exhibition and thereby validate the power of the ART by censoring it?”