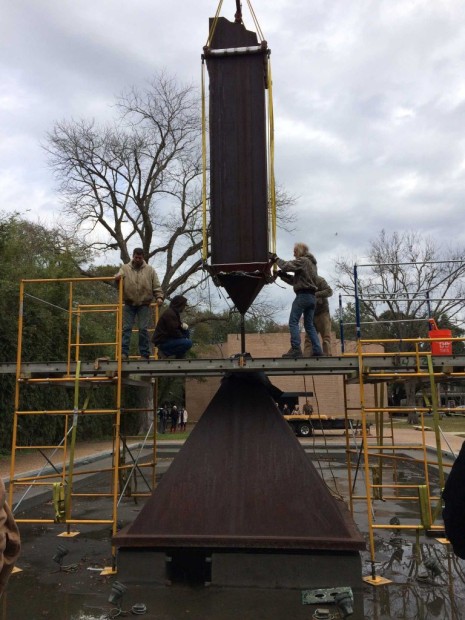 Barnett Newman’s masterful Broken Obelisk sculpture, which sits in a reflecting pool outside the Rothko Chapel, has been temporarily removed for conservation, according to the Houston Chronicle. The sculpture has been shipped back to its original fabricator in North Haven, Connecticut for restoration over the next 10 months. According to the chapel, the water and humidity have caused corrosion and a build-up of moisture inside the piece. Broken Obelisk has undergone conservation twice before—first in 1987 and second in 2005.

The sculpture was designed by Barnett Newman between 1963 and 1967 and has a lively, controversial back-story. In 1967, Houston was one of four cities in the US given a government grant for public art. John and Dominique de Menil offered to match the grant in order to bring Newman’s sculpture to Houston. The de Menil’s gift, however, came with two conditions—that the sculpture be placed near City Hall and dedicated to Martin Luther King, Jr. The City of Houston accepted the choice of Broken Obelisk and the City Hall location, but rejected the dedication to MLK. After this, the de Menils withdrew their offer and purchased the sculpture themselves. Both the sculpture and the chapel were dedicated in 1971.

Broken Obelisk is set to be reinstalled by 2017. The chapel’s annual birthday celebration of MLK that year will include a rededication ceremony for the sculpture.