Zombies may be the most powerful collective myth modern culture has produced. The living dead have a rich history that stretches back past Count Dracula and Lazarus to Greek tragedy in which heroes fought against their weak human nature in Hades’ dark underground. This ancient myth of the undead has evolved to find its most current manifestation in the contemporary world of zombie film and television.

If you’re a reporter and want to investigate the health of a society, you look at the condition of the underclass. If you’re a cultural observer, you look to the broadest, most visible art and entertainment. Taking the real temperature of a society means looking at its broadest manifestations. This is where you will find its mythology. Ours is full of the decaying flesh of the wretched zombie. It has even invaded art theory in the form of the dreaded zombie formalism. There is no stopping the zombie horde.

Zombie mythology these days almost always hovers around three major global issues: nuclear war, pandemic disease and environmental disaster. The zombie world in Frank Darabont’s The Walking Dead has an environmental slant that telegraphs its theme in the first episode’s first piece of dialogue between Rick Grimes and Shane Walsh. Walsh complains that his girlfriend doesn’t understand global warming and can’t remember to turn off the lights when she leaves a room. Their world goes downhill from there.

Former Greenpeace executive director Paul Gilding lays out a vision of the world’s environmental future in his book The Great Disruption. Gilding points out that throughout history governments and businesses wait until the effects of various crises are totally unavoidable until they react with draconian but ultimately successful realpolitik to save our species. He cites as one example the massive government restructuring of private U.S. industry in World War II which took military spending from around 10% GDP to 37% GDP overnight as evidence that infrastructure can actually turn on a dime.

The jolly Australian claims “it won’t be pretty” but based on various statistics such as the astronomical growth rate in solar energy, he believes the species will survive after more environmental and economic catastrophe, the fall of certain nation-states and probably some level of genocide. The Walking Dead, 28 Days Later, World War Z, and most contemporary zombie mythology all explore Gilding’s deliberately vague “not-so-pretty” scenario. The truth is that we are at the beginning of the zombie apocalypse right now. If we take a modestly realistic look across the planetary landscape we cannot deny that the world is more full of catastrophe and conflict than ever before.

Countries throughout South America, Africa, the Middle East and the former Soviet block are in constant violent conflict over land and resources. The explosive industrial growth of China, India and many other nations dominated by poverty illustrate the fact that the next hundred years will be about the infinite growth demanded by capitalism slamming into the inarguably finite resources of the planet. The United States’ cultural obsession with wealth and expansion at all costs represents a denial and an exacerbation of this reality. 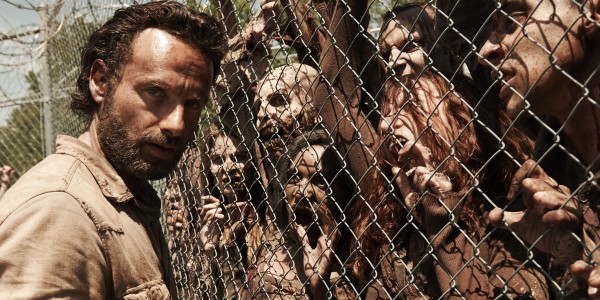 Like the zombies, these revolutionary changes are coming. The question for art and culture is how we are going to paint the picture on the ground. In World War Z a simple but profound moment occurs when Brad Pitt’s character Gerry realizes that the zombies avoid the sick. This provides the key to ending what in that movie is a health pandemic cloaked in gooey zombie flesh. The complete destruction of humanity is narrowly avoided by clever, scientific intuition but not before massive destruction and death.

The first two seasons of The Walking Dead paint what I think is a more realistic picture of the long, painful slog that will be required for cultural and artistic survival in the next century. The binding force between families, friends, and communities written into those first episodes is compassion, intelligence and above all, an angry, clear-eyed realization that reality is too often a shabby shadow of actual possibility. The best art from every century has embodied those values in one way or another.

Zombie painting designed to satisfy a dying market, and a quest for identity and equality that calcifies into cultural tribalism, will have no place in the hard future. In The Birth of Tragedy, Friedrich Nietzsche writes that “…without myth every culture forfeits its healthy, natural creative force: only a horizon defined by myths completes the unity of a whole cultural movement.”

Myths require heroes large and small and as the great Romantic poet Charles Baudelaire writes, “The much-abused garb of the hero is the necessary garb of our suffering age.”

I would like a zombie formalist to chime in on this issue. It seems that all of the zombies don’t think they are doing zombie things, at least that’s my impression from talking to a few of them. Do they know? And if so, how can they be okay with it? I guess cuz it makes muney… Idiocracy is becoming more and more real, there are just more zombies than it predicted.

Mr. Bise’s argument is well worded while at the same time condemning an entire art-form, painting, to tribalism and parochialism. Another way of looking at the zombie phenomenon could be the singular lack of grace, bumbling way in which zombies move and act in movies, regardless of their great appetite. I suggest that what may be going on is a general self consciousness about our time’s awkwardness when it comes to graceful, powerful gestures in instances SUCH as painting. Furthermore, considering the imminent ‘singularity’ predicted regularly in culture now, maybe the ease and effectiveness of machines will make us look zombie-like to their new-found consciousness. We possibly are the zombies to them, in effect.

Michael, what’s to survive in the hard future? Cultural output is being smothered by the marketplace? Any artist worth their salt is motivated by work and not reception. This ongoing ZF conversation is putting me to sleep. I see no moral or ethical dilemma here as I have experienced the joy and confusion of nonobjective abstraction. The ZF paintings I have seen -in person- are compelling and I’m more interested in the work played out over time. How invested are these artists in their practice and the work? Opinions and trends cycle. You know that we signed up for a marathon. I only see value in the artist who wakes up every day and approaches their work with focus and rigor. If the ZF work has no value stop building silos around it.

That’s nice, Robert. Pleased to learn you were rubbed. Pass the lotion when you’re done. And try not to use up the bottle, I have work to do in the studio.