The Republican pushback against the right to reproductive health care in Texas and Wendy Davis’ loss of the governor’s seat last November inspired artist Mary Walling Blackburn to tackle the problem from a different angle. If women are to be denied access to abortion and birth control services, then Blackburn would concentrate her efforts on finding homeopathic remedies that cause sterility in men. This is the starting point for Blackburn’s exhibition at San Antonio’s Sala Diaz, which gathers works centered around the topic of fertility, sterility, exchange, and controversial sexualities.

The exhibition starts before one enters Sala Diaz’s front doors: The title of the show Blackburn’s takes its name for the ♂ Anti-Fertility Garden: Blueprint planted on Sala Diaz’s lawn, composed of a newly-planted myrtle tree (the oleanolic acid found in the tree’s flowers decreases the mobility and maturity of sperm), a hot tub (high temperatures nukes up-stream swimmers in-testero) and a soap painting by Sophy Naess spiked with essential oils from the myrtle, as well as papaya (causes sperm to deteriorate) and neem (also decreases a sperm’s mobility). On opening night, the hot tub was available for show attendees to take a dip in this cauldron of sterility. Drawings of disembodied testicles traced on the hot tub hint at the rest of the exhibition. 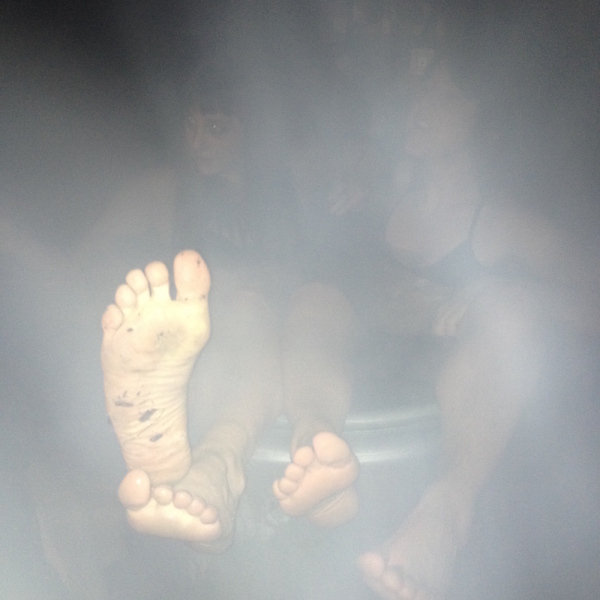 Inside the gallery, Blackburn presents a selection of recent projects commissioned for other exhibitions in a mini-retrospective. Should one seek to avoid the problem of insemination entirely, the working drawings for Speculative Reconstructions of Edna St. Vincent Millay’s Lost Ivory Dildo, 2011-present, offer those inclined towards penetrative reception an alternative. Literary legend has it that the poet’s prized possession was twelve inches long and eight inches round hunk of ivory circumscribed with a rope pattern. Blackburn’s versions in pen, watercolor and photocopy scans are imaginary experiments in shapes, sizes and scenario. Thinking of the enlarged clitoris of the female hyena, mistaken from afar as penis because of its size, Blackburn imagines a female-sexed penetrative object. 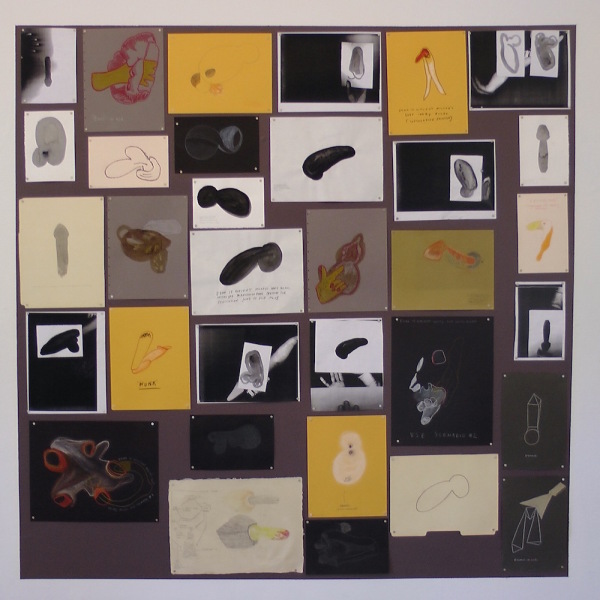 In David Meet Paul, photographer David Hamilton and painter Paul Gaugin have been match-made across time because of their tendencies to use their art practices as opportunities to spend time with naked young girls. Blackburn uses Hamilton’s ballet series, illegal to transport via post, as the ground for a series of drawings, that obscures, contorts, caricatures, and transmogrifies the original. A corresponding video, manchildren [she-corpses], 2013, in the side room shows Blackburn, destroying a Hamilton book with a violence equivalent to the photographs, replacing and overlaying images of girls with what she calls the “anti-boner:” pictures of “nude dudes.” 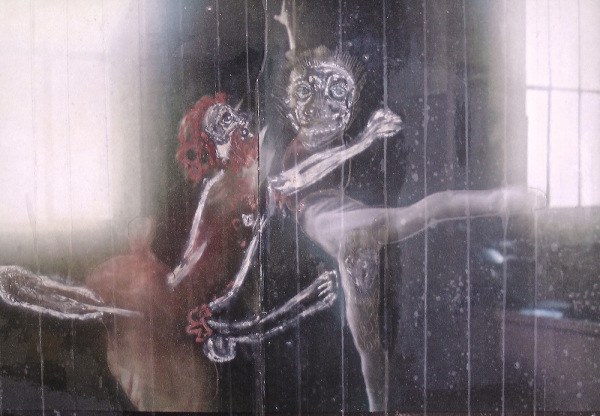 Hecate’s Necklace [Numismatics], 2014, a video compiling quick and dirty drawings of testicles takes its name from the Goddess who wears a necklace of severed testicles in ancient Greek mythology. For [Numismatics, for real], 2014, Blackburn has inscribed testicle drawings onto pennies in clay and enamels. Some of these pennies were recirculated into the monetary stream. Further extending the idea of exchange beyond fluids into the realm of commerce and alternative economies, Blackburn includes Anti-Barter Flier #1 and Flier #2, bleached Tommy Hilfiger shirts crumbled into labia-like folds are juxtaposed with Hilfiger’s famous racists statements about the appropriate audience for his clothing.

Tucked in Sala Diaz’s corners, in the wall space above the toilet in the bathroom, behind the faucet in the sink, Blackburn implants other works along similar themes: A humble pornography of micro-penises, Andrew Wyeth’s The Clearing, platinum scans of a vagina, and a small coffin frosted in chocolate. Curated by Laurence Miller, director of Fluent~Collabortive, where Blackburn had an exhibition in 2010, ♂ Anti-Fertility Garden abounds with the associative wit and historical nuance Blackburn is great at.

Again, an elegant work turning the logic of the system around! The homeopathic solution (no pun intended) seems gentler than a surgical vasectomy. Mary turns the political gender logic around while making the procedure for male sterility kinder.

Surely the remedies were not homeopathic? Nonetheless, I would love to have a hot tub filled with anti-spermy essential oils available for my partner every time we’re about to get busy! Fun write up! Wish I coulda seen the garden Mary! Reading all about antifertility herbs right now in John Riddle’s “Eve’s Herbs” but of course they are almost all for women.