Where We Have Come, Where We Are Going

Two exhibitions by accomplished Texas contemporary artists are currently on view at the Art Museum of Southeast Texas. In the front gallery, Dornith Doherty: Oasis is an exhibition of approximately 25 large, framed archival pigment prints and lenticular photographs (think holograms from the 1980s) from the artist’s series Archiving Eden, in which Doherty manipulates digital X-rays of the seeds, pods, and plant leaves stored at seed banks to create mesmerizing collaged patterns.

Doherty first began visiting seed banks in 2008. I never knew what a seed bank was until I learned about Doherty and her work a couple of years ago, but there are more than 1,400 of them around the world. According to Doherty’s website, “in this era of climate change and declining biodiversity, by collecting, researching seed biology, and storing seeds in secure vaults, seed banks play a vital role in ensuring the survival of genetic diversity in wild and agricultural species.” Seed banks are becoming more and more important due to humanity’s need, whether voluntarily or involuntarily, to inevitably taint and destroy what it comes into contact with on this planet. 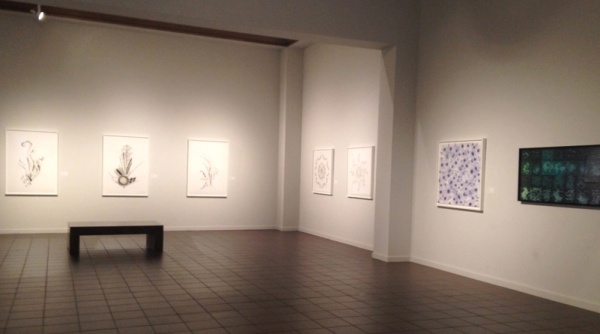 The entrance into Oasis is like entering an actual seed bank—a quiet, cold, calm, rather dim atmosphere—and we feel immediately absorbed into the microcosm spilling its guts around us. Doherty’s presentation is white, pure, sterile, and lends itself well to the scientific nature of the work. There is a precisionist, clinical feel about the exhibition that isn’t entirely surprising. Except for The exhibition is mostly devoid of color except for Banksias, where a delft/indigo blue creates an icy, crystal-like formation that references the process of cryogenic preservation, central to the methodology of saving seeds.

The symmetry gives the exhibition a very balanced, orderly feel amidst all the chaos that nature normally throws at us. The collages that Doherty has created from the x-rays are sublime. Just as zoos and animal sanctuaries claim to preserve the endangered animals of the earth, so do seed banks serve as reservoirs for a time when we have used up and jeopardized our resources. We are reminded that what we are seeing is a result of man’s ultimate destruction of himself and the empire he has built. It’s a fitting transition to Celia Eberle’s exhibition In the Garden of Ozymandias in the adjacent gallery.

Celia Eberle: In the Garden of Ozymandias 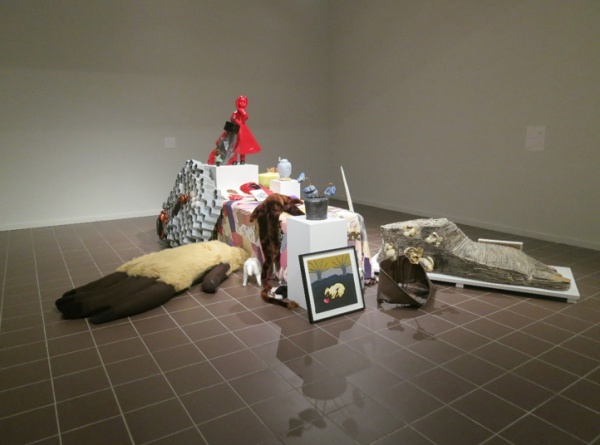 Celia Eberle: In the Garden of Ozymandias, installation view

Aesthetically and stylistically, there couldn’t be a greater divorce between two artists’ work. Eberle and Doherty are like a black and white cookie (the yin and the yang, if you will). Doherty is the white, pure, smooth half and Eberle the messy, dark, black crumbly part.

Maybe it’s Halloween and my mind is focused on cookies and candy at the moment. I don’t want to reduce these two artists to cookies: we are dealing with some big existential issues here. In Doherty’s works we are examining images of seeds, and Eberle’s installation is a cluster, itself like a large flower, that contains seeds germinating the good and evil of society and humanity.

Entering Eberle’s exhibition In the Garden of Ozymandias we are confronted by a large, off-centered, haphazardly arranged grouping works. The centerpiece of the installation, camouflaged amidst the surrounding works, is Wanderer, a bed with a found quilt and objects lying on top. Were it not for the white gallery pedestals, we might think someone left their garage sale items in the middle of the gallery. 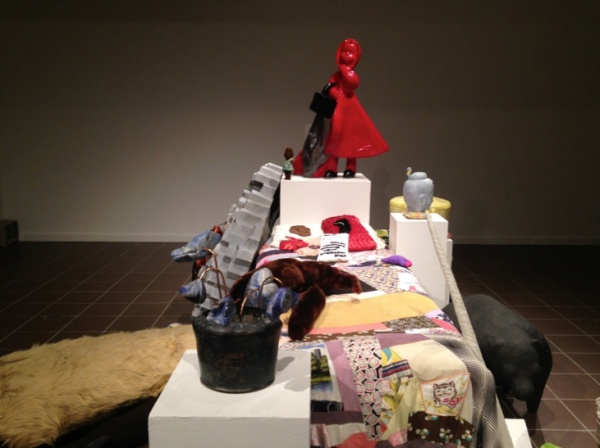 Wanderer (bed in center), 2004, fabric and objects on found quilt.

What is this stuff? This is an extremely wild and untamed garden, disjointed and ugly. I smiled curiously at the giant, furry paw protruding out on the left side and the life-size human foot made of countless layers of newspapers jutting out on the right. 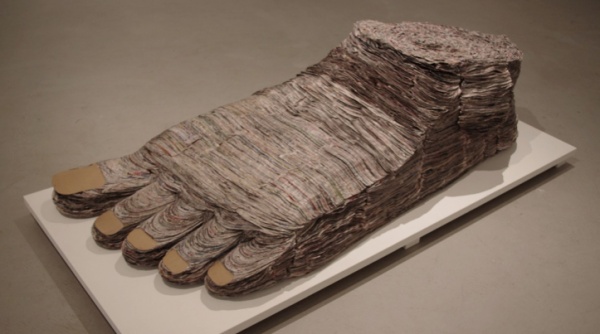 On a shelf nearby, Eberle thoughtfully leaves us two matches with the heads created from rubies, in case we need to burn the place down after we escape the madness.

Balance is paramount in this installation. Fuzzy stuffed animals are completely confounded by an acrylic painting of a cat wearing a skin suit with all the fur plucked out. The cute domesticity of knitted objects, and a landscape with quaint, white glittery houses is juxtaposed, BOOM! with two naked men wrestling on top of a soup tureen. Some skinny creature vomits his heart out in a work titled Eversion. I Googled “eversion” and it’s the act of turning inside out. That makes sense. 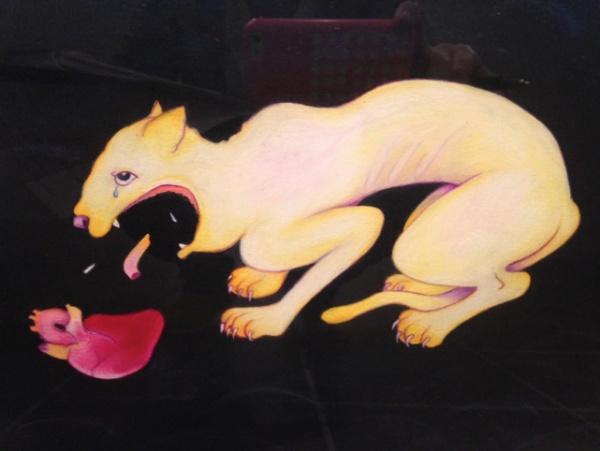 But going through each detail in this installation won’t do it justice. What is Eberle doing and why? If you’ve never read the sonnet Ozymandias by 19th century British poet Percy Bysshe Shelley, maybe you heard Walter White recite it at the opening of one of the last episodes of Breaking Bad. Either way, it’s a masterwork:

I met a traveller from an antique land
Who said: “Two vast and trunkless legs of stone
Stand in the desert. Near them, on the sand,
Half sunk, a shattered visage lies, whose frown,
And wrinkled lip, and sneer of cold command,
Tell that its sculptor well those passions read
Which yet survive, stamped on these lifeless things,
The hand that mocked them and the heart that fed:
And on the pedestal these words appear:
‘My name is Ozymandias, king of kings:
Look on my works, ye Mighty, and despair!’
Nothing beside remains. Round the decay
Of that colossal wreck, boundless and bare
The lone and level sands stretch far away.

Ozymandias was another name for the ancient Egyptian Pharaoh Ramses II. Presumably, Shelley was inspired to write this poem after the British Museum acquired a large chunk of the 13th Century B.C. statue of the ruler in 1817 – the year he began writing the poem. The sonnet is about man’s rise to greatness and his ultimate collapse; the insignificance of man and all he has achieved in the passage of time. Life’s ephemerality and the material possessions that we attain only to be ripped away from us and turned back into dust.

Eberle’s installation is a multifaceted reflection of this moral. Her art looks at humanity, not with rose-colored glasses, but with a stark realism of our past and future. She doesn’t want to let us off the hook and holds us accountable for all of the past inequities brought on ourselves and each other. Nature, for all its beauty, is ugly and bleak. Humans are good, but at the heart of all lies the dark black core. Secret Garden exemplifies this point with the artist’s addition of a black human face in felt to a found floral crewel embroidery. Eberle accentuates this message with the wide assortment of textures and materials: soft and fuzzy animals, blankets, pillows, and embroideries evoke safety and warmth; stone, bone, teeth and metal signify the aged, ancient, rugged, raw parts of our existence – what’s left after we are gone. 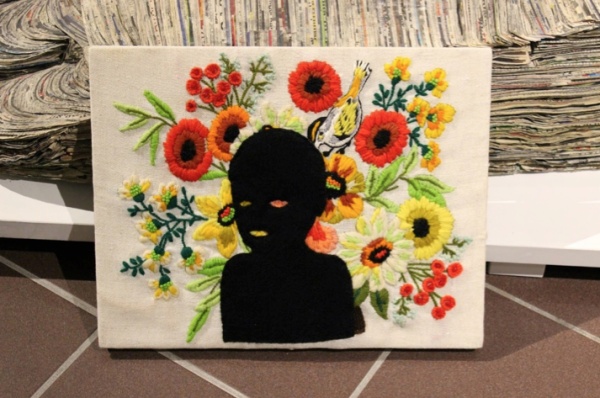 This review is titled Where We Have Come, Where We Are Going because it’s the perfect assessment of the exhibitions. Doherty is completely future-based, going forward; Eberle takes a step back, saying “watch out for what might happen. We are creating our downfall.” It’s extremely thought provoking. It wouldn’t be good art if it weren’t!

Dornith Doherty: Oasis and Celia Eberle: In the Garden of Ozymandias will be on view through Jan 4, 2015 at the art Museum of southeast Texas in Beaumont.