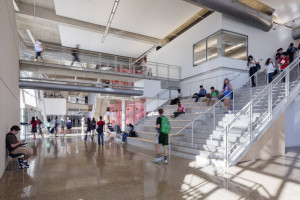 Joan Davidow, longtime collector, art advocate and formerly head of the Dallas Contemporary, has announced along with the University of Texas at Dallas that her art collection will be installed as a permanent display in the public areas of UTD’s new Edith O’Donnell Arts & Technology Building. Davidow, an avid fan of art made in this region, has an eclectic collection of video, photography, and new media art by artists in the early and middle stages of their careers.

On September 19th at 6:30 p.m. in the first floor gallery of the new building, a reception and show called “Tech Talk” curated by UTD’s John Pomara and Davidow will open to celebrate this gift. The reception is open to the public. Via UTD: “UT Dallas President David Daniel and Arts & Humanities Dean Dennis Kratz will welcome a gathering of students, artists, teachers, collectors and arts advocates to honor this highly inventive and meaningful gift to the university.” For more info on this event, go here.

Joan proves again that she is a treasure.