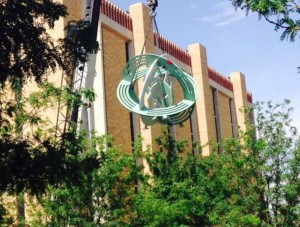 Texas Tech University in Lubbock has unveiled the newest piece of public art on its main campus as part of its Public Art Program for the Texas Tech University System. The new steel and aluminum sculpture, titled “Astrolabe” (pictured) is by New York-based artist Owen Morrel. The sculpture was craned into place in the courtyard of the Experimental Sciences Building on Wednesday and Morrel should complete its installation this week.

The sculpture is an abstracted interpretation of the same-named ancient navigational tool. As reported by KCBD Lubbock, “The $242,000 project will be… surrounded by a mound of drought-tolerant plants and hardscape that ascends in a spiral pattern, providing a pathway to the art piece and creating a metaphorical reference to an image with broad scientific implications.”

Texas Tech’s Public Art Program was launched in 1998 by the Board of Regents and its effects are visible throughout the university system’s various campuses. So far 98 works of art have been completed, including pieces by such popular artists as Tom Otterness and Terry Allen.