The first FL!GHT Gallery opened in 2002 in Silo 15, once used by Big Tex Grain Co., on a then-unloved stretch of the San Antonio river. These converted silos saw a nascent underground scene in the early 00s, before asbestos, real estate development and whatnot closed them down.

Now, going on its bar mitzvah year, FL!GHT occupies prime real estate next to The Blue Star Contemporary Art Museum, and it’s going to be interesting as hell to see whether Parr and Saavedra’s outsider, emerging-artist ethos (often called “scrappy,” often by me) will stick in their new upscale digs. 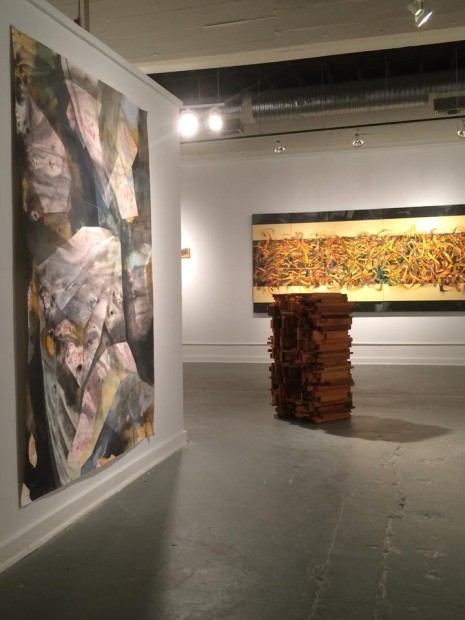 A visit on Thursday to the inaugural show, YES (the river knows), made me hope. Somewhere between sleek white box and impromptu garage, the new space has ample wall and floor space, a small working kitchen, and a dedicated project space, too. Ed Saavedra will use part of it space as a working studio, which brings back hands-on purpose to Blue Star, a compound which seems ever more polished, and ever further from the old silos. The new space has lots of promise.

The show itself is a treat: if you have followed San Antonio’s emerging artists for the last twenty-five years, you too will find marvels. There are 15 artists represented in YES (the river knows):  Jeremiah Teutsch made a pencil self-portrait on the gallery wall in a matter of minutes. Megan Harrison worked on her piece in public, with a chorus of viewers lamenting and glorying in each change. There’s a vintage Alex Rubio, a witty Ethel Shipton, a terrific collage print by Rigoberto Luna of writer Gerry de los Santos.

But first among equals is a spectacular recent work by James Cobb himself.  A Thousand Arms of Compassion is a must-see in person. It’s commanding in scale, muted in tone, and just outrageously graceful. I was agog at his mesmerizingly complex paintings in the late ‘90s, when he was just beginning to experiment with vector design, and his primary public artwork was with the band Pseudo-Buddha. (In the late ‘90s, damn near everybody was experimenting with digital technique and being in a band.) That Cobb was then approximately the age I am now, and took on and mastered a massive skill set to express such a shockingly inimitable personal vocabulary, makes me want to do more with my actual goddamn life. A selection of Cobb’s digital prints are online. 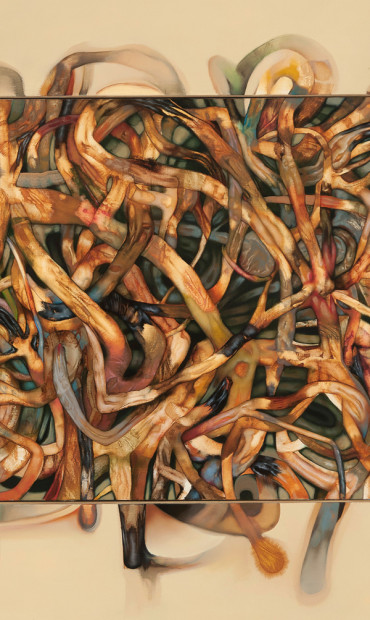 With A Thousand Arms of Compassion, Cobb takes the myriad algorithms that you ingest in digital design, and just paints the hell out of them. He’s rendered a digital-vector rhythm of intertwined repetition with a soft, painterly hand, using actual paint. It’s fast and loose and loopy and musical, and recalls wildstyle, bones, teeming viscera and spirit-infested codices just beyond our power translation. Grand yet unassuming, it’s maybe the best single work I’ve seen come out of San Antonio in a solid year.

I’m tempted to end this capsule review with something like, “if this is any indication of the caliber of FL!GHT’s new location blah blah” but it’d undersell A Thousand Arms of Compassion. I mean, good for the FL!GHT guys in getting to show it.  But they’re also some lucky bastards.

The new Fl!ght Gallery will be open First Thursday & First Friday at Blue Star Art Complex, 134 Blue Star , San Antonio. YES (the river knows) will be on view through June 27, 2014.