The Biggest Mural in Houston, a Temporary Ode to Preservation, is Unveiled Today 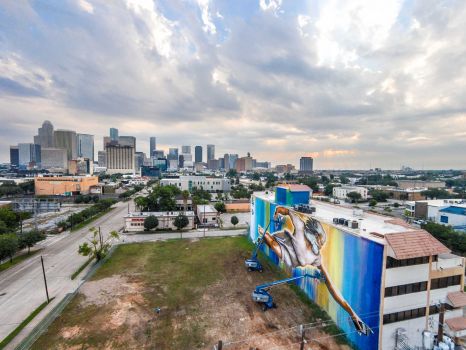 Even Houstonians who have spent the past month watching that giant mural go up in Midtown (off Fannin, behind the five-story building at 2800 San Jacinto) may have skipped the $100 VIP preview on Thursday evening, but the official unveiling of Preservons la Creation takes place today from 3-11 pm. Tickets are $10, though the $100 tickets are still welcome, and the proceeds will benefit an upcoming children’s hospital mural project. Festivities include an art market, music, food, beverages and a gallery show of the mural artist.

Billed as “the biggest mural in Houston” (its website is www.thebiggestmuralinhouston.com), the project is the work of French-American artist Sebastien “Mr. D” Boileau, who established Eyeful Art Murals and Designs in Texas in 1998. The event is presented by Eyeful Art and UP Art Studio, with community partners Texan-French Alliance for the Arts and The Midtown District.

One of the stated objectives for the project is to further “the discussion of conservation and preservation.” As a former graffiti artist, Boileau is familiar with the impermanence of often illegally installed street art. In this case, though, he was invited by urban real estate developer Adam Brackman. The Houston Chronicle explains Brackman’s objectives:

Brackman’s company, Common Ground, invests in Midtown properties with redevelopment potential. He’s enlisted muralists before to bring attention to his buildings and deter crime, also appreciating how street art can temporarily enliven a neighborhood in transition. Most of the buildings he buys and sells eventually will be razed, he reasons, “but in the meantime, let’s make them something.”

Preservons la Creation, which translates to “Let’s Preserve the Creation,” is a riff on The Creation of Adam, Michelangelo’s fresco painted on the ceiling of the Sistine Chapel over 500 years ago. Boileau’s mural will not last a fraction of that time (nor will the current state of Midtown), so go check it out today, join the festivities and get in on that “discussion of conservation and preservation” the project is meant to provoke.