Jaakko Pallasvuo’s works are massive collisions of digital techniques and non-objective abstraction. Somewhere between a “Magic Eye” optical illusion, action painting, and an explosion of every Photoshop technique in Adobe’s toolbox, these works became litmus tests of the state of abstraction and painting’s role in the age of digital reproduction. 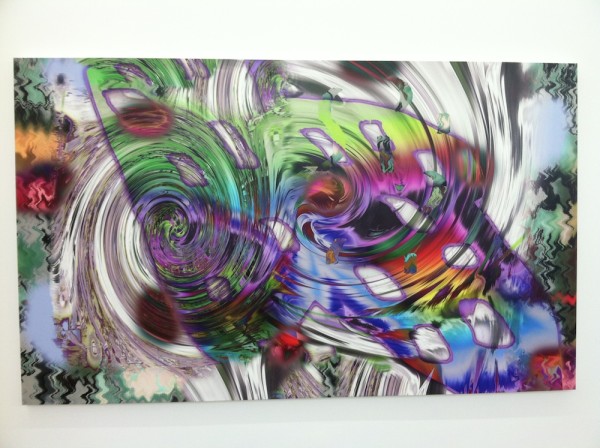 The show’s tagline, “paintings that have not been touched by the artist,” reinforces that these works embrace a digital, as opposed to analog, method of production. Despite what the artist might argue, this lack of traditional “touch” does not mean that this work eliminates artist’s hand. With every awkward use of the lasso tool or swirl function, Pallasvuo reaffirms his participation in this act of “painting.” While digital art is already antiquated enough to have its own section in survey textbooks, what Pallasvuo’s works offer to this conversation is a criticism that takes digital art to its eventual end through the guise of abstraction.

In his artist statement explaining what he has termed “Nu Paintings,” Pallasvuo thinks of these works as belonging in the art section of IKEA. Far from the ivory tower of the mainstream art world, the artist attempts to align his work with the mass produced and kitschy abstractions that adorn the walls of office buildings and doctor’s offices. The artist’s work never actually breaks from the art scene into the commercial market. The self-proclaimed bad boy remains protected within the walls of the gallery.

The works are art objects, sold for sums beyond the price range of the average IKEA shopper. To this end Pallasvuo follows the lead of any number of twentieth century predecessors, importing commercial and everyday sources and styles into the white cube. These works are not unlike Roy Lichtenstein referencing comics and advertisements in his works, Jean Michel Basquiat incorporating a graffiti style into studio paintings, or Richard Prince selling cigarette ads to wealthy art collectors. Pallasvuo uses this show as an opportunity to penetrate the art world with the ever-accelerating presence of digital imagery and the commercial golden-child, Photoshop.

But there is more to this work than a simple attempt to bring the digital into the gallery setting. With the influx of computer generated art, this act alone would hardly register as exceptional. What is noteworthy about Pallasvuo’s particular means of art creation is that it fuses the digital with abstraction, thereby regurgitating seventy-year-old criticisms for a new age of artists.

Pallasvuo’s works do not suggest that he is an expert with Photoshop. If anything, they imply a lack of skill and embrace a childish curiosity that was created due to intuitive chaos instead of closely calculated draftsmanship. What these haphazard compositions provoke in viewers is that sneaking though familiar accusation, “I could do that.” It is the classic Pollock criticism by those on the fringes of the art world, expecting artists to be skilled “masters” of their trade. If Photoshop’s most common function is to conceal flaws and churn out slick imagery, Pallasvuo’s digital paintings alert viewers to the growing ease through which digital manipulation is used. A cleanly doctored image barely registers among today’s viewers, whereas a crudely created canvas seems garish and almost novel.

The works are not IKEA paintings; they command too much presence and contemplation by viewers, though they act as a warning of sorts. What were once the new and discomforting become the norm and marketable. Pallasvuo’s work is a virtual call to arms, an embrace of digital media and the world of commercial prints, but one that is rooted in reintroducing the hand of the artist even when its creation removes his touch.

Jaakko Pallasvuo: Largely Abandoned Conventional Titles (Blueberry-Acai EDM + Omega-3) will be on view at The Goss-Michael Foundation from May 2- July 31, 2014.