Venomous Cabbage and Other Demands Satisfied

by Seth Orion Schwaiger May 31, 2014
FacebookTwitterEmail

GrayDUCK gallery reopened May 2nd at its new location on East Cesar Chavez in Austin. Leigh Anne Lester’s exhibition Venomous Cabbage and Other Demands Satisfied is an ambitious show of sculpture and drawing that fills the expansive new space. 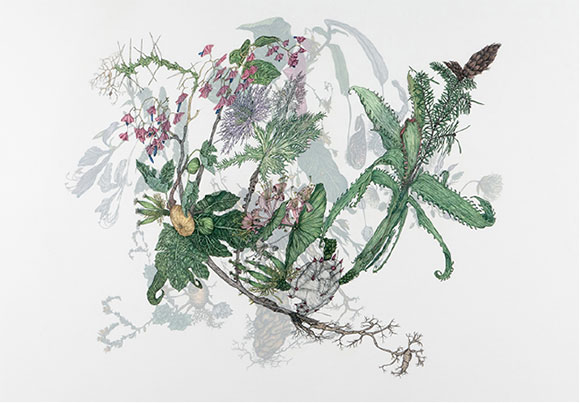 Lester’s new works toy with classical botanical drawing, coming close to falling prey to the lures of that historical genre. There have been many failed attempts to justify the seductive style within contemporary art, but such attempts mostly rehash the appeal of these historical drawings without adding new content, and without the impetus of recording new discoveries that compelled the original artists. 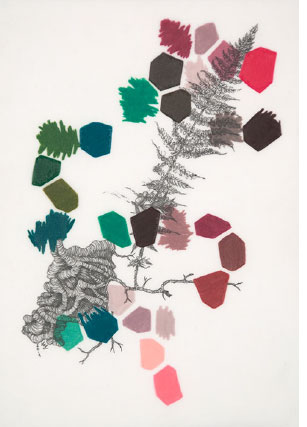 Lester, however, bucks the trend. Her works are undeniably more than a rehash of traditional source material. Lester’s compositions and palette are contemporary – that is, daring, unique, flirting with imbalance, yet undeniably calculated. Her subject matter follows suit. Part Punnett square, part Oryx and Crake, Lester touches on hybridization and genetic modification, an increasingly pertinent subject.

Working on semitransparent substrate, Lester depicts improbable plant adaptations, the products of multiple species spliced and grafted together to create complex tangled forms. Superimposed one on top of the next, the deepest layers become barely visible. The layered structure suggests genealogy, one species passing some of its traits on to the next. In many of the works, inexact interlocking shapes of varied color stretch over the plant forms without paying heed to the plant’s shape or borders, obstructing the careful line drawing, and making the drawings seem as though they are made of multiple separate compositions. The detail and complexity of each layer makes viewing them individually impossible. The layers separate and meld together, separate and meld together again in unending rhythm. 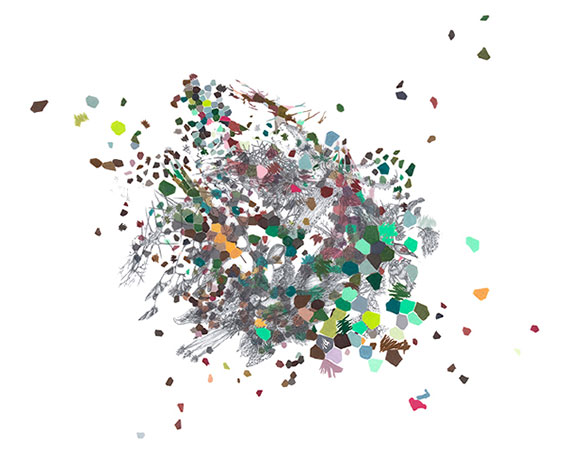 The overlaid colored motif seems suspiciously like coded genetic material. From one drawing to the next, the code mutates, and the mutation is reflected in the paired botanical drawings underneath. Conversing with Lester, it becomes clear how she overcomes the pitfalls of her adopted historical style. She sounds like a gleeful mad scientist, with the same fervor, the same excited sense of discovery of the artists/scientist who developed classical botanical drawing in the first place. 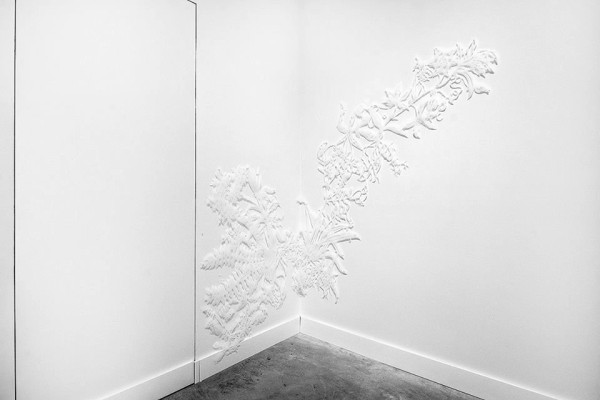 In addition Lester has hung some older works in a previous style: intricate white cutout plant forms whose shadows become more weighty than that which casts them. In conjunction with the layered drawings these shadow works take on the same genealogical overtones as their neighbors.

Lester’s show poignantly reflects GrayDUCK’s new premises, itself a hybrid space. A deft addition to a former residence, the new space has the bright, clean lines of their former first street locale, clerestory and concrete floor included. The refurbished bungalow, matte hardwood floors and plank wall paneling create a space with the clean sensibility of GrayDUCK’s former home, but without the sterility. Even the gallery’s new address, just east of I35, straddles the divide between polished city-center institutions and the rougher grassroots arts initiatives of East Austin. Like the new species in Lester’s drawings and sculpture, gallerist Jill Schroeder has adapted and spliced together multiple success strategies, hedging GrayDUCK’s bets in an environment formerly unfriendly to commercial contemporary art galleries. 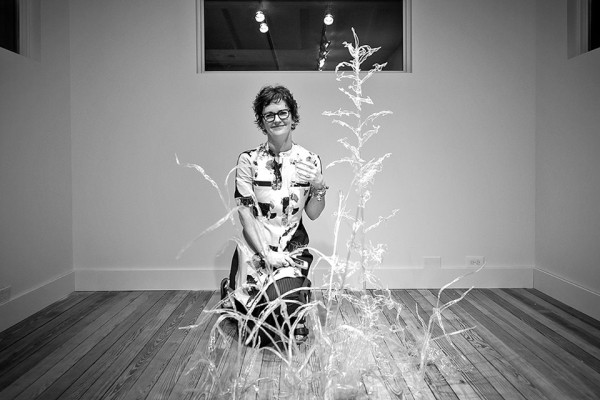 Lester also presents A Large Turf (after Albrecht Durer), an exciting sculpture from 2010 anchored to the old wood floorboards. Using clear, unblemished materials like plastic, plexi, and synthetic threads, Lester manipulates art historical source material into a convincing, and somehow intimidating mutation. I couldn’t help but wish this compelling work was taken a few steps further into an immersive installation, increased in scale to form an exhibition on its own. As it stands, it is a valuable facet to a strong symbolic show for GreyDUCK’s new hybrid space. Venomous Cabbage and Other Demands Satisfied is as satisfactory as its title implies. The exhibition does the gallery space justice and shows the prolific artist’s winning combination of conceptual rigor and honed craft.

Seth Orion Schwaiger is an artist, curator, and critic based in Austin, Texas and Glasgow, Scotland. Photos courtesy of Jeff Harris Photography and GrayDUCK gallery.