To Glasgow from Austin with love. Michael Smith’s Video and Miscellaneous Stuff from Storage (pt. 2) at Glasgow International 2014

by Seth Orion Schwaiger May 22, 2014
FacebookTwitterEmail

“Art washes away from the soul the dust of everyday life,” but there would be debate whether this oft-cited quote attributed to Picasso holds true in our post-post-modern present. University of Texas Professor Michael Smith disagrees. Smith’s recent solo show at Tramway as part of the prestigious Glasgow International 2014 visual arts festival in Scotland does not wash away the dust of everyday life. At it’s best it says “Hey! Look at this dust! Isn’t this interesting everyday dust!” At it’s worst it shovels on a few more scoops. 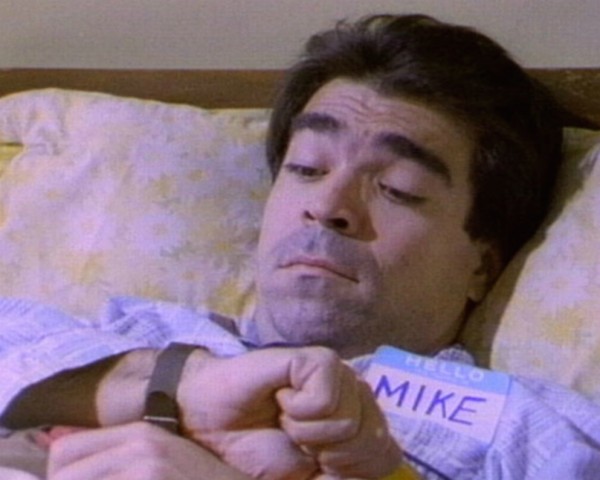 The video works and recorded performances, props and displays at Tramway primarily revolve around Smith’s recurring character, “Mike.” Mike is at once an Everyman and an eccentric, a dolt presented to us to reflect our own dolt-ness. Smith has given himself the troublesome task of creating art about a boring person, a boring life, in a way that isn’t itself boring. Some of his works achieve this lofty goal, or at least come close, and others do not. The success of these works hinges primarily on brevity.

Video and performance can demand a certain length of viewing that other media cannot. A sculpture, despite any great amount of time that was taken in its creation, has no remit in asking the viewer to stay put for 5 minutes and 11 seconds. A video work does. A painting cannot claim of its viewers that they have not seen it in its entirety if they have not sat gazing for at least one hour. A performance can. These are new media (pioneered by Michael Smith among others) whose etiquette has not yet been cemented, and in this there is a certain amount of trust that must be placed in the artist by the viewer. Perhaps it is the millennial attention span talking (it isn’t), but in some of Michael Smith’s lengthy works he has betrayed this trust. Simply put, he gets as much across in his 4 minute works as he does in his 40-minute works. There comes a point when watching Mike continually going back to his TV set to watch some asinine everyday show when the viewer can’t help but realize that they too are watching TV, and that they too have seen it before, and that they too are wasting 36 minutes. There are signs that this is exactly what Smith intends – the chair one sits in to watch Down in the Rec Room is indeed the same chair that Mike uses in the video – but if this is the case it seems like an incredibly self defeating aim, or worse, rude. Smith’s work operates better from a distance: it’s philosophically engaging to discuss, but viewing it can be tasking. 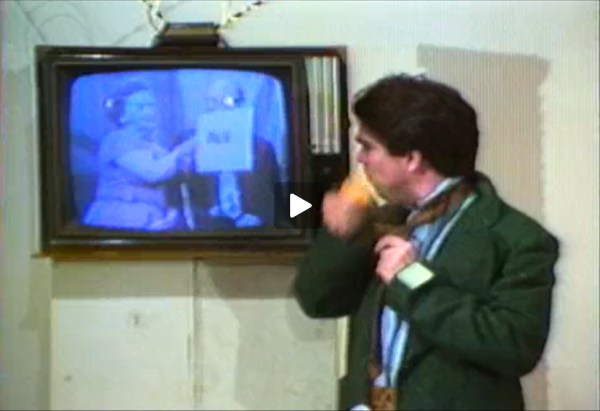 In the UK, Mecca of dry humor, Smith’s comedy comes across well, but his work takes on other troubles. Though Smith is no stranger to the international art scene, this is his first solo show in the UK and it isn’t apparent whether or not he is aware of how much Mike plays into many of the stereotypes those in the UK have about the US. In the States, Mike is an Everyman, but in the UK, Mike is every American. Mike is everything we are accused of abroad: a loud, suburb-loving, gullible, overly friendly, consumerist, foolishly optimistic buffoon who is helplessly and unknowingly out of fashion. As an expat, it’s painful to watch. 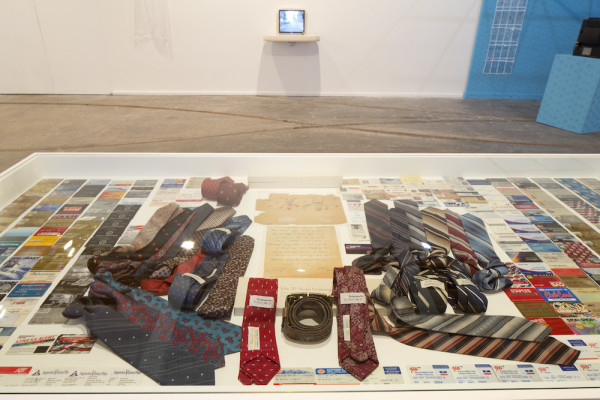 One work stands out in inspiring cringes. In the center of the first room, a large tabletop displays an excessive array of credit cards, debit cards, and discount cards in Michael Smith’s name dating back thirty years. Keeping them company are a number of unremarkable neckties, the kind you’d see around the collar of a car salesman or lower level businessman. In the center of it all is a letter written by a child who seems to have grasped cursive no more than a couple years before. The letter goes on in great detail about the allowance the child receives, its superiority to the allowance of others, his plans to ask for a raise from his father at the end of the year, and how he doesn’t know anyone who doesn’t like money or want more of it. It seems innocent – humorous, obviously juvenile, and something we can keep our distance from. In the UK, however, speaking about money at all comes with a set of baggage unfamiliar to us in the States. The implications of speaking about cost and income in the UK run deeper than the slight break in etiquette such talk would create in America. Money is a dirty subject in the UK, like sex or bowel movements, something that makes others uncomfortable. Bringing it up shows the deep social ineptitude of the person who does so. Americans don’t share such notions, and we are frequently seen as overly capitalistic and crude because of our lack of inhibition in this regard. Smith’s untitled tabletop work adds more fuel to the fire. The artist presents young Mike as a capitalist from birth whose idiotic ambition and crass readiness to speak about money continues into his pathetic adulthood, as evinced by this timeline of financial ephemera. From one angle, the work is endearing–Smith is making fun of his own culture, but from outside, viewing the work is like watching an exploitation film, playing right into baser notions of stereotypical America. 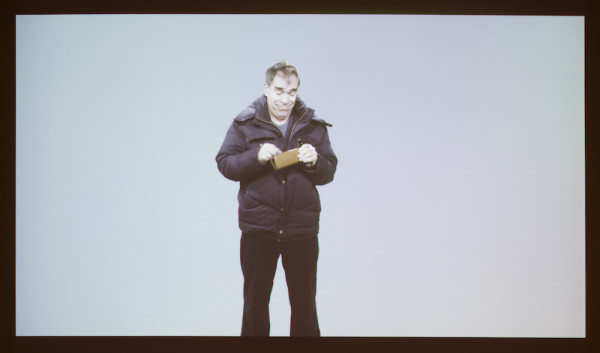 Despite this quirk of context, and the aforementioned monotony, there are some quite successful moments. In Avuncular Quest #5, Mike, or someone who might as well be, is the bumbling protagonist. The video loop shows the artist trying to locate one lost item after another on his person: an iPhone, his watch, his glasses (to check the iPhone’s time against the watch), his wallet, and so on. The work is succinct, and conveys the greater meaning behind the show without dragging on.

On the opposite wall, there is a brief break from Mike with a video of another of Smith’s personas: Baby Ikki is an oversized infant, in this instance crawling on the streets of New York in 1978. Ikki has all the same ape-man humor of Mike (the joy of watching someone who is dumber than you) but less the cynicism. Additionally, there is the slapstick comedy of watching someone misbehaving. Baby Ikki changing Station culminates in Ikki, an adult in oversized diaper, wearing a bonnet and a 5 o’clock shadow, being brutishly removed from a busy intersection by a concerned police officer, and bawling all the way.

Other successes include a subtle acknowledgment and explanation of the outdatedness of much of Smith’s exhibited work in comparison to the rest of Glasgow International which, generally speaking, boasts the cutting edge of contemporary art (including Jordan Wolfson, Charlotte Prodger, and others). 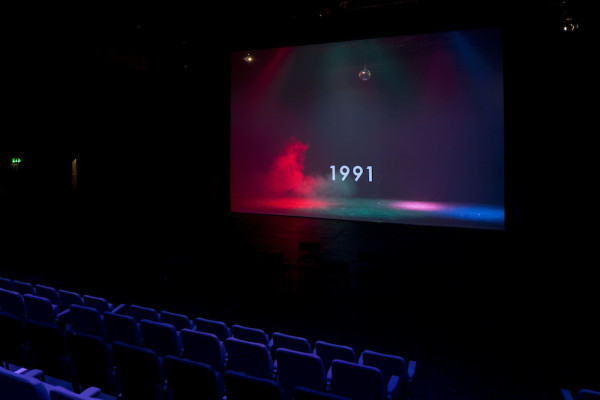 The second half of Smith’s show breaks out of the white cube and into a theatre hall. Taking a seat in one of many haphazardly scattered chairs in front of the rows of stationary seating, the viewer’s field of vision is filled with a massive semitransparent screen. In the room behind the screen, an oversized disco ball twirls over slow-moving wisps of fog lit by pink and blue light. Projected onto the middle of the screen, the years of Smith’s practice tick by in a bold font: 1980, 1981, 1982, etc. At certain years, corresponding video works play rendering the screen opaque. As each piece finishes, the far room becomes visible again, the fog machine pumps out a bit of smoke and the years tick by, picking up where they left off. The disco ball becomes a motif in each of these videos, a symbol for the sad non-glamour of real life.

It’s a clever curatorial double-entendre. It speaks in the language of retrospective, presenting the works as a thirty-year history building to Smith’s current practice and suggesting the artist’s influence on contemporary video and performance work, but also acts as a biography of Smith’s persona Mike and his clownish endeavors. The structure of this work simultaneously presents a fictional history in parallel with the actual, and is one of the strongest elements of the show.

As a whole, I can’t say that Michael Smith’s exhibition was enjoyable, but I’m not convinced it’s meant to be. It’s a study in what it is to be bland, what it is to be dull–a strange counterpoint to the frenzied excitement trending in contemporary art. Smith’s works certainly convey boredom, monotony, and non-glamour with just enough unlaughable wit as sweetener to make that pill go down. At times clever, at times not, the work is far from beautiful, a bit dingy in fact, but what dust the artist has shown us.

UT Prof. Michael Smith’s Video and Miscellaneous Stuff from Storage (pt. 2), exhibiting at Tramway as part of Glasgow International 2014 in Scotland, closed May 4th. All of Michael Smith’s videos can be viewed at his website, mikes-world.org.

Seth Orion Schwaiger is an artist, curator and critic based in Austin, Texas and Glasgow, Scotland.