Fetish and Figure at Fieldwork: Marfa

by Nicholas Knight May 2, 2014
FacebookTwitterEmail 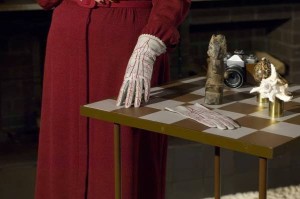 On Friday, April 4, curator Martha Kirszenbaum presented Fetish and Figure, a program of six films and videos at Fieldwork: Marfa, at the invitation of current research residents Pauline Beaudemont and Elise Lammer. Projected on the gallery wall in a continuous sequence were works by Kenneth Anger, Agnieszka Polska, Isabelle Cornaro, Shana Moulton, Ursula Mayer, and Michael Robinson. An episode of The Twilight Zone from 1960 completed the program, which ran for a total of 72 minutes.

The press release for the screening connected the works through their depictions of fetishized (and feminized) objects that incrementally take the place of the disappearing body:  ceramic pots, perfume bottles, shimmery dresses, sea shells, and fur–each one a container, as if for feminine subjectivity itself.  But the path to a tidy identity was not so simple, and another layer of signifiers crowded into the symbolic field of these works:  camera equipment, modern architecture, prisms, Egypt. The explicit connection amongst the works, not named in the press release, was the dream.

One can’t tell the history of 20th century art without talking about dreams as subject matter, and there has been a recent return among younger artists, especially in Europe, to the visual language of Surrealism.  Perhaps this is because the opportunity to “stop making sense” is an effective way to resist the totalizing advance of “branding.” Video as a genre in contemporary art exemplifies this resistance.  It is, in relative terms, easier to gum up the narrative works, and harder to assimilate as luxury decoration. This confluence seems to hold a particular appeal as a space for restating a feminine subjectivity that articulates its contours in the absence of dominant (male) expectations.

That is a bit of a mouthful. All the videos were rich with referentiality, demonstrating that both the artists and Kirzsenbaum had done their homework.  The centerpiece for this viewer was Mayer’s The Lunch in Fur / Le Déjeuner en Fourrure (2008), with its allusions to Meret Oppenheim, Last Year at Marienbad, Man Ray, and more.  The work, like the entire program, deployed its symbols in a careful way, letting them work on the viewer without being asked to “mean something.” The concluding Twilight Zone episode, in which a young woman doesn’t realize she is actually a department store mannequin, put a fitting and sinister feather in the cap of an excellent evening of viewing.

Fetish and Figure was curated by Martha Kirszenbaum at Fieldwork: Marfa on Friday, April 4, 2014.