The exhibition, on display at Austin’s Lora Reynolds Gallery, is an exploration of the perception of “the Other” in the American context. The exhibition is in several different media and challenges the viewer to the point of discomfort. 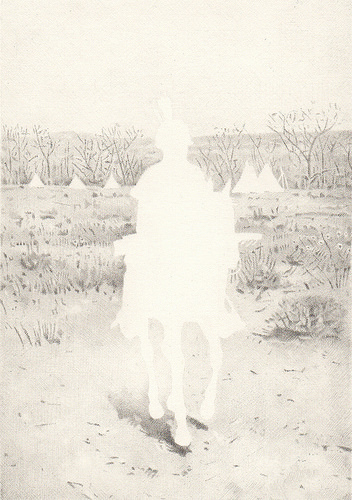 The drawings, all recreations of paintings by Henry Farny from the 19th century, are absolutely stunning. The crosshatched detailing makes the landscape come to life while accentuating the hollow silhouettes. Absorbing the drawings and being faced with the literal removal of the Native Americans from the drawing make the historic removal that much more familiar and tragic. 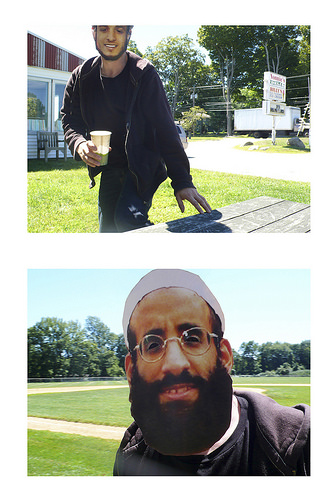 The second group Molloy addresses in NATIVE is people of Middle-Eastern descent and their treatment following the events on September 11, 2001. Citizen is a haunting series of four photographs in which Molloy is doing mundane things such as grabbing a Starbucks coffee or stepping out of a car. In each of the photographs, Molloy has on a paper mask of an American citizen killed by US drone attacks in Yemen. The photos are eerily reflective of the lack of protection one has, even as an American citizen, when constitutional rights are trumped by paranoia and profiling. 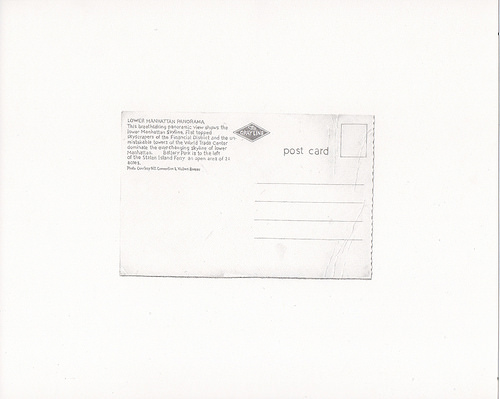 Continuing the theme of the American psyche post-9/11, Postcard is a series of drawings of the backs of postcards. From reading the short paragraphs, the viewer can tell each postcard is a photo of the World Trade Center. As I read the positive descriptions of the structures, I felt saddened that I couldn’t see the picture on other side, but the other side no longer exists just as the towers no longer stand. 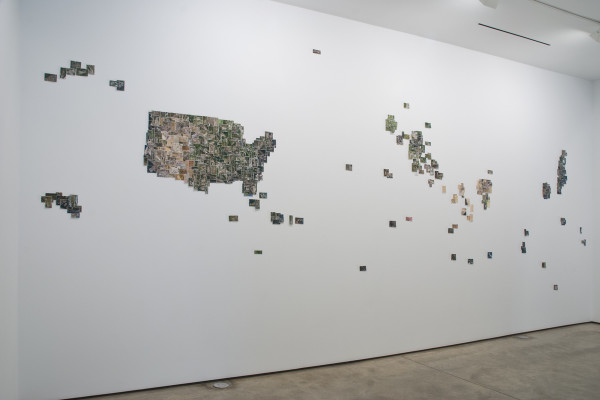 NATIVE also explores cultural tension in a geographical context. Base, my favorite of the works, is an implied world map comprised of over 600 aerial photos of US military bases. The work made me feel tense. I was left in awe at how close to complete the map seemed, at how many parts of the world that felt so foreign to me still had a combative presence from my country.

NATIVE is as tense and disruptive as it is beautiful. The message is relayed easily and subtly through intense yet simple works of art. To fully appreciate the works, one must be vulnerable to the guilt they elicit and that’s what makes it so tragically captivating.

NATIVE is on view through May 10 at Lora Reynolds Gallery in Austin.