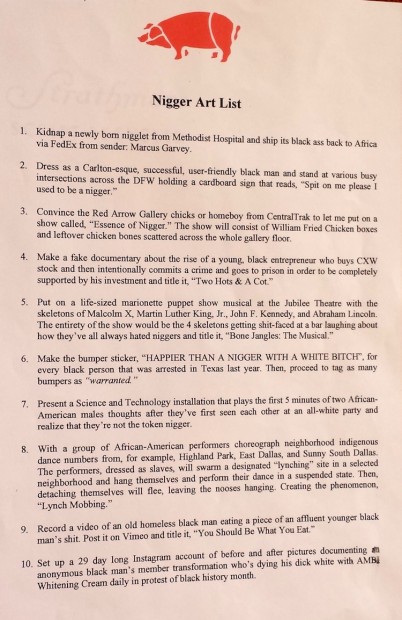 Last August, Glasstire writer Darryl Ratcliff penned a piece about the mysterious letter, dubbed “The Black Letter,” that showed up at various Dallas galleries and private addresses last summer. The letter is essentially a satirical look at the place of African-American men within the art world, which amounts to very little.  It caused a tremor of discomfort among the art scene. Ratcliff said that “The greatest success of The Black Letter is channeling this emotional reality into a physical object and confronting a gallery world, which in terms of race, prefers the polite over the provocative.”

It came on our radar that a response to Ratcliff’s analysis of The Black Letter and its message was posted on Art21’s blog last month by SMU’s curatorial fellow Sally Frater; in light of Ratcliffe’s most recent look at race in the art world, this time a take-down of Dallas’ Contemporary Art Dealers (CADD), Frater’s perspective on whether or not “satire is an effective way to dislodge racism” is worth a look. “His satirical letter flattens the experience of being black into little more than incidents of degradation,” Frater says. “And although draws attention to issues of race in the art world, it does not do enough to move art audiences forward and beyond complacency.”

In other news, Darby English was just hired by the Museum of Modern Art to act as consulting curator in the department of painting and sculpture, specifically to help increase that institution’s holdings in art by black artists.