Standing alone in the center of the dimly lit gallery at Women and Their Work, I felt slightly uncomfortable. 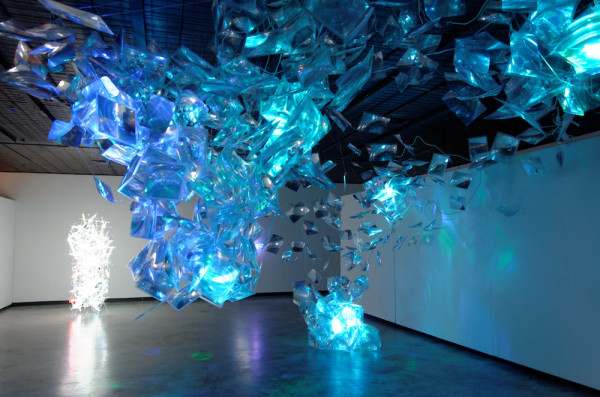 Ice Lumens, an enormous installation of magnifying plastic and blue light towered over me as other works in Adela Andea‘s Lux, Lumens, and Candelas produced alternating lights and soft sounds in my peripheral vision. The contrast between the dark gallery and the intricate, brightly illuminated works made Andea’s installation tense and abrasive. One piece has a rotating handle; about every 15 seconds it would fall and make a soft noise, like a very slow but consistent heartbeat. It startled me when it first occurred, but it quickly became like clockwork, punctuating the subtle, constant noise of the many fans.

Ice Lumens was overwhelming. A cloud of plastic magnifying lenses hung from the ceiling by wires. From a distance, the lenses and lights created a soft texture. Driven mostly by its size, it was less intricate and was a more static, less stimulating work than others in the installation. 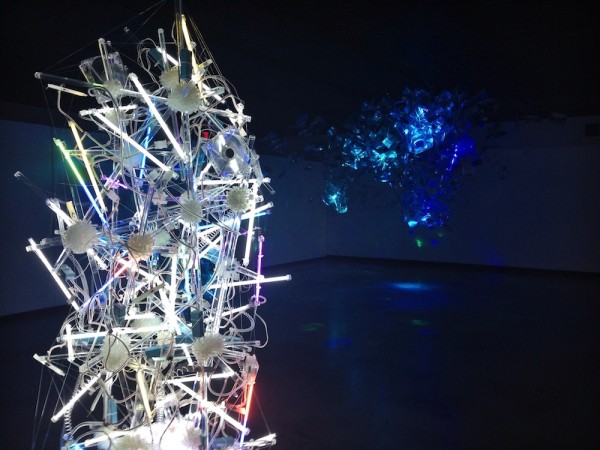 White Crystalline is an illuminated sculpture that seemed to be comprised entirely of an entanglement of wires, fans and lights. As I deconstructed its complexity, my own personal realities were revealed, specifically my relationship with my iPhone. It’s one piece of technology that has what seems like a million little components to it, but the final product is a singular device that drastically simplifies my life. Andea’s work made me realize my relationship with technology was powered more by the technology than the use I make of it. 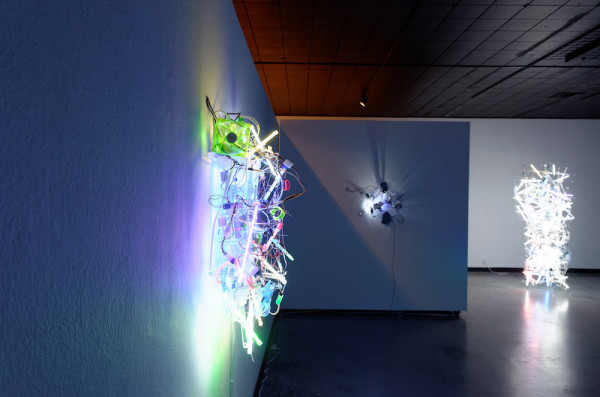 Andea’s artwork is constructed with technology, but not like typical technological products such as my phone or laptop. Since her works aren’t technically completed products with set functions, they spark an internal conversation about what technology is and what part it plays in our daily lives. The small LED lights hooked to wires and submerged in water in Techno-Alchemy illustrated that technology can even spark nostalgia, as I cringed at the mix of water and electronics and recalled my mother’s warning against it.

Andea’s work has a powerful presence that sparks a sense of uneasiness that is washed down with a bit of self-discovery.

Adela Andea’s Lux, Lumens & Candelas is on display at Women and Their Work through March 20, 2014.