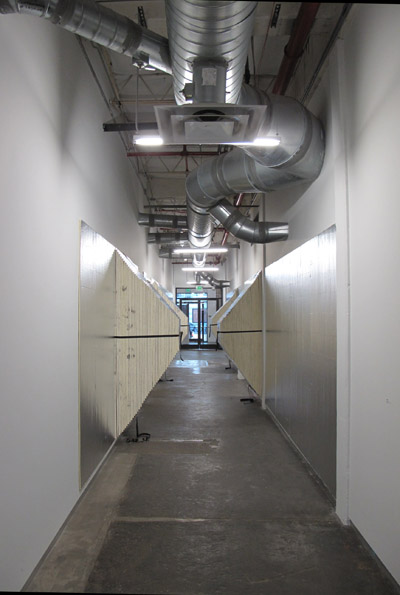 Arthur Peña’s slight shift, steady hand, begins with gentle coercion. Peña has lined the central hallway of the Dallas Contemporary with foil-backed foam insulation board; four blunt pyramids of the same material obtrude into the hallway like Jersey barriers, making it about a third narrower. 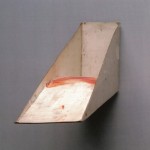 Viewers navigating the show’s first piece, Attempt 104, must veer first to the right, then left, then right again, threading the mildest of obstacle courses.  Its reminds me of Bruce Nauman’s Eye-Level Piece (1966), in which a simple bit of bent cardboard makes a subtle, but undeniable demand that viewers stand on their tiptoes.

To avoid the speed bumps, you have to look at them. Nicked and dimpled, held together with ordinary drywall screws, the big pyramids aren’t fussy or pristine. Although probably very lightweight, they are held to the wall by tight nylon packing straps, ratcheted down so they dig into of the foam, as if it were straining outwards with great force. The repetitive stacking of layers implies a mania: if not restrained by the black straps (like a straightjacket!), the bumps threaten to bulge even further into our space, like pregnant robot bellies, or a space-station cargo pod bursting with tribbles. 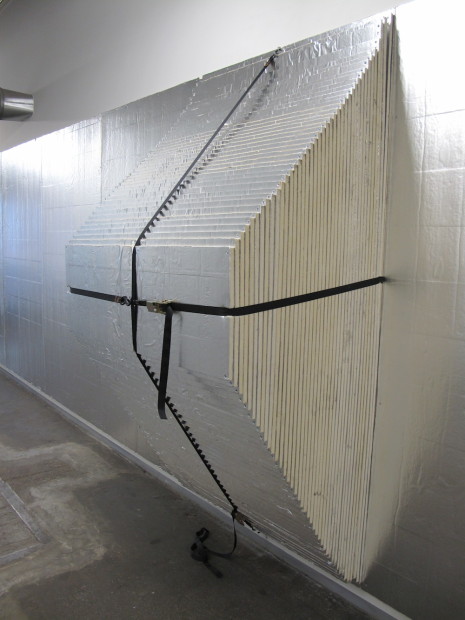 The work, though abject, has a silly, space age, industrial aesthetic that goes well with the Dallas Contemporay’s repurposed building. The ceiling in the gallery/hallway is an aorta of spiral ductwork, air-conditioning the DC’s cavernous exhibition spaces. The silvery industrial ducts merge seamlessly with Pena’s piece, which acknowledges the space, both as a human pathway and as a mechanical service corridor. Attempt 104 is installation art in the classic sense. 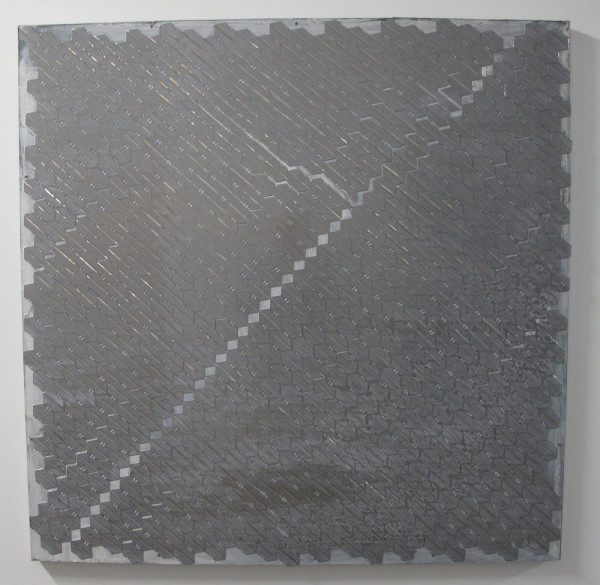 Four-foot squares of drywall are tiled with sharp new utility knife blades set edge to edge to create a zigzagging pattern. Into this shining geometry, Peña has introduced errors by breaking the tile setter’s #1 rule: begin at the center and work outwards. In each panel, aptly titled Attempt 102 a, b, c, and d, Peña begins laying down blades at opposing corners or edges and works toward the center, inevitably leaving irregular gaps where the blades don’t exactly meet. It’s all about how hard you’re going to try, and how much you value product over process, but there’s a little fudging: about ¾ of the way down on Attempt 102a, it looks as if Peña introduced a purposeful error. 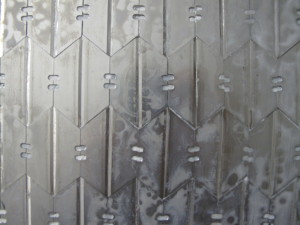 Each Attempt produces a shimmering wall of steel blades, dangerous and decorative, like armor, but with regrettable gaps. Unlike 104, which played off architecture, Attempts 102 a-d are more art-centric: they explicate the act of producing a standard art object, a decorative four-foot pattern painting, by making the process of its manufacture evident. Peña embraces the artist’s endemic dissatisfaction. The errors in the piece’s patterns can be seen as symbols of the perpetual state of imperfection that is the avant-garde artist’s traditional stance towards his works, each being only the latest, less than perfect, attempt at realizing an ever-evolving vision. Hence Peña’s tentative titles. 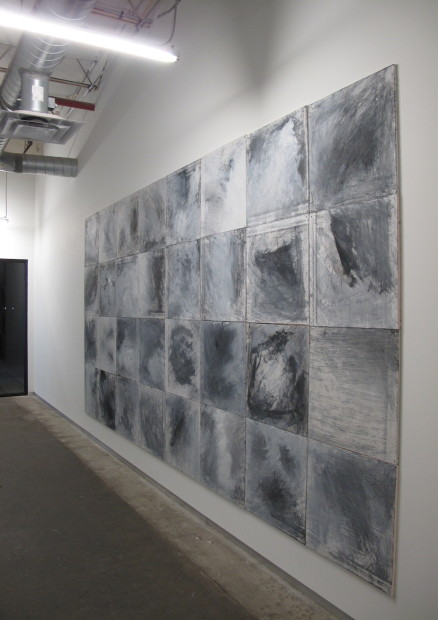 Attempt 103, at the far end of the hallway is a pair of enormous grids of two-foot squares of drywall, scrubbed and scrabbled with gestural gray marks like well-used dog doors, or the bottom of a mop bucket. Like the blades, the squares are  laid imperfectly, with little half-inch and quarter-inch dislocations that add just enough of the artist’s hand to subvert the grid. Ironically, in comparison with the gentle, almost apologetic hanging, the marks in the “paintings” look furious, but mechanical. 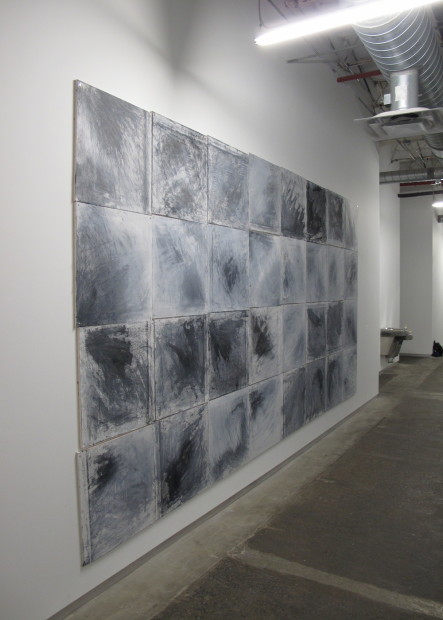 Once again, the compressed space of the hallway is necessary: if you could see these pieces from a distance that hid the raw gypsum edges of the drywall and the oh-so-minor flaws in the hanging, they could easily turn into airport art: oversized, decorative, slightly melancholic atmosphere painting suitable for an avant-garde funeral home, or the beach house of a moody screenwriter.

Peña’s pieces aren’t much to look at. Gray and understated, they trail off from a flashy, trashy beginning to a collection of dispirited gray smears like wallpaper. If you’re looking for color, or story, or uplift, keep looking. What’s great about Peña’s show is its in-between-ness or, to use artspeak, its liminality. Literally wedged in a crack between the DC’s exhibitions, slight shift, steady hand is art without capital letters about the slight, persistent, humanism that appears, as if by magic, in the gaps between what is intended, and what actually occurs.