In the early 1970s, two University of Houston (UH) student artists came up with a plan to celebrate Mexican-American culture as a project of the Mexican American Youth Organization (MAYO). The UH student group felt that the lack of diversity on campus called for a mural to celebrate “a new era of racial and ethnic integration” and so Mario Gonzales and Ruben Reyna created the 9’ x 44’ La Marcha por la Humanidad, known as the Chicano Student Mural, which depicted 500 years of Hispanic history. The iconic mural has been a centerpiece of the student meeting space, the Cougar Den at the University Center (UC), for almost 40 years.

In 2008, plans to renovate the UC were approved but the fate of the mural was in question since it was never officially part of UH’s Public Art Collection. In fact, the proposal to make it so, presented to UH’s System Wide Arts Acquisition Committee (SWAAC), noted that “Gonzalez has taken it upon himself to stop by every so once in a while to clean the mural over the years.” But after some petitions and proposals, plans did move forward, art conservators were hired, and it was announced that the newly transformed bookstore would be worked around the mural. 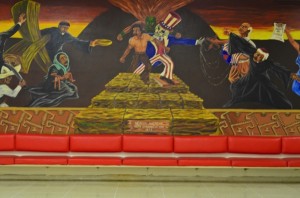 In a September 2012 article in UH’s Daily Cougar, everyone seemed happy. “I am flattered and honored that UH students have made it possible for the mural to survive,” Reyna said. UH’s senior project manager laid out the plans: “The bookstore with the mural is expected to open at the end of 2013. Prior to or around that opening time, Mario will be adding to the mural by painting an additional lower section.” But that didn’t happen. According to today’s Cougar, Gonzalez was told in December that there would be “no new additions.” Gonzalez reacted: “I feel betrayed, betrayed by the same people who voted me off my mural 40 years ago and by SWAAC, who conveniently took their side in prohibiting me to finish my mural.”

Many are simply pleased that the mural has survived to share its history of the Mexican American civil rights movement. Students, professors, alumni and historians celebrate its cultural relevance; even the general manager of Barnes & Noble at UH got into the spirit: “We are excited to have such an important culture piece of the University’s history reside in the new bookstore,” he told the UH News. “I believe the store’s designers did an amazing job with the furniture, color, design and layout to complement the mural.”