Could there have been any more dissatisfaction with the official program commemorating the fiftieth anniversary of the assassination in Dallas of John Fitzgerald Kennedy? How could one program contain it all? An event like this—highly anticipated, redolent with emotion and freighted with significance—would always be a hostage to fortune. We heard of Dallas in the 60s as the city of hate and a city divided, and we were invited to look upon our own cultural renaissance and to draw the appropriate conclusions. Some of the official party were less convinced of the distance traveled over the past fifty years, and had the courage to say so. It seemed on that day that Dallas would need more than a few Calatrava bridges to rejoin its broken social fabric.

“The Artists’ Commission”—organized by Sally Warren at Gray Matters, Dallas—is an ambitious project that covers the same ground of the official spectacle and more. All the unloved aspects of the Kennedy assassination—the murder of the prime suspect, the Warren Commission Report, the mottled political and cultural legacy—are rummaged through and fashioned into works of art. I would say that all these works are nipping at the heel of an illusion: that great and profound maxim or monument that should sum up the state of our fallen society and offer a catharsis.

Gratefully, none of the artists here have bought into that set of false expectations. These responses to Sally Warren’s charge to confront the “unexamined political and cultural issues in Dallas and the US” reflect a cunning knowledge of the impossibility of such a brief. Being artists, all the participants must convince us that no theme, however complex or vaporous, may resist the siren call of aesthetic form, but the works “work” best when they respond to the brief while circling back and confronting the very concept of a historically spacious and critical work of visual art. The artists’ success here is a kind of Pyrrhic victory, perhaps the only kind available to such a project.

There are no moral headlines to take away from this exhibition, no cathartic episode to refresh and renew the body politic. Instead, there is art, rhetoric, poetry, and blank irony. The tone is one of bewilderment and evasion; weighty themes leavened by light comedy. 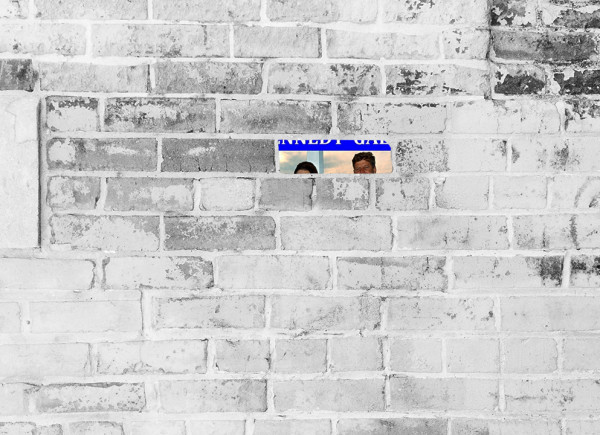 Carolyn Sortor, ask not | art thou (or, The Most Lamentable Tale of Pyramus and Thisby; or, JFK gets spanked), 2013, (video still)

Two video works in the exhibition engage in oblique, comic approaches heavily dosed with artifice. A short piece from Susan Magilow and Susan Teegardin—“The Susans Deconstruct the Headlines”—was created in 1988 but justifiably included because of its relevance to the theme. Carolyn Sortor’s Ask not | art thou (or, The Most Lamentable Tale of Pyramus and Thisby; or, JFK gets spanked) (2013), a longer, meandering but charming video, is a microcosm of the exhibition’s brief in that it challenges us to consider how ramified a work of art can be before it collapses under its own weight. The piece reveals itself to be a true burlesque, as we are treated to a twirling figure of Jackie Kennedy resplendent in pink Chanel, gliding across the screen like some kind of evanescent sprite. 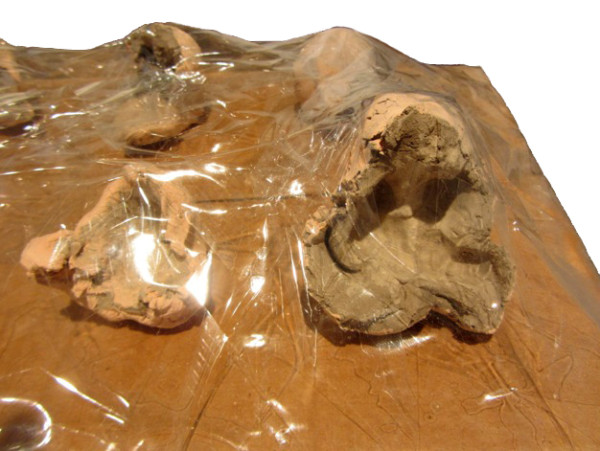 Sarcasm and desperation are perfectly balanced in Sortor’s video; elsewhere across the exhibition we are invited to consider more macabre works. Mary Walling Blackburn presents us with fifty pounds of clay, sculpted into palm-sized depictions of the fallen President’s blasted cranium. We are asked to imagine these loathsome souvenirs—bite-sized versions of Jean Fautrier’s Tête de Partisan—sold alongside other more sanitized memorabilia in the gift shop of the Sixth Floor Museum. Plated in gold or silver or fashioned of pewter, would these skulls be out of place in a store that trades so politely on death and horror? 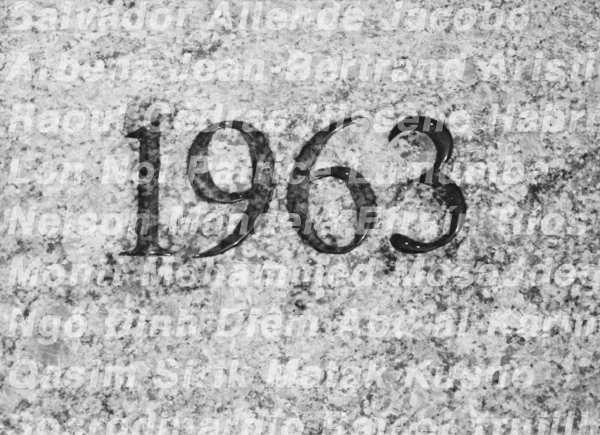 Laray Polk will have none of this light-hearted sleight of hand; certainly not the guff that comes of drawing an analogy between the real-life Kennedy Administration and the mythical Court of King Arthur. Camelot-on-the-Potomac can hardly command the imagination of a generation weaned on 9/11, the second Iraq War, the recession of 2008, and an emerging genocide in the Central African Republic. Polk’s uninterrupted list of international political crimes and humanitarian disasters coincident with the year of the assassination invites us to consider with amazement how anyone conscious during the early 1960s could have mistaken the regnant power of American foreign policy for a benign fantasy of courtly romance.

Other artists in the exhibition follow this thread to good effect. Lou Mallozzi’s sound installation, Peers (2010), is the recording of a chorus of twelve individuals who recite in unison every word uttered by Lee Harvey Oswald (and presumably transcribed by police, FBI, and the news media) between his capture and the moment of his death at the hands of Jack Ruby. I am not sure that the artist’s intention to offer us Oswald’s posthumous testimony through the symbolic device of twelve exclaiming “jurors” is fully realized; instead, I found the work tremendously moving because of the prosaic language employed by this most famous of alleged perps. The banality of question and response is truly disturbing, while the uninflected tone and labored rhythm of the chorus’ delivery simply magnifies the sense of tragedy and waste.

For most—if not all—of the artists here, the difficult task was to come to terms with an event of world-historical proportions that occurred while they were infants or prior to their birth. Some of the most successful employ a strategy that measures myth against reality or everyday routine. The works of Noah Simblist, Kurt Mueller, Heyd Fontenot, and Savannah Niles are particularly keen in this way. Simblist’s Cenotaph tackles the task of mourning through deceptively modest means: projections of single words making up the phrase “mourning is an action shot through space” are intercut by images of Phillip Johnson’s Cenotaph memorial for JFK.  Johnson’s version of the open, empty tomb is a public plaza hemmed in by concrete on all sides; ironically, it is a place that relatively few Dallasites have visited or even know.

Mueller’s Shot offers a five-and-one-half-minute video loop of the prime assassination site. The video shows the visitors’ attempts to photograph the two white X’s on the tarmac of Elm Street; improvised monuments that correspond to the location of the President when the bullets found their mark. Because this is an unauthorized memorial located in the middle of a major thoroughfare, traffic proceeds as normal along this historic stretch of road. We are agog as image-hunters in the video dodge vehicles and risk getting hit.

Fontenot has created a superb nude double portrait of Travis LaMothe and Lauren Richman—artist and art historian—in the “style” of Jack and Jackie. It’s the kind of caricature that would be at home on the cover of the New York Review of Books or available from an enterprising street artist in just about any large city: sweet and snarky at the same time. Niles has authored Tether, an interactive website which allows anyone, as the artist puts it, to memorialize a loss that is tied to a specific location by “pinning” a white X and an associated block of text to a specific location on a map. According to Niles, the X’s drift away from their point of origin and when a user clicks on an X, she can see how far from its original location it has travelled. The user’s choice is to re-tether the X, or to allow it to continue to drift. 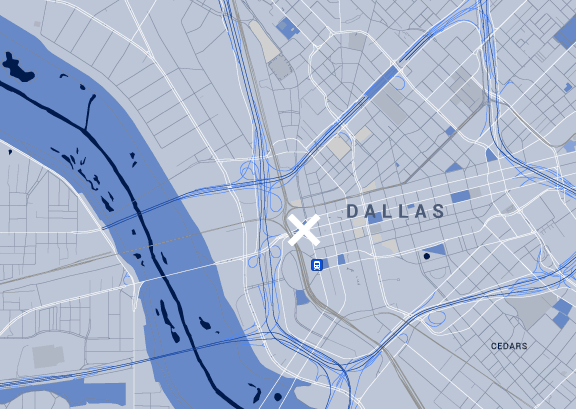 I find Niles’ work to be emblematic of the deeper currents that inform the entire exhibition. It reveals eloquently and economically what most of us know: we are unwilling to allow this particular memory to drift, either into a sea of forgetfulness or to be gathered up and molded by others into some unrecognizable or irrelevant avatar of the past. Yet, as the works of this admirable exhibition proclaim, when it comes to tethering memories, so much depends on finding a true and solid pier on which to moor them.

Michael Corris is an artist and writer on art.