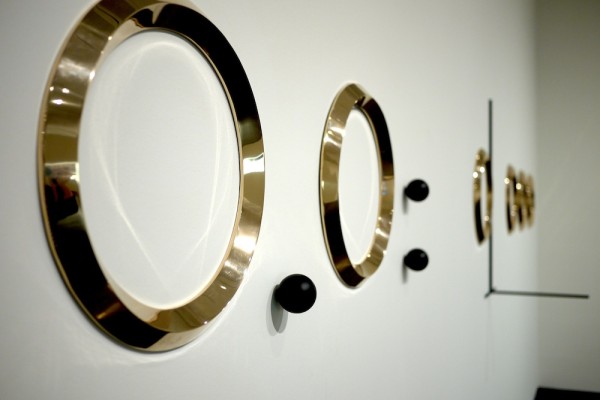 In a word: Swank, and all that that word brings to mind, positive and negative: saturated style, confidence, nostalgia, sex, gloss, perfection to the point of sleaze. You can smell the cologne here, expensive and liberally applied. The works reach out to you and say, “Why don’t you relax and sit on the leather sofa while I mix you a drink?”

Waltercio Caldas’ craftsmanship is obscenely perfect. It’s the type of art you want to roll your eyes at, but you just can’t find the flaw in to give you an excuse.  Any evidence of the hand of the artist has been relentlessly scrubbed from the work. What is left feels more like wandering through the mind of an eccentric 60s furniture designer, rather than through the Blanton.

He has a designer’s curiosity with materials and obsession with finish, and uses these tools to play with our notion of reality. He can make the air between two thoughtfully placed strings feel inexplicably heavy and a block of granite seem as though it will float into the air at any moment. 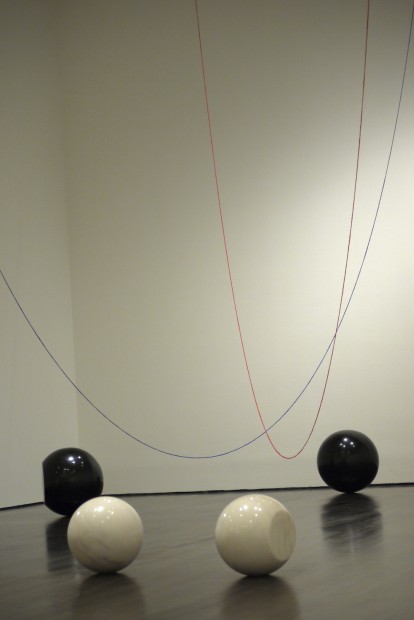 At first glance, Caldas’ works read as purely formal exercises in space, light, line, volume, texture and material, and many of his works are just that. They are refreshing in a way, but one can’t be satisfied with an entire meal of palate cleansers. Fortunately, a few works jump out with more substance; some offer up a sly wit. Other, more cerebral works question the transmission of information and its storage in a physical, technological, and biological sense. Guest curator Gabriel Pérez-Barreiro (Director of the Collecíon Patricia Phelps de Cisneros, Caracas and New York) has orchestrated a consistent rhythm throughout the space, with each type of work balancing the other. The viewer bears the gravitas of a conceptual work, only to be relieved by the levity of a more playful one, or one composed of strictly formal considerations.

Espelho con Luz (Mirror with Light) is one of the few works that seem to encompass all three of these modes, and is arguably the strongest. A sleek, rectangular framed mirror hangs on the wall, unornamented save for a small yet somehow intimidating red light mounted within the mirror at the bottom right, paired with a metal push switch. Its simplicity makes it seem formal or design-oriented. This troublesome light, though, pulls the viewer through that first reading with the allure of humor. It is hard to see yourself in the work and not feel like you’ve entered a spy movie from decades ago. After the humor slips back, one is left wondering what the switch really activates. Turbo-boost? Self destruct? Swagger? Any number of personal modifications and adjustments inevitably come to mind when one is met with one’s own reflection. 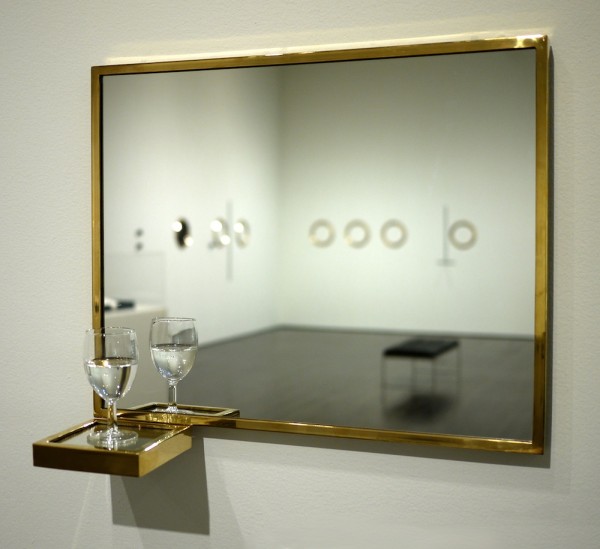 Caldas highlights the strange phenomena of seeing oneself, and choosing. Reflection carries this theme through many of the works on display and pulls the viewer into works that could otherwise be held at a distance. This is the sweet spot in contemporary art, or for any art for that matter: multiple pertinent reads, an entry point into the work, and deeply considered execution.

For this, I can forgive Caldas of the pile of constructions he has named Proximos. It’s not his fault, I know, but for any of us who’ve spent more of our time after 1980 than before it, such overt references to jazz in visual art is a sort of mortal sin. Is Starbucks to blame? Every chain of coffee shops, bookstores, and midrange hotels has latched on to the idea that pseudo-representational visual art referencing jazz is conveniently non-offensive, inexpensive, and appealing to the middle classes. They’ve worked the horse to death with print after monotonous print, things with names like “Syncopation in Blue # 5” and “Cosmic Saxophone,” and thus poor Caldas’ Proximos can now only been read in this context. Perhaps those wiser, perhaps older, or perhaps those with less of a U.S.-centric view, can pull something out of the conglomeration of metal rods terminating in high-hat-like flares, or in Trombone, flagrantly mimicking the geometry of the instrument whose name it takes. 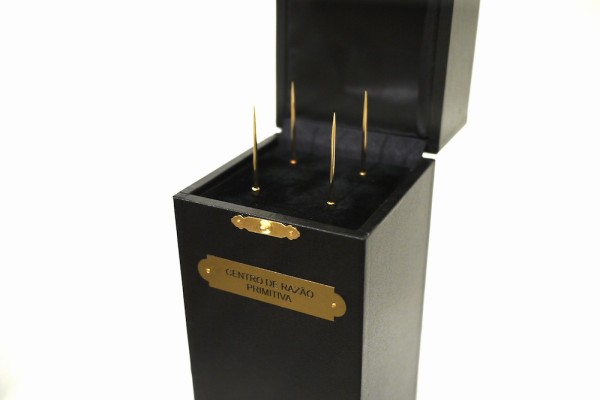 Across the expansive gallery from these these cliché-plagued efforts, are a number of quiet works on paper and a sculptural curiosity certainly worth noting. Centro de Razao Primitiva (The Center for Primitive Reason) is a flawless black box about the width and depth of a beer coaster, and approximately a foot tall. In a different context, one might assume it held a rare Scotch; as it is displayed, it seems more precious, but equally intoxicating. The box is hinged; its top quarter opened to expose a seductive velvet interior. Seated in this luxury are a square of four upright gold needles of a size and fashion that renders their use indiscernible. One would think that the sumptuous materials would candy-coat the nefarious forms but, surprisingly, they augment darker interpretations. Caldas professes to refrain from constructing narrative in his work, but one can’t help but reach past the sheer object-hood of the sculpture and try to tease out something more. In support the non-narrative claims, Caldas’s works have been compared to the still-life tradition, but even still lifes are chock-full of story, allegory, and metaphor. 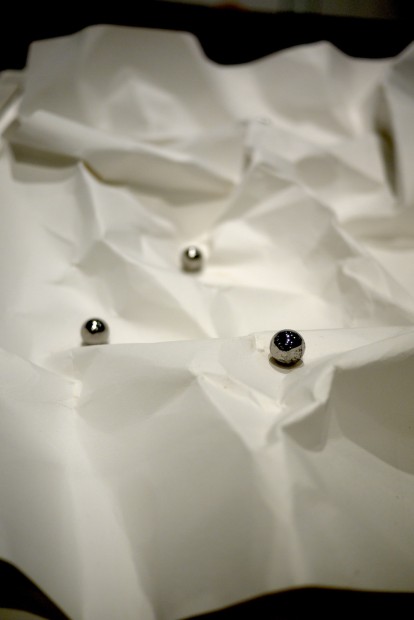 Other highlights of the exhibition include Convite ao raciocínio, with an unlikely turtle shell. é= is a falsely-haphazard arrangement of crumpled paper and steel ball barrings with a flirtatious sense of play. Relógio, a framed draftsmanship-inclined work, is clever and balanced. In O louco (Madman), a solitary miniature lead traveler the size of a fingernail, carries his burden across the expansive velvet wasteland of a lavish antique wooden case.

I have not listed Caldas’ installation works though these are also quite powerful—be sure to step into them when you can and keep an eye out for his peculiar use of red in these and other works. It’s as though everything in this hue is unaffected by gravity, like floating notation in a blueprint that refuses to stay in two dimensions.

The Nearest Air is an exhibition of paradoxes and impossibilities. One of Brazil’s most important visual artists today, Waltercio Caldas boasts an impressive career and for good reason. The show is eclectic yet consistent in its aesthetic and vision, and the impeccable craftsmanship deflects easy criticism. The work straddles many movements ranging through minimalism, geometric abstraction and neoconcretism, and incorporates outside influences such as architecture, furniture and product design into a seamless whole. It’s swanky to the hilt, but also smart, and certainly worth the experience.

The Nearest Air: A Survey of Works by Waltercio Caldas at The Blanton Museum of Art in Austin is on view through January 12, 2014.

Seth Orion Schwaiger is an artist, curator, and critic based in Texas and the UK. He received his Bachelor’s degree from the University of Wyoming and his Master’s from The Glasgow School of Art. His research interests include the development of arts systems with particular focus on the growth and direction of urban and regional art scenes in relation to larger national and international trends.