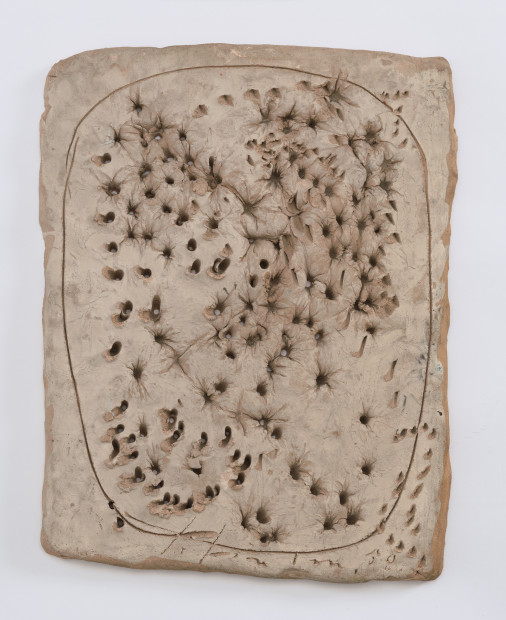 How to say this? Oh, yes: ceramics make me lusty.

I could reduce that word to something tamer, like “excited” or “thrilled,” or maybe something sweet, like “delighted,” but something in the nature of clay’s ability to be all at once  fleshy, smooth or resilient makes all of those other words polite lies. The feeling that things in clay give me is, not to mince words, nothing short of a desirous urge. Possession of some kind is in order.

I’m not alone. There is a scene in Jonathan Lethem’s novel Chronic City in which a group of friends finds themselves transfixed by the image of a ceramic vessel for sale on eBay, a chaldron.

The glowing peach-colored chaldron smashed all available frames or contexts, gently burning itself through our retinas to hover in our collective mind’s eye, a beholding that transcended optics. Ordinary proportions and ratios were upturned, the chaldron an opera pouring from a flea’s mouth, an altarpiece bigger than the museum that contained it. The only comparison in any of our hearts being, of course, love.

Just so were my feelings at Dallas’ Nasher Sculpture Center’s latest exhibit, Return to Earth: Ceramic Sculpture of Fontana, Melotti, Miró, Noguchi and Picasso, 1943-1963. Never mind that Lethem’s chaldron is eventually discovered to be a hologram, my feelings for the work here at the Nasher are founded—all of these objects are real, and all are from humble clay. An opera pouring from the mouth of a flea, indeed.

The operatics of the ceramic objects on display here track the medium at a fraught time in the world—post WWII—when the whole planet found itself in a transitional moment, struggling to adapt to a world radically altered by violence, sorrow, and disillusionment. Most of postwar Europe and Japan found themselves in ruins, with widespread poverty effecting people of all walks of life. Faced with such a shattering, artists took to using humble materials, as is well known: the burlap and stone of the Arte Povera movement in Italy, or the simple, symbolically charged performances and actions of the Japanese Gutai group. The nearly eighty works in Return to Earth pinpoint the use of clay as one such humble artistic gesture, both born of the world’s woes and from a personal desire on the part of all of the artists represented here to participate in the ancient, guttural and deeply satisfying tradition of making with clay. 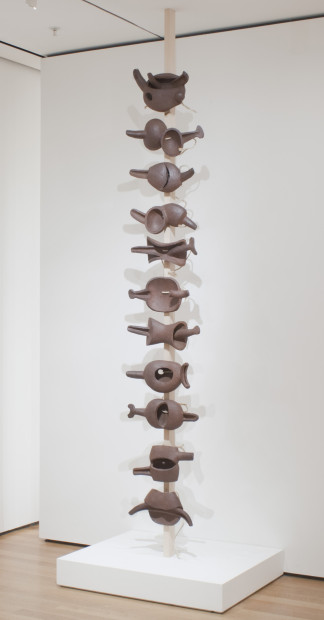 In the upstairs gallery, the whimsical, yet precise and articulate works by Japanese-American Isamu Noguchi anchor the room. His centerpiece work, Even the Centipede, is a series of brown stoneware objects that have been fastened to a vertical wooden pole like vertebrae forming a spine. The ceramic objects recall anything from ancient war masks, to sexual organs, to kitchen tools, and the hemp rope that fastens each part to the pole has been left to dangle a bit, pushing the idea that the sculpture has been made in urgency—a totem in some charged moment. The shadows cast by the tower play out like shadow puppets, creating a kind of theater around the piece that intensifies its ritualistic tone. 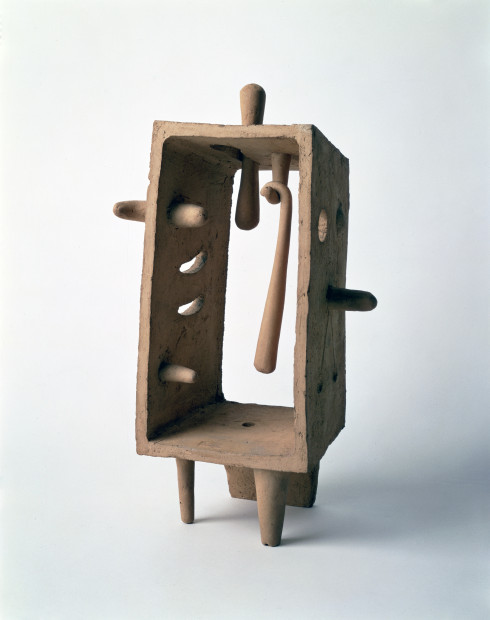 A number of Noguchi’s other works here are considerably smaller, though each carries the same whimsy and drama as Even the Centipede, and each creates its own kind of space. A few small, tan stoneware boxes are legged and hollow and look like a cross between architecture and animals. In one such box, called The Policeman, a small cane-like object dangles from the roof like a baton, waiting for use. It’s an animated piece as much as it is rigid, and it finds a corollary in one small work called Big Boy, in which the hands, feet and face of a child peak out from inside a traditional Japanese robe that is ostensibly hung for museum display. It’s a wonderful little piece that, like the hollow boxes, explores the interior space of a vessel; here in Big Boy, that exploration is playful and irreverent.

Nearby, the works by Pablo Picasso are equally cheeky. Head in the Shape of a Pumpkin is a jar shaped like a head with a lid for a hat and an enormous hole in the jar’s belly for a gaping mouth, which nulls the object’s functionality. The stunning piece Condor is a spouted vessel that hunches like the bird it’s named from; the neck of the spout is angled sideways, promising to pour out libations that will prey on you. But my favorite of Picasso’s pieces in the show were a series of small female figures that looked as if they’d been made quickly, perhaps as studies for larger works, or perhaps just as idle studio handwork, a sort of thinking exercise. They seem like ancient artifacts—goddesses or saints with long necks and exaggerated features. They’re beautiful and energetic despite their diminutive size.

Joan Miró’s work across the room is shown on large white plinths that cover most of the space nearest to the garden windows, which is fitting, since his work begins the transition in the exhibition into the more earthly and crude of the works on display. Miró’s contributions here include many of his sculptural and painterly surrealist images: body parts and celestial bodies, predominantly. But when made in ceramics—either painted on rough slabs of clay as images or shaped crudely into a form—these objects seem imbued with ritualistic powers, from an ancient time still overwhelmed by a fearful awe of nature and its forces. Often, Miró’s work here is architectural, not unlike Noguchi’s—archways like churches and shrines, or spires—but unlike Noguchi, Miró’s hand work on these pieces is evident in the fast and loose way these things are shaped, with pocked and uneven surfaces that feel like Antoni Gaudi’s buildings in miniature. 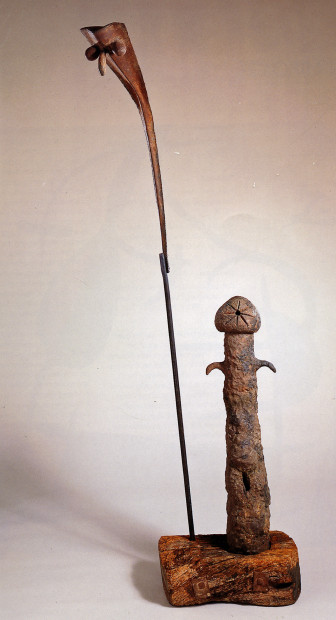 Many of the objects are assemblages made up of found materials, as in Man and Woman in which a metal rod fastened with a triangulated head (the man) and a earthenware figure, complete with orifice (the woman), have been inserted into a base of gnarled wood. Like all of his work here, this one is made out of a poetic understanding of our primal urges; I’ve never enjoyed Joan Miro’s work as much as I did in this medium.

The exhibition picks back up downstairs in the lower gallery, which is unfortunate, as it would have been wonderful to flow right into Fontana and Melotti’s work after Miro’s in the adjacent gallery were it not for the Nasher’s permanent collection being stationed there. However, the short trek downstairs has rich rewards. The visceral and often violent work of Lucio Fontana and Fausto Melotti carries the tensions of their era more than any of the other work in the show. Fist literally meets clay, as in the enormous balls of clay that have been excavated by Fontana’s hand, creating objects that feel like extracted wombs. Or the halved oval, black paint-smeared terracotta twins that have been slashed with a knife in their centers, just like his most famous paintings in the series Concetto Spaziale, of which these are a part. These hang on the wall in beautiful Plexiglas boxes, a precautionary step to ward off curious fingers that may want to find their way into the clay’s tempting wound.

Nearby, perhaps my favorite work in all of Return to Earth, is Fontana’s small, round-cornered, flat terracotta sheet called Spatial Concept, Nature. The majority of the sheet is painted a matte black, except for the center which is a wash of whites, yellow and blue. Within that painted space, Fontana has allowed his five fingers to dig into the surface of the clay in a pinching motion, gathering the material and paint into various small and messy mounds. It’s hard to say just why this piece resonates so powerfully, except that it’s a perfect blend of order and chaos, restraint and violence.

The work of Fausto Melotti walks that same balancing act in the back half of the gallery. Melotti’s work is perhaps the most illustrative out of the five ceramicists in the show, conveying the general upheaval of the post-war period. There are figures seen praying in temples as in Orpheus and The Echo; a stunning assemblage of bricks, ceramic kiln risers and brass accents called The Grand Canal, that reads like a city reconstructed from its own rubble; and the tormented and absolutely incredible Cat Dog—a hybrid of the two animals with a ring of nipples around its shoulders, suturing its top and lower halves. The anguished Cat Dog—as with Fontana’s slashed forms, Miro’s sexual assemblages, Picasso’s functionless vessels, and Noguchi’s wall-less boxes—captures these artists at the mid-century, all fulfilling an urge to make something beautiful by merging contrary things.

In all of the work in Return to Earth, forces are in contest with one another, resulting in a show that, like the title suggests, pulls us out of our contrived technological distractions and anchors us back to the molten lava-cored, rocky-surfaced, hot mess of this gorgeous, volatile, old old Earth.

Return to Earth: Ceramic Sculpture of Fontana, Melotti, Miró, Noguchi and Picasso, 1943-1963 is on view at the Nasher Sculpture Center through January 14, 2014.