Brian Keith Jones’ first solo exhibition, Meanwhile… Back in Dallas, opened to an excited crowd at Ro2 Art on the same day as the State Fair. You could almost smell the deep-fried butter, corn dogs and cotton candy inside the gallery—though that might have been attributed to the hot dog cart that was parked by the front door. The hot weather also added to the feeling of fair nostalgia. Growing up in Dallas, my memories of waiting impatiently for Fair Day are equated with sweating. It never fails: it’s either sweltering heat or pouring rain during the Fair (both, this year), and the heat inside the gallery paralleled Jones’ lyrical and sweaty illustrative style.

A much-publicized video was the show’s centerpiece—trailers were sent out to numerous publications in Dallas as promotion for the show—it shows a teetering self-portrait of Jones depicted as the State Fair of Texas’ mascot and martyr, Big Tex. The film, at 24 frames per second, was made from 50 individual paintings, (available for sale at the gallery), intercut with 28 black and white drawings (which were not for sale). The resulting clip bounced between scratchy sequences of sketches that resembled old black and white films and colored images of the paintings, illustrating Jones’ working process. 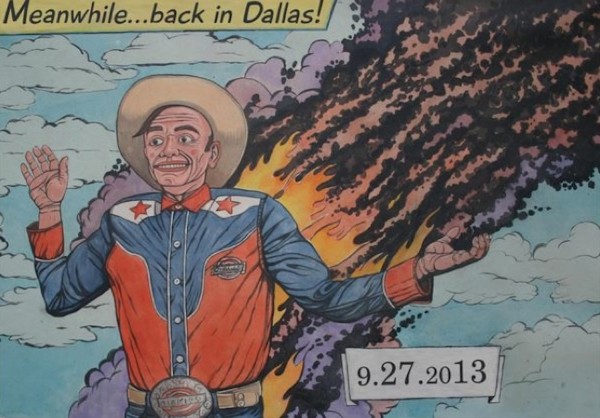 The show feeds off the local nostalgia of last year’s traumatic blaze, in which an electrical fire destroyed the iconic statue of Big Tex. It was pure, honest camp: bright colors, Big Tex (or Big Brian) made into a god figure, and a black-light room in the back of the gallery showcasing Jones’ love for neon colored fluorescent paint. The gallery was shot-gunned full of numbered canvases, with smaller, more affordable pieces mixed in with larger more polished paintings. Flames licked every single canvas. Each group shows a new angle of Big Brian, identified only by a curl of hair on his forehead. Above the bar, a large circus banner style painting encapsulated the camp of the show. The paintings are lovely, dexterous, and approachable. 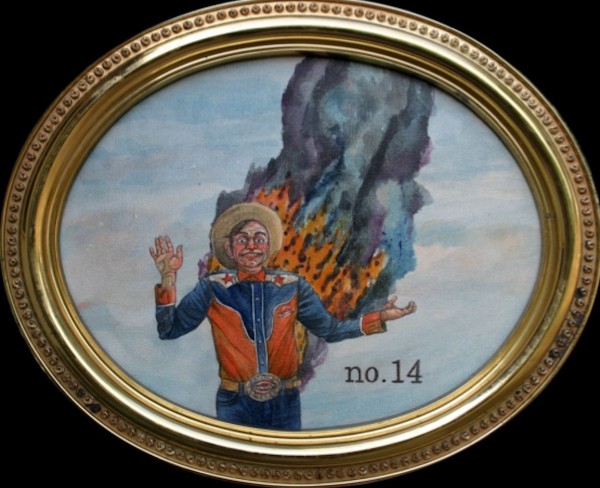 From the gilded, golden frame to the antiquated oval shape of the canvas, no. 14 evokes the nostalgia mentioned previously. It looks as if it could be hanging in your grandmother’s dining room, or in your Baroque-style salon (if, like Jones, you care to have one in your house).

The video, billed as the highlight of the show, was the low-point of the evening. Skilled, as far as technique, the piece was shown on a very new-looking monitor, but the video lacked the paintings’ anachronistic patina. The monitor needed to be more handcrafted to match the aesthetic of the show, framed in gilded wood, maybe, like some of the larger paintings.

Jones is one half of Dallas’ lauded Chuck and George, the collaborative effort of artists Brian K. Jones and Brian K. Scott. The Brians, as they are fondly known, craft wonderfully exaggerated caricatures, eloquently mixing sophistication and mockery. It’s always over-the-top, yet delicate—Rococo meets Baroque meets Pop. Their skillfully crafted cartoonish paintings and drawings exploit the imperfections of  people we encounter in our daily lives (or nightmares), and themselves, as they always use self-portraiture to craft their stories.  In their most recent show at Conduit Gallery, Tablescrappin’, the duo made their faces into ceramic masks that covered the walls of a small room that felt right out of Alice in Wonderland.

Jones hasn’t made anything profound in Meanwhile… Back in Dallas but he isn’t trying for profound. His work entertains, and evokes just enough folksiness to contextualize his grotesque characters. This childlike spirit translated into Jones’ individual work, and is what makes Meanwhile… stand out, as it brings into focus is Jones’ skill, work ethic and showmanship with timely humor.

Meanwhile… Back in Dallas will be included in the upcoming October 19 CADD bus tour, and the black and white drawings created for the video will be used in future book project: a coloring book, which Jones is planning to invite participants to collaborate in the making of another video.

Danielle Georgiou is a video performance artist in Dallas, TX. She is a freelance art and dance critic.