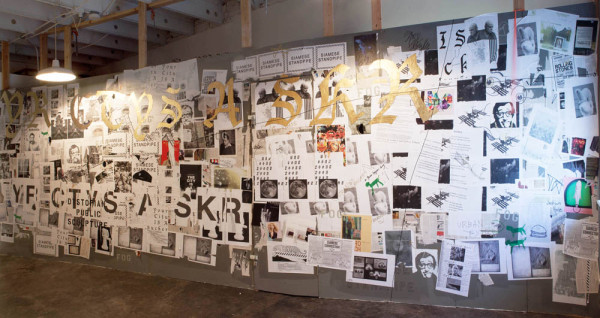 For the Art Foundation’s latest project, Asteroid Belt of Trash Blocking Transmissions of Love, at The Reading Room in Dallas, the artists transformed the gallery into a construction site. A temporary plywood wall, of the type that could be found in any major city spans the length of the gallery, becoming a site for advertising and graffiti. All that’s missing are the throngs of people rushing to and from work interspersed with blaring taxi horns and beeping garbage trucks. Creating something associated with urban detritus and isolating it in a silent gallery forces the viewer to pause and attempt to ascertain the work’s meaning.

The Art Foundation (artists Ryder Richards, Lucia Simek and Andrew Douglas Underwood) produced this site-specific installation for the Texas Biennial, inspired by Jonathan Lethem’s novel Chronic City. A major theme of the book is how technology has made us all performers, rather than passive consumers. We create culture by generating our own content. The three artists embraced this idea, by producing their own broadsides and graffiti based on characters and ideas in Chronic City.

Viewers who have not read the novel (including me) will miss the significance of the people and text featured on the wheat-pasted posters. What do images of Woody Allen (whom I abhor), Marlon Brando, polar bears and teeth layered with text listing 10 questions for Oprah’s book club and the words “Siamese Standpipe” have in common? I have no idea. If I were to encounter the same overwhelming and confusing hodgepodge of images, symbols and text outside in the “real world,” I would not spend much time trying to make sense of it.

Because it is in the gallery, I try to decode the hidden meaning. This raises an important question. Is it imperative for viewers to decipher the artwork’s subtext? The work sets up an insider/outsider relationship between the creators and viewers “in the know,” and the rest of us. Knowing the Art Foundation’s other work and interests in creating a dialogue about the Dallas arts community, this work strikes me as a metaphor for the ongoing Dallas art debate between institutions and artists about lack of access. 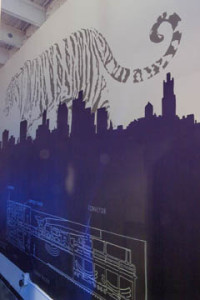 In addition to the broadsides’ content, the installation’s structure further emphasizes the issue of access. In the temporary wall, the artists cut 5 peepholes, which reveal a glimpse into another world. A large silkscreened image of a Siamese tiger walks on the silhouette of a city skyline. Below the skyline is some sort of schematic or floor plan. Doors in the temporary wall are padlocked, thus preventing viewers from gaining entry into this magical, alternative world.

One peephole is connected to a surveillance camera. A monitor connected to the camera installed by the gallery’s front desk projects a wide eye blinking with confusion. Big Brother (or at least the gallery director) watches us as we partake in peeping tom voyeurism. Usually the whole surveillance thing pisses me off. I still think about silly things like infringement on my privacy. However I am ecstatic that the gallery director gave me a digital photograph of my voyeuristic eye. I always wanted to be the omniscient critic. My all-seeing eye is now recorded for posterity. 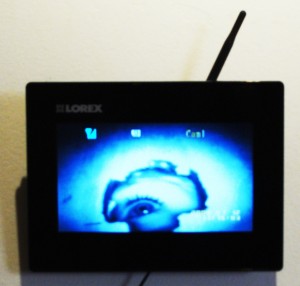 Lest I live up to my reputation as an art lover, rather than an art critic, I do have one disappointment with the work—the chaldron. In Chronic City, the chaldron is a magical entity that the characters want to find and have sex with. The Art Foundation’s chaldron is a glowing vase. I just can’t imagine having sex with a vase, no matter how seductive. I imagined the chaldron as a chimera, taking a different form based on each person’s fantasy. Perhaps glowing mist would have been less literal.

It’s a small point in what is otherwise thoughtful and masterfully constructed work. It defies the trendy, unmonumental slacker aesthetic, which I happen to detest. Despite the fact that the average viewer isn’t going to get the references or the subtle reference to the ongoing Dallas art debate, the work is visually compelling.  It made me want to read the book and kept me thinking about the installation long after my gallery visit.

Complicity with current culture is another theme in Lethem’s novel. The Art Foundation installation could be interpreted as either encouraging complicity by preventing access or encouraging resistance to complicity by challenging us to decode the pieces’ meanings. I think it does both. My one regret is that I was too complicit. I played by the art rules. I wish I would have taken a black Sharpie marker and defaced Woody Allen or broken the padlock and stolen the chaldron.

Asteroid Belt of Trash Blocking Transmissions of Love will be on view by appointment at The Reading Room in Dallas through November 2. 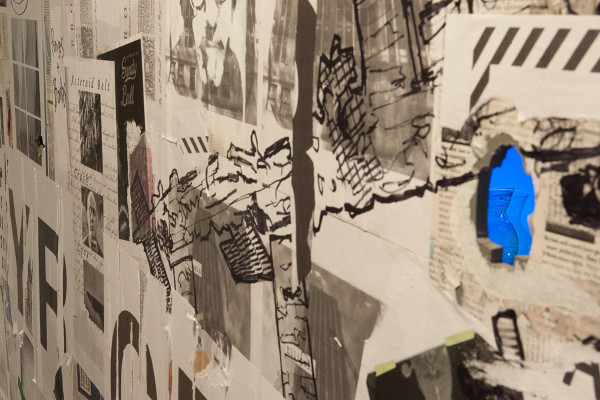 I am so coming back with my Sharpie marker. Woody Allen, be prepared for defacement.

Thank you to the artists and Colette; and thanks for the photos – all from Karen Weiner, or just the one?

Carolyn, A few of the images were from The Art Foundation. – Colette, I’ll bring the Woody Allen stencil to repair the graffiti.