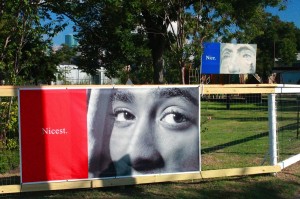 A billboard placed in Houston’s Dupree Park in the Third Ward has provoked a counter-billboard. The original billboard promotes the Menil Collection’s current exhibition Nice. Luc Tuymans, with one of Tuymans’ portraits and the word “NICE.” A large sign has appeared nearby, which mimics the advertisement’s layout; it presents a close-up picture of rapper/poet Tupac Shakur and the word “NICEST.”

In a press release of sorts emailed to Glasstire, artist Phillip Alan Pyle II questions the placement: ”The issue before us is why did the Menil choose Dupree Park to advertise this exhibition? This is not to say that neighbors here have no interest in art, but the ad is vague, and does little to educate the community on who or what the ad is about.”

Pyle’s nearby Beauty Box (created with fellow artist Robert Hodge) has received much attention for its utility, relevance, and respect for the neighborhood and its history. While Pyle’s questioning of the billboard’s relevancy to the neighborhood’s residents may well be valid, he also comments on Tuymans’ Belgian nationality: “Didn’t the Belgians under King Leopold kill like 10 million Africans in the late nineteenth century?”

Pyle also adds, “At the moment there has been no one to claim responsibility for the “NICEST” billboard, but rumors are that the art collective Everything Records may have been involved.” Pyle is listed as president and CEO of Everything Records.

Is Dupree Park the only Houston neighborhood in which the Menil advertises its Tuymans show? If not, wouldn’t it be discrimination of the worst sort for it to effectively conclude that area residents were not capable of being engaged by the advertising?
As to Tuymans being Belgian and one of Belgian’s previous kings having been responsible for countless deaths in the Congo: it’s unfair to boycott Tuymans for his nationality, particularly when his work is critical of that colonialism.

(In response to J. Tyson) I think ol Phil didn’t mean that area residents were incapable of engagement with the ad, as he stated “this is not to say that neighbors here have no interest in art”. But as anyone of modern culture knows, Tuyman is hardly a relatable icon of art in not just this community, but of any collective area thats not specifically artfully inclined. He could say the same thing about the ad being placed in Sugarland or Katy, the criticism is directed towards the Menil’s campaign strategy of being to vague and uninformative. Tupac Shakur is more likely to be recognized as a figure of artistic influence more so than Tuyman, primarily in a generational sense. I believe Phil is also challenging the general “institutions of art” by saying who are they or anyone to set the standards of art; which goes into a deeper sense of questioning institutionalized art itself. Does not art come from the people? Better yet does it not come from the most oppressed and socially trampled of people?

There are a few ads like this around the city. In fact there is one on the side of the CAMH. It is odd however that the Menil is engaging in an advertising campaign of this sort as it has never done something like this is my recollection. But then again the Menil hasn’t played host to very many living artists in the past decade so it might be that Tuymans is behind this marketing campaign as it is very uncharacteristic of the Menil to plaster billboards all around the city. Mr. Pyle who seems not have done much research on Tuymans fails to say anything about the artist’s staunch opposition to colonialism and racism or even recognize the fact that that the Menil has always been strong advocates of civil rights and supported the African American community in Houston – one need only remember some of its past exhibitions and the support its founders John and Dominique gave to our community in the 60s and 70s. It would seem, by the article, that Mr. Pyle (or Ms. Newton) is making the worst sort of subtle racial provocation where there is none to be made.

Most people seeing this billboard–whether they’re in the 3rd Ward, River Oaks, Acres Homes or Sugarland–won’t recognize the subject matter, so that’s irrelevant. This is either part of the exhibition (meaning it’s the art), or it’s the kind of vaguey marketing that aspires to be art. Which is fine: the Menil doesn’t have to put their name and some dates on a billboard to explicitly promote a show.

What makes the billboard a failure is not the neighborhood it’s placed in, or the fact that only a member of the cognoscenti will understand the reference, but rather that it doesn’t resonate, regardless of whether you’re in on the joke. The very best art — and for that matter the very best marketing — resonate with anybody, anywhere. Neither of these signs achieves that (admittedly) very high bar.

All of which is to nit-pick a sideshow to what, by all accounts, is an extremely good exhibit at the Menil.

The Menil put a billboard in Sugar Land?? (Two words, by the way.) God forbid… banish the thought! I’d be curious how many from SL are even aware of the Menil. But then, who can really blame them?

Let me clarify that my last question is by no means a comment on the Menil’s stature as an institution or the importance of its exhibitions– but rather, an expression of frustration that our suburban communities being marginalized as the uncultured. (This attitude reads loud and clear in these comments.) If we’re talking about discrimination in this context, look no further.

*expression of frustration [about] our suburban communities being marginalized

People holding a negative opinion about a place or the people there isn’t “discrimination.”

Tom Delay…they chose and brought him to the dance.

I’m an artist and co-founder of Everything Records! #Nicest

The mere fact that this conversation about the billboard exist means its relevant and part of an effective marketing strategy.

I am not sure why the comments are leaning away from the Third Ward Artist’s installation in relationship to the character of the Menil billboard.

Back a few years ago now when many of the young Third Ward artists were kids of grade school we incorporated in a photo project. Walking around the RowHouse neighborhood they documented their neighborhood with disposable cameras, The most common images were of each other with stop signs, no trespassing signs and gangster rap billboards.

The Tupak reference is too good and bad for someone of the Third Ward to not pass up. Look at the correlations in the press release image.

It’s just simply good. Funny and smart, totally trumping the attempt of the Tuymans billboard and cleverly pushing it off the stage without even touching it. Why do that? Because that sign inserted itself and fell flat, that’s all. My take is, this isn’t about Tupac VS. Tuymans, or the Menil VS. Third Ward, or Belgians VS. Africans (although if it starts people exploring those relationships, great.) It’s just that if you put something up in an active creative community–especially a vague ad with a portrait and a boast–then know that a quick flip and obliteration is totally fair game. “Nicest” jumps in and changes the conversation. It reclaims the space, simply, instantly, effectively. Boom. Well played.

Having not given the matter any thought for a few days, I second this opinion and retract my previous (somewhat dippy) comment. Menil billboard doesn’t work for the aforementioned reasons (including the ones I gave), but the response billboard is funny.

It’s absurd, however, to hold Tuymans responsible for Belgian human rights violations of the 19th century, unless Pyle is prepared to be saddled with the My Lai massacre — after all, those were Americans, too.

My feeling is that institutional critique through a hip-hop lense as practiced by Hennnessy Youngman is so powerful because it is so informed. I think the success of the the critique in this situation really hinges on the information the sign-maker is working from and what the criticism is.

First of of all, Tuymans had banners – not billboards placed around the city. A common practice for all European museum shows – you see it less often in the US.

Second, he has an amazing body of work dealing with Belgium’s atrocities in the Congo. I spent a lot of time with his retrospective at the SFMOMA, and this work was by far the most powerful.

Thirdly, he has a long-term collaborative project with Kerry James Marshall.

The point being, Tuyman’s IS engaged with issue of race and the unjust actions of his homeland.

The placing of the banners is awkward in a stereotypical European way – you could make fun of that, but then stereotyping isn’t super PC.
Where Tuyman’s misfires in my opinion is that HE is uninformed about just how active the African American art community is in Houston. I think his “outreach” could have been more engaged and subtle – lending a painting to Row houses for example, or at least using “Secretary of State” for the banner.

When Hennessy masterfully compares Beuys to Jay-Z it works because is informed about both bodies of work – it is funny, but dead serious at the same time. For this to move beyond an un-informed piece that is derivative of “Art Thoughtz”, it needs to consider at least the basics of Tuyman’s work.

One issue with artists “taking on” another artist (Landeros, “Dandy Warhol”, etc.) is then your body of work has to contend with that artists body of work.
Nobody has to Like Tuymans, but he has a serious, well-thought out body of work.

Because of the rain the Menil-Luc Truymans talk will take place at the El Dorado Ballroom. 2310 Elgin