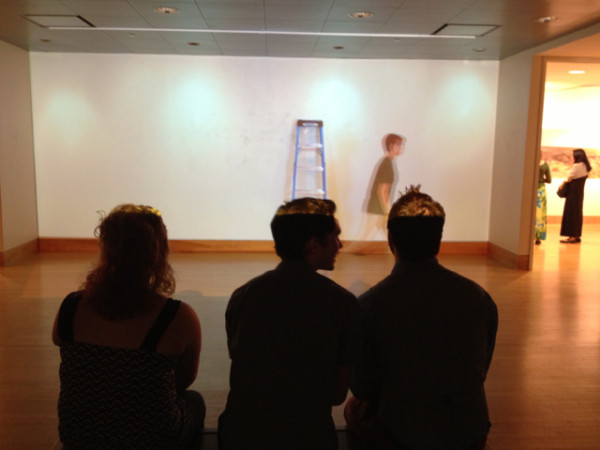 Walking into Echo, a video installation by artist Linda Post, the initial impression might be that the work is not yet complete. At first, the main gallery wall, though brightly lit, seems to have no images. A green four-foot tall carpenter’s level leans against the empty wall. After a few moments, a gallery worker walks in, carefully picks up the level and continues out of the gallery. The worker and the level are both life-sized projected video images. The adjacent walls hold similar projections, but seen as a whole, they show something more.

The main gallery wall presents a continually shifting tableau. Scenes in which workers interact in the gallery fade into images recorded outside of the gallery space: an out-of focus dust-covered window, a close up of palm fronds swaying in the breeze, glimpses into an apartment, a swimming pool. The silhouettes of viewers in the gallery occasionally block the projector’s beam and become part of the scene. 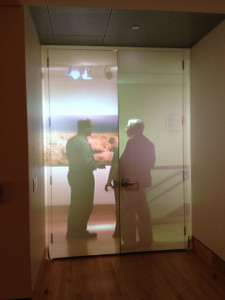 Two other projections in the gallery similarly shift, but are not all pre-recorded. Video cameras placed within the gallery look out through the half-closed doors that allow visitors into the installation. The live images recorded by these cameras are projected onto a set of real double doors within the gallery. Because of this visual play, figures in the hall just outside—on opposite sides of a long hall—appear face-to-face within the exhibition. They seem to interact with each other within the gallery when, in fact, they are outside and quite far apart. On another wall, the gallery’s elevator door silently opens and closes revealing images of more uncertain origin. It’s hard to say if they are live or prerecorded. Impossible juxtapositions of space and time coexist easily in Post’s installation.

The recorded projections on the main wall continually cut and fade into one another, returning repeatedly to the original workers going about their business in the same space that we, as viewers, occupy. The live video feeds and the shared visual space inextricably intertwine the seer and that which is seen. As the philosopher Maurice Merleau-Ponty writes, “It is as though our vision were formed in the heart of the visible, or as though there were between it and us an intimacy as close as between the sea and the strand.”1

As an understanding of the overlapping and multiple vantage points takes hold, it becomes tantalizingly difficult for the viewer to stand outside of Post’s artwork. Again, as Merleau-Ponty says, “There is double and crossed sublation of the visible in the tangible and the tangible in the visible; the two maps are complete and yet they do not merge into one.” The work, in other words, invites physical engagement with it. Several younger viewers at the show’s opening felt compelled to run down the outside hall eagerly seeking the impossible simultaneity of seeing and being seen in the video projections. 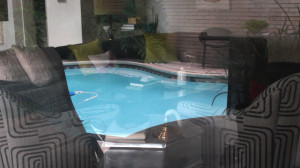 As the images shift from the layered shimmering reflections of a swimming pool to the projected workers again carrying a ladder through the gallery the viewer co-inhabits, it becomes evident that the installation was not complete before the viewer walked into the gallery. It is only upon entering the space as an active viewer that the work becomes art.

Linda Post is an assistant professor of art at Stephen F. Austin State University. Her video installation, Echo, is on view through October 19 in the Reavley Gallery at the Cole Art Center, 329 E. Main Street in Nacogdoches, Texas.