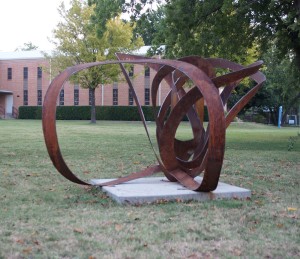 Now in its fourth year, Art on Henderson, an annual juried sculpture competition to select and place works by Texas artists along Henderson Avenue and adjoining streets, has announced the top three winners for the 2013 competition. First-place winner Laura Abrams has received $3500 for her steel sculpture Petal Play. The second place prize of $2500 has been awarded to Pascale Pryor for her colored Plexiglas and painted steel installation Migration I.  Scott Shubin has received $1500 as the third-place winner for his work of coated steel tubes entitled Cobra.

The competition began in 2010 by Dallas sculptor/educator Scott Trent and is a collaborative effort between the art community and Henderson Avenue businesses. To this end, the seven finalists received $650 toward expenses for the installation of their pieces, and cash prizes were awarded to the top three winners, as selected by the panel of jurors, for a total of over $12,000 in award money.

Another New Art Walk. This Time in Keller,...