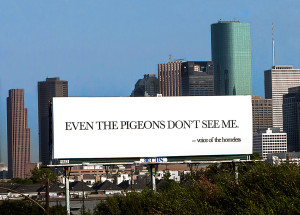 A big billboard went up the other day in Houston along I-45 South, which reads “EVEN THE PIGEONS DON’T SEE ME.” It may catch a few drivers off guard, but it’s meant to raise awareness about homelessness. The billboard is a project by artist Jessica Crute in conjunction with a group show at Deborah Colton Gallery called Collective Identity.

Crute, president and founder of a young non-profit organization Voice of the Homeless, says she used her own father’s experience with homelessness as a catalyst and was inspired by Yoko Ono’s (slightly more uplifting) “IMAGINE PEACE” billboard. In her work, Crute has captured stories and handwritten texts from homeless men and women she has encountered. “Even the pigeons don’t see me,” wrote one young woman during an exchange and, from these words, an artist’s sense of activism was born.

Vat vould it veel like to be unt homeless man unt to look up at der billboard und zink “vow, I could have bought zo much alcohol for ze cost of putting up zat advertizement.”