There is a well-accepted psychological phenomenon called the “mere exposure effect,” sometimes called the “familiarity principle,” which suggests that repeated exposure to a stimulus enhances people’s attitudes towards it. University of Tennessee, Knoxville philosophy lecturer Margaret Moore decided to see if the theory holds up when it comes to bad art. Moore worked with lead author Aaron Meskin and Matthew Kieran at the University of Leeds and Mark Phelan at Lawrence University to conduct a study and published the results in the British Journal of Aesthetics, titled “Mere Exposure to Bad Art.” 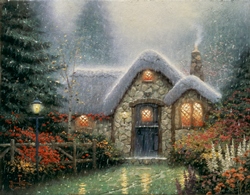 The Woodsman’s Thatch, by Thomas Kinkade

The researchers exposed 57 students to repeated viewings of paintings from two artists, John Everett Millais and Thomas Kinkade. Kinkade, the American “painter of light” was chosen to represent “bad art,” and John Everett Millais, a 19th-century painter whose subject matter and palette was similar to Kinkade’s was chosen to represent “good art.” While repeated exposure to the Millais paintings did not significantly change the students’ assessment of their quality, they found that the more the students viewed the Kinkade works, the less they liked them.

Lead author Meskin (from the University of Leeds, yes, but he used to teach at Texas Tech!) compares the process drinking a pint of ale:

“Just as the first sip of a pint of poorly made real ale might not reveal all that is wrong with it, after a few drinks one would know how unbalanced and undrinkable it really is. So, initial exposure to the Kinkades might not have enabled participants to see how garish the colors are and how hackneyed the imagery is.”

But the researchers don’t extend the analogy to drinking 4 or 5 pints of ale (or mugs of beer at Texas Tech). In other words, if you look at a really excessive amount of art, you may reach the point where you can’t help but to want to look at more of it, no matter how bad it is and how painful tomorrow’s headache may be.

This and That: Juan Soriano and John Everett...

I am really happy to know that you are performing this necessary research. This phenomenon is more extended and dangerous than any can imagine. If you read the book written by Gregory Sholette (“Dark Matter. Art and Politics in the Age of Enterprise Culture”. Pluto Press, London, Palgrave Macmillan, New York, 2011), you will see the consequence of this toxic phenomenon. I would like collaborating with you. Images of my paintings can be downloaded in the websites ArtsCad, and The Art Room, and I would like hearing from your results.