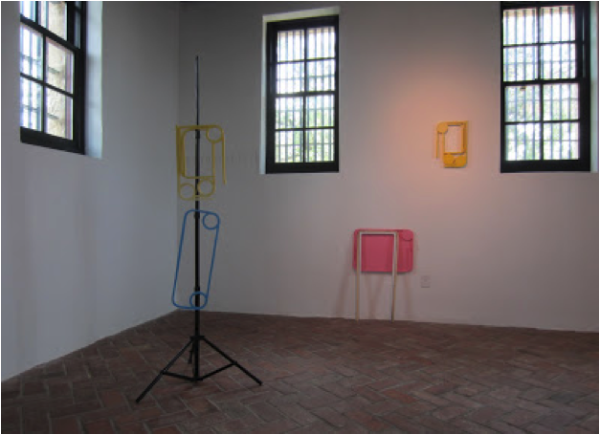 Some might think that art exhibitions are an escape from the monotony of the spaces where we imprison our minds during our everyday lives, but in his new “Cell Series” exhibition, titled TV Dinner Commercial Break, at the Old Jail Art Center, Brad Tucker may beg to differ. Tucker offers a collection of wood and fabric sculptural investigations reminiscent of objects associated with television equipment and TV dinner implements.

The show is a site-specific installation in in two adjacent, nearly identical cells in the Old Jail. Eight of the twelve works have a “counterpart” in the other cell that is almost, but not quite identical in size and shape or color. The placement of the works leads the visitor in an uncanny figure eight dance back-and-forth between the cells, to examine every minor variation and conjecture on the differences between pieces. Looper and Repool are great examples: a mirrored pair with no discernible differences. Even the titles are palindromes.

Why create this situation? It seems like a commentary on the pre-packaged television reality that has invaded contemporary culture, where no matter what location or what television one views, it’s the same TV dinner and program. The color of the dinner tray that you eat off makes no difference. The show tackles such large ideas with the sensibility of a comedic movie that, while funny and enjoyable, can be read on a variety of different levels.

Tucker’s style has matured; he’s toned down some of the whimsical qualities in his earlier work. Works in the show like Broadbands and Dim Widths expertly play with balance and tension. Although not as heavy and precarious as sheets of metal, a there’s a Richard Serra sensibility in the way two rectangular wooden forms rest precariously on knobs that would be used to adjust the height of what appears to be a handmade microphone stand. Gravity alone holds them in position.

While in some sculptures it’s easier to see their original reference than others, the formal elements are all well-composed. An almost academic balancing of the use of line, plane and volume saturates the show, furthering Tucker’s commentary on the culture of television. Antennas, placed tightly in a corner where its two arms touch the walls, is a highly successful: a masterful flow of small linear elements that move like a wave in a beautiful play of axial movements, while still recalling the familiar old solid grey antenna.

The exhibition is full of works in which the process of their creation adds a very enjoyable evidence of craft. Receiver, for example, has several chips and scuffs in its painted surfaces that reveal the wood underneath. Additionally, even though it is a wall-mounted 3D object, the sides are naked wood. This adds a great depth to the work, serving as a foil to the mass-produced nature of how most of the objects he is referencing are made.

Brad Tucker is an Austin artist, teacher and skateboarder. Originally from California, Tucker received a BFA in painting from the University of North Texas, and an MFA in sculpture from the Milton Avery Graduate School of Arts at Bard College.