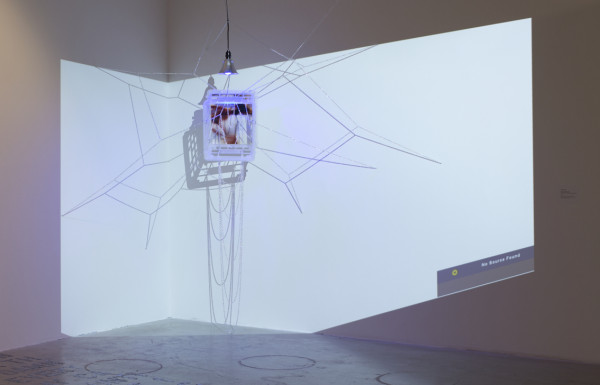 The Exploring Latino Identities series examines issues in Latino/Latin American contemporary art through interviews with artists, art historians, and others. In today’s installment, Chicago-based multimedia artist, writer, and professor Ivan LOZANO talks about where technology meets folklore and growin’ up gay 3.0 on the internets.

Ivan LOZANO: Art is suffering from an identity crisis; its boundaries have become porous after decades of annexing so many disciplines into itself. This gives us an amazing opportunity to redefine the field and re-draw its boundaries (or not), and to cut out what we don’t agree with. My background is in experimental film and video and, when I was in that world, the avant-garde was not just something that existed—it was almost an artist’s moral responsibility to be a part of it. I don’t agree with most things, and I’m not willing to take things as they are. I hope I can make people realize that our “moment” has a narrative, a context and a history to it—be it language, images, color choices, “gay culture,” technology, media or any other area of “knowledge.”

LMF: How does your work pioneer form and content?

IL: Artists have a responsibility to make sense of the disparity between technology and our understanding of the impact it has on culture. I’m just approaching it from the perspective of a middle class, queer, cisgendered male, Mexican American. I am part of the first generation that is native to the Internet but also remembers (although fuzzily) what life was like before. We’re living in a time when the technology we’ve created is changing so quickly it’s impossible to keep up with its effects. Almost every moment in our lives is governed by computer code. As I’m typing this answer on my keyboard, code that is too complex for any one human to understand translates my keystrokes into data displayed as pixels that show up on my laptop screen. I will then send this to you via email. By the time someone reads this on Glasstire, a ridiculous amount of complicated processes of encoding and decoding between computer languages has happened. It’s the same situation with images. Most of them are now, at some point or another, code. As we involve computers more and more in image creation, what we experience is not an indexical trace of anything, but a reification of an utterance in a mathematical language that we cannot understand. I can type a series of commands on my keyboard and I can manifest images, videos, sounds. These processes are occult, they’re magic.

LMF: Where does your interest in folk religions come from?

IL: From my love of science fiction and the occult. It was clear to me that, as Arthur C. Clarke wrote, “any sufficiently advanced technology is indistinguishable from magic.” I also credit Cauleen Smith, my undergrad professor, for exposing me to AfroSurrealism. I wondered whether the folk traditions I remembered from my upbringing in Mexico could offer solutions to problems in technology. I was fascinated by the idea of Santeria rituals as computer code, or Orishas that could travel through cyberspace as ways to combat the dehumanizing side effects of digital revolutions. Folk religious traditions are a political tool and an “antidote” to the alienation that comes from living under Neoliberalism and Globalization.

LMF: How does magic play a part in your practice?

IL: It seems to me that for any artist, a certain degree of magical thinking is essential to cultivate. Magical thinking is the belief that your thoughts can have a physical effect on the world just by thinking them. It’s been shown that things like prayer, rituals, meditation or superstition can have meaningful psychological and physical effects on its practitioners. My particular brand of magical thinking considers each piece a spell, an incantation. Most of my work appropriates pornographic images or videos found online. Considering an image file pornographic means that something in the code of the image makes it so. If I convert the image-as-code into a print and cut it up or digitally manipulate it with software, then parts of that pornographic code are in my new file and its final physical iteration. What I try to achieve in my work is—more often than not without resorting to representations of sex or sexual organs—to actualize that eroticism by using abstracted bodies and cutting up code. To put it in magick terms, “as above, so below” (pun intended). 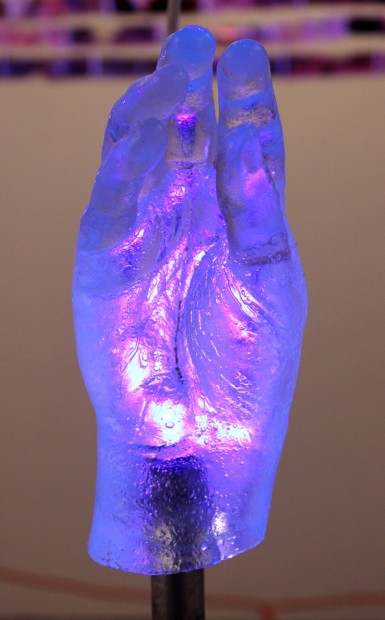 By deploying what I’ve learned by studying non-Western native folk religious traditions, I pay tribute to the image-as-code and rescue it from being a symptom of an economic, technological and ideological system by giving it new possibilities. I’m doing what the native people of Mexico, the Caribbean, Africa and South America did with Catholic imagery to the image-as-code: hijack it and redefine it to fit my spiritual needs.

LMF: Let’s talk about your online presence. CTRL+W33D  (Caution: explicit content!) is really unusual and funny for an art project.

IL: The Internet’s endless ocean of signs, images, texts and ephemera easily disconnects material from its context. While there is a positive democratizing aspect to this, the other side of the coin is that we don’t know what things “mean” anymore. This is where most of the humor comes in for CTRL+W33D. Camp is our main tool. It comes from recognizing the slippages in the meaning and context of the images we appropriate. Camp is a “heroic” gesture that rescues the digital image from the purgatory of kitsch, of “poor taste.” As Pierre Bourdieu explained, taste has to do with economic resources and cultural capital. “Taste” is a hegemonical tool, a top-down consensus. The “heroism” of Camp humor comes from a refusal to accept kitsch and from an active re-inscribing of context and meaning. As crass as CTRL+W33D might sometimes be, it’s a moral crassness. 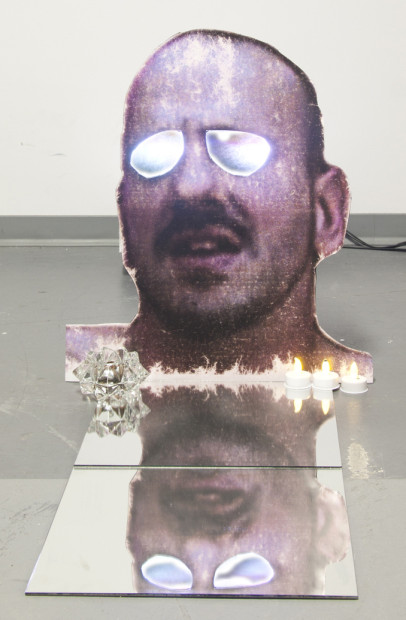 IL: I started IMAGE FILE PRESS after seeing how Hurricane Sandy destroyed the archives at Printed Matter. It seemed weird that, in this day and age, these things wouldn’t be digital. I decided that I could start creating an archive of art publications that perhaps in a couple of decades would be quite impressive, like Printed Matter’s. I also was thinking about alternative methods for the distribution of art. On the train home, I realized that everyone had their faces buried in some kind of mobile device. Finally, I wanted to create new networks for myself and other artists I felt I had things in common with. I think A LOT about the way that digital images work in culture, how they are understood maybe differently than images before the Internet, and what that “means.” I know I don’t have the answer to that and I know it’s a huge question, so I decided that I would enlist other people, ask other artists to help me figure it out. Each month, I ask a different artist to pick an image that sticks in their head and make seven “responses” to it. So far I’ve published four and have another one ready to go next month.

I see it as a deeply political move, asking artists to create images to counteract or respond to the images that are already in circulation. Cultural artifacts, especially images, spread and perpetuate culture in (often insidious) ways, and I think that as artists, we have a chance to sabotage/counteract/derail/reframe/talk back to images/culture. 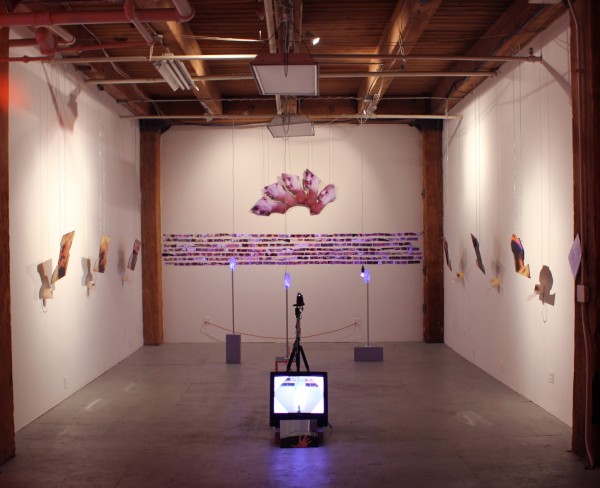 LMF: Along with visual modes, you’ve developed a strong relationship with the written word.

IL: Words are very important for me. I love exploring their etymology, seeing how their meaning or usage has changed over time. As an artist, I’ve gotten so much inspiration from seeing the path a word takes through time. It’s the same with music and images. Appropriating an image or a musical style from a different time period and seeing it/hearing it from a different angle can be a barometer for our culture. It can show some of the biases we have, some of the traps we fall into or assumptions we make about what’s “right” and what isn’t.

LMF: Last question: does the globalizing power of the internet share something with the Conquest of the New World?

So this guy insists on having his last name in all caps?

When is the “Exploring White Identities” show?

Oh whoops, sorry, that would be WAAAAAYCISS

Feel free to make one, no one is stopping you. You can’t begrudge someone for doing a show exploring their ethnic identity and putting in the time and effort to actually making it happen if you won’t put in the same for your own rather than just mouthing off. THAT’S what’s racist, not that there isn’t a White Identity show.

As if Latino artists don’t have the right to do their show their way just because you don’t have the drive to make your own. And if they are constantly labeled by their ethnicity, as a Latino Artist or Black Artist or Asian Artist, why would it be surprising that they would explore that identity in a show when they don’t have the same privilege that whites enjoy of simply being “artist” with no designation of race before it? If I were being made to feel like the “other” in the room I would certainly have an interest in exploring what that really meant for me. The work is not negated just because it doesn’t cater to your majority.

If you really have a problem with it, nut up or shut up. Go make your show. No one is saying you’re not allowed to explore your white identity. Whether or not anyone gives a shit will completely depend on your ability to create a meaningful show worth anyone’s time.

No, not racist at all just absolutely redundant. You not realizing this is maybe STOOOOPID.

To clarify: this is not a show, it is a series of interviews.

A short response: The series is called “Exploring Latino Identities” because, as the various interviewees have illustrated, issues of Latin American and Latino (artistic/art historical) identity encompass a complex spectrum of racial, cultural, socioeconomic, etc. experiences and concerns. Each interview is ‘exploring’, not defining. Perhaps there is a common thread, perhaps not. “Latino/Latin American” categories have been problematic for a very long time, which is also a big part of the project. I have also interviewed people who do not racially identify as Latino or Latin American but study the field (if racial identity, which is a tricky subject, is the main concern here). Either way, I hope the interviews can provide a platform for the possibility of community, context, and debate.

Ideas expressed by LOZANO are somewhat grandiose and not without precedent (Guillermo Gómez-Peña comes to mind). LOZANO and Gómez-Peña have a certain flair, but I don’t know that the rhetoric has a a broader context. I’m always weary of artists (or people, for that matter) that over-generalize and paint broad and/or over-complicated socio-political or cultural strokes with their work and words.

As a human being/artist/software developer, it’s not up to me to unilaterally declare that art is suffering from an “identity crisis” or proclaim what the responsibilities of other artists are… and writing and understanding the code behind digital images is not “occult” or “magic.” They’re binary (made up of 1s and 0s). Developing software is just like any other discipline. Takes work to understand and execute, but once you’ve got the hang of it, it’s like riding a bike… Not really as fantastical or magically real as LOZANO claims.

On another note, there is not such thing as a “Latino identity.”