Lakes Were Rivers: Contemporary Photographic Practice and the Archive

Perhaps what is most remarkable about the Ransom Center’s collection is just how unremarkable some of it is. Odds and ends, loose notes, a yellowed plastic paper weight all hold a spot in the same archive that is home to a Gutenberg bible and the world’s first photograph. The current show in the Harry Ransom Center’s gallery, Contemporary Photographic Practice and the Archive, is a collaboration between the center and the Austin-based photography collective Lakes Were Rivers. The prosaic title of the show hardly betrays the intricate, subtle, and sometimes bold associative leaps the artists draw between objects and other objects in the archive, objects in relation to the archive, and the archive in relation to their own work.

Work from each artist is presented along with selections from the Ransom Center’s vast collection accompanied by a few paragraphs of wall text from the artist describing his or her process and intent. Moving through the show, two general themes emerge, one being the theater of the photographic image, and the other the place of photography in science and its tenuous position as both an indexical image and device for creative manipulation. 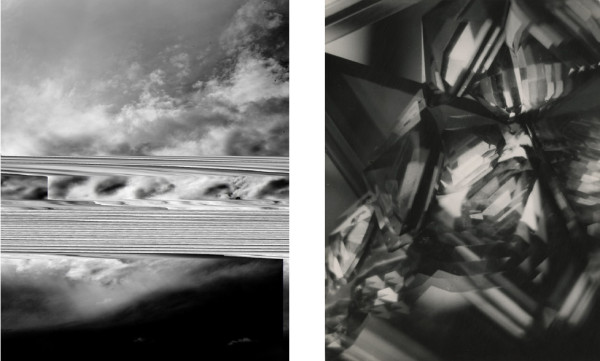 Barry Stone presents a particularly elegant and cogent history of images that capture scientific phenomena with a type of visual poetry that dazzles as well as informs. These are the type of images that change our understanding of the natural world. Hubert Schardin’s 1950 photograph of a bullet passing through a candle flame in which the photographer captured the undulating sound waves left in the path of the bullet, making the invisible visible. Next is an early abstract photograph by Alvin Langdon Coburn, Vortograph of 1917. This would have been a curious and disorienting image to most viewers, as photography until that point had been almost exclusively representational. Conjuring qualities of spirit photography, Stone positions photography as a medium that reveals information beyond what is visible to the naked eye. This is reflected in Stone’s own work, a series in which he takes the binary file of a digital photograph and alters the code to introduce digital glitches into the image. A black-and-white photograph of trees appears normal except in the top quarter of the frame where the trunks suddenly skew far to the left, appearing something like the picture distortion on an old cathode ray television with bad reception.

Jessica Mallios explores the many layers of representation in photography, art and the archive. On the wall adjacent the entrance to the exhibition she presents two images from the archive of theatrical set-designs, made in miniature. The images are uncanny, photographed with no concrete referent to indicate scale and floating in space. Facing these images are four holograms created by Mallios from images she took of the Ransom center’s empty display cases. These 3-D images are abstract, appearing as a disorienting group of angles and planes. Her work with the archives of 19th century theatrical designer Norman Bel Geddes brought her to work with cameo silhouettes. This sparked in her an interest in the visual and perceptual possibilities of positive and negative space. Her video Rhombus came out of this exploration. Rhombus gives a patient viewer the chance to experience a gently shifting afterimage, caused by the perceptual lag time we experience as an image disappears and reappears in our visual field.

Each Lakes Were Rivers artist takes a different path around the Ransom Center’s archives. Jason Reed discovered the strange synchronicity between his work and the work of early 20th century photographer W.D. Smithers. Reed’s pairings of their photographs together is simple, direct and effective. Leigh Brodie’s broader questioning of objectivity in landscape photography pulls from many historical referents, and fittingly her own work uses a process that aggregates many images to create compound landscapes that echo this question of what objectivity is.

The Ransom Center houses over 40 million manuscripts, rare books and works of art. Given the nearly incomprehensible scope of the collection, it is not surprising that Contemporary Photographic Practice and the Archive is a show that is densely packed. Digging into the archive, guided by the meandering, though adept lenses of the Lakes Were Rivers artists is time well spent.

So wish I could see this show. And excellent review!