James Saldivar: Spaces in Between at Silkwörm Gallery and Studio 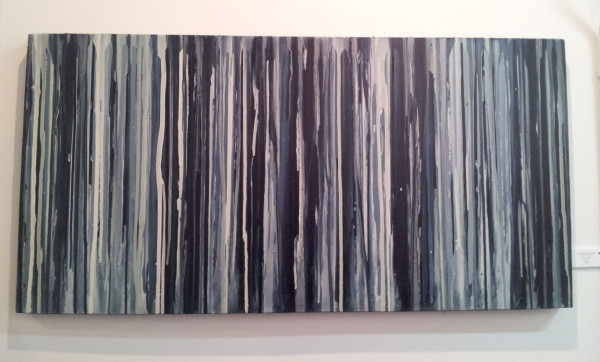 No one-liner abstractions, Saldivar’s paintings use color as a coded language to connect them to underlying emotional truths and life experiences. “It’s about the spaces in between life,” Saldivar says. “Little events, marriage, divorce, jobs, relationships, things that don’t pan out and you move onto the next.” Each piece is a personal reflection on life, relationships, careers, pitfalls, and successes that Saldivar explores with emotional exuberance through his signature drip paintings. 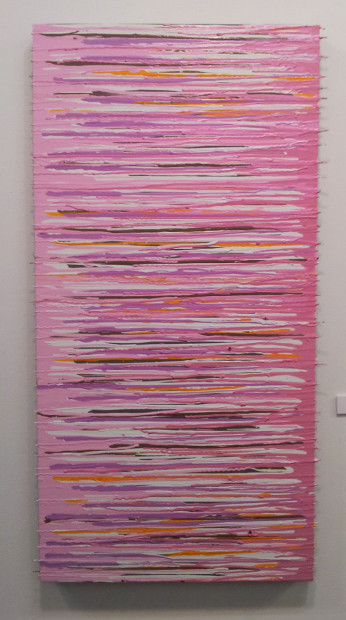 The standout piece of the exhibition is titled Dirty Love, a long, vertical painting glowing with ruddy pigmentations that reference one’s promiscuous choices in life. “Pink will always mean sex to me,” says Saldivar. Saldivar based the piece on the past few years of old girlfriends, a failed engagement, flings in between and irrelevances he experienced in the relationships. 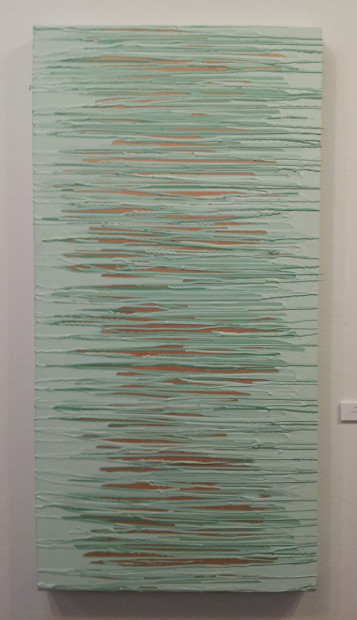 Death of Days contrasts deep crimson with the calming allure of a golden wood grain. Sense of Peace, a mint green vertical, alludes, according to the artist, to a changing of personal energy from a negative to a positive vibe, with the wood showing as “a bareness of the soul.” The soft palette of pastel green alludes to calmness, like an ocean wave. “You never forget the negative in your life…you build on it,” he says. 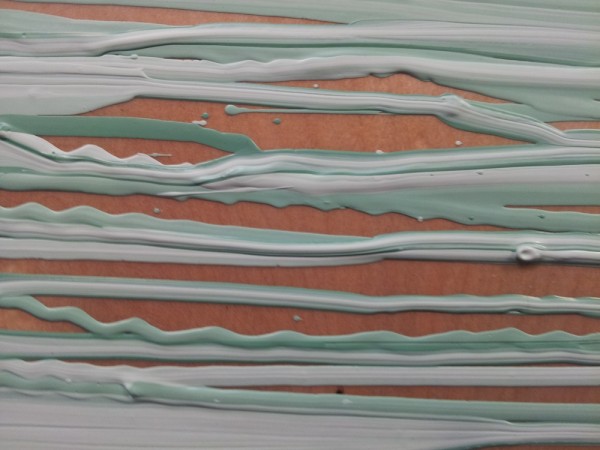 The show feels like a series of exploratory paintings between new and mature work, as if Saldivar is only starting to deal with how to properly manipulate, capitalize, and understand his place in the painting universe. His maturing painterly methodologies include shimmering metallic paint and drips that extend off the canvas like blunt cactus needles in a 1950s pseudo-spatialist Lucio Fontana homage. Some of Saldivar’s drips create windows to the delicate birch wood panels beneath the painting—spaces void of color or lines, which allow breathing room between seemingly continuous layers of paint. Amid layer upon layer of drips, these breaks act like the spaces between paragraphs in writing—a moment to digest.

Saldivar’s ten paintings are arranged purposefully in the narrow gallery, black and white paintings on the long left wall, vibrant colors opposite on the right. It’s the hue-riffic essence of what Silkwörm Gallery and Studio owner Joe Mc Hug says is a “Post-Chicano” sensibility. Colors make up the distinctive voice of the new generation of Chicano painters who grew up in a Latino homes in San Antonio, amid brightly painted houses, fences, loud personalities, and the Mexican market aesthetic of serape colors, and who use them as a base of inspiration, embracing a lifestyle that celebrates color.

Anchoring a spot next to the entry door to the gallery is One Door, the first piece Saldivar hung in the exhibition. For him, it summarizes the exhibition’s direction. “You enter in and out of relationships, jobs, careers…there is only one way in and out: the door…throughout life you come in and out of people’s lives and circumstances.”

Mc Hug’s decision to include James Saldivar in the Silkwörm Gallery and Studio annual line-up is also a space in between. “It’s our premier abstract show, in between representational ones,” he says. “I don’t want to be type-cast as a gallery. Silkwörm is evolving more facets of visual arts, and James [Saldivar] is an example of my motive to broaden and round out our base.”

The umlaut is present on the logo. Strictly for aesthetics. Inspired by heavy metal logos. I don’t usually use it outside of that context