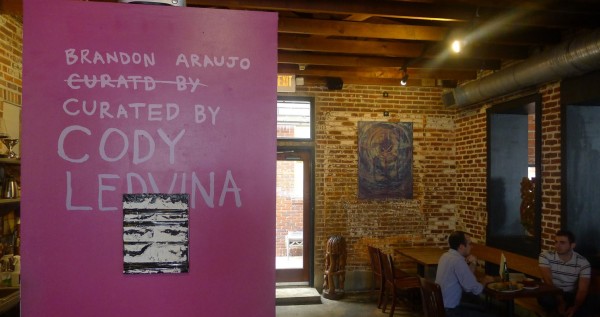 Five more paintings are scattered throughout Café Brasil, Domy’s neighboring sister space, where a wall by the bar humorously announces the artist and curator in bright magenta and pink paint. The word “curated” is misspelled, crossed-out and rewritten, and a painting is placed directly on top of Ledvina’s name. Like the sign, the placement of the works in the cafe is unconventional; instead of seeing the art in a gallery, the viewer has to encounter it another kind of social space. This decision, made by Ledvina to test how Araujo’s work holds up in contexts outside the traditional exhibition space, speaks to the curator’s happy-go-lucky sensibility, but feels confused: the art is too earnest to fit in the casual context of the coffee shop and too haphazard to belong in the formal gallery. 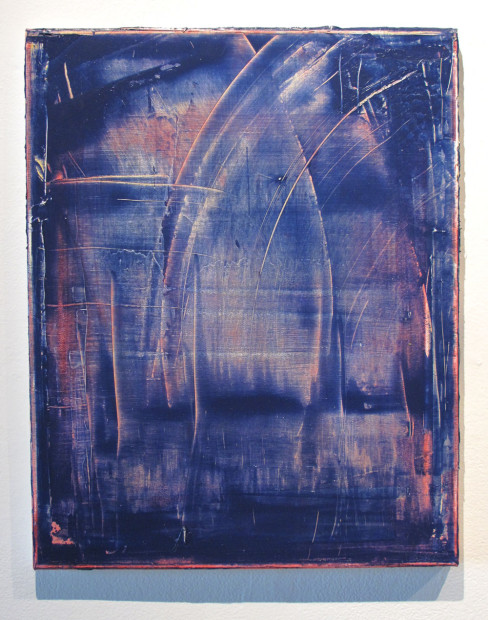 The paintings mostly fit into two series: the first group, the “Blue Paintings,” layer a deep indigo acrylic glaze on top of a watery, fluorescent magenta wash that seems to soak into the canvas, sometimes letting fabric peek through. The layers of color are electric and eye-catching, but with several similar works in close proximity, they lose a bit of their energy. In each painting, the blue glaze is smeared and wiped through, revealing the bright color underneath in zigzags, rectangles, scratches and curves. This technique feels similar to the dynamic works of Gerhard Richter or Ron Martin, but relies more on the contrast of colors than the action of the paint’s application. Araujo seems to be attempting a kind of physical aggression towards the paint by carving into it, but the work comes off as tired and decorative without much sense of movement or expression. The larger works, which combine organic forms and aggressive technique, work better. Blotchy pink patches of paint scratched in neuron-like spindles and coils contrast with angular, geometric icons that vibrate on the canvas. These works echo the grace of watercolor and the acerbic qualities of street art.

The other series, the “Kapton Pieces,” are smaller, denser mixed-media works. Using spray paint, plaster, and Kapton film from DuPont, these works have a grungy, caustic, alien feel. The canvases are coated with a thick layer of sculpted, imprinted plaster resembling lunar craters, or crumbling architecture. Some are scribbled into. A dusting of black spray paint accentuates the plaster’s stark white and creates exaggerated depth in the works. Layers of orange Kapton tape, traditionally used as a thermal insulator on spacecraft, add a flat, transparent shine on top of the plaster’s mottled surface. In some of the works the tape looks expertly placed, winding in diagonals around the canvas, desperately bandaging the plaster as if the tape is holding some cloud-like material together, but in other paintings, the adhesive comes loose from the corners of the canvas, crumpled as if it was hastily applied. Compared to the Blue Paintings, the Kapton film works look messy and bungled instead of gritty and industrial, which detracts from their unearthly edge. 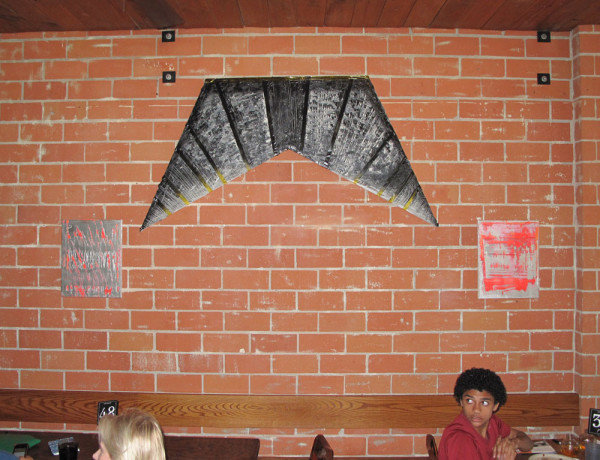 Four outliers to these series are some of the strongest paintings in the show. One is a large, black, triangular version of Araujo’s Kapton paintings. Placed high upon the wall of Café Brasil’s larger dining space, this work resembles something markedly extra-terrestrial, recalling elements of Darth Vader’s helmet or a wicked spaceship. More than the other works, this piece exudes a bizarre otherworldliness, juxtaposing the crests and whorls of the plaster with a freer use of Kapton, both painted black. The work repeats the lunar-crater references of the smaller Kapton works with sinister drama. The unusual shaped canvas brings out the strange, unearthly impulses that Araujo seems to be aiming for, and not quite pulling off, in his smaller works. 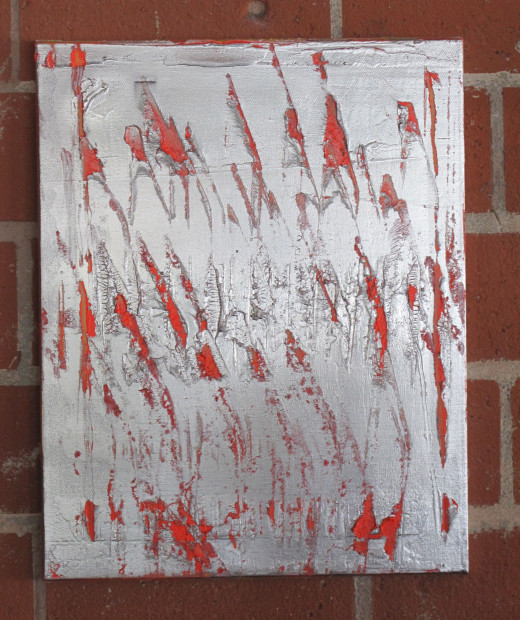 Two smaller pieces flanking this triangular piece, dubbed the “Chrome Paintings,” are more violent than any of the other works in the show. A background of intense fluorescent red is covered in thickly smeared metallic white acrylic paint, which is molded and scratched through to reveal the red below, like metal scratched back to show blood, mysterious and gruesome. These works are more successfully extreme, displaying a fierceness that the works in the Domy space do not. However, their placement in the café makes them easy to miss and awkward to view. It is curious that Ledvina would tuck away Araujo’s most forceful works.

Apart from a few exciting works, Araujo’s show felt repetitive. While the bright colors and strong textures were eye-catching, the small “Blue Paintings” reiterated the same colors and technique over and over, with a slightly different shape imprinted or amount of paint applied being the only real distinguishing factor between them.  Additionally, the deliberateness of Araujo’s technique is uncertain: sometimes his messiness contributed to the overall gritty sensibility; at other times, it felt accidental. Perhaps a presentation of all of the works together, instead of spread throughout several rooms in two different buildings, would have provided a more coherent exhibition.

Brandon Araujo at Domy is open until June 14th, or until further notice.