by Paula Newton May 23, 2013
FacebookTwitterEmail 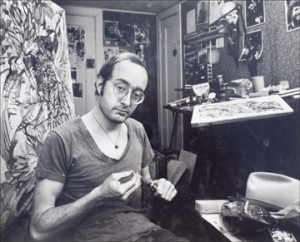 Jalapeeno received two National Endowment for the Arts Artist Fellowships and a public art commission for the Robert Mueller Airport in Austin. His photography and paintings were featured in numerous exhibitions throughout his career, such as Southern Fictions at the Contemporary Arts Museum Houston, Fresh Paint at the Museum of Fine Arts, Houston, the 1983 New Orleans Triennial, Jimmy Jalapeeno: New Works at Laguna Gloria Museum, Austin, and group and solo shows at d berman gallery, Austin.

Jalapeeno’s friends and family have been posting many photos from his life and long career on his Facebook page, where he is described as a “brilliant artist, trickster, raconteur, lover of kitties, excellent brother, amazing friend, splendid husband and beautiful soul.”

I appreciated Jimmy’s calmness & kind nature. There was a sense of peace about him that this world needs more of.

Prayers of condolences for Jimmy’s family & friends. Prayers of gratitude for a man who shared with others a life well lived.

I remember the always FAMOUS and INFAMOUS Jimmy Jalapeeno from the University of Texas art school. He was mysterious and his humor, dry and wonderful, always available. He made the old Texas Art Department have a feeling of being relevant and in the “scene.” His art was always surprising as he was.
Rest in peace art soul Jim Bonar! We will always remember you in our art!

I feel so lucky to have shared his life since 1988. He was the most amazing person with a truly pure heart. It is a great comfort to see all your comments and love. I will miss him most of all. Tiny also misses him.
We are grateful for Christopher House for letting him be with Tiny until the end.

While I love flowers, they do fade.
Please spread the love to arts organizations like womenprintmakers.com or Eye of the Dog or any arts organization that you wish to support.
loving all of you and your support,
Belinda