by Paula Newton May 10, 2013
FacebookTwitterEmail 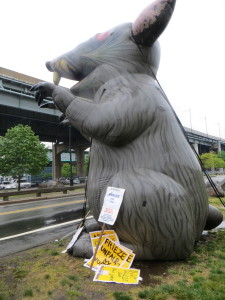 Outside Frieze (The New York Observer)

As Dallas recovers from last month’s successful art fair and Houston gears up for two more (Houston Fine Art Fair in September and the Texas Contemporary Art Fair in October), there’s one thing Texas fair organizers must be happy to avoid in this right-to-work state—union protesters.

Labor union representatives were ready and waiting at yesterday’s VIP preview of this weekend’s Frieze New York art fair, making speeches next to a giant, inflatable rat. Protesters, who said they opposed Frieze New York’s use of exclusively non-union labor, handed out flyers designed by political artist Andrea Bowers, who is represented by two participating galleries. When Bowers learned of the dispute a few days ago, she said she considered pulling out, but ultimately felt a responsibility to her galleries. Now, every Bowers work at the fair comes with a letter expressing her concerns and calling for negotiations.

Union representatives said that fair officials have refused to meet with them, adding, “All they do is issue statements that say there is no labor dispute going on.” Indeed, the fair issued a statement this morning, which begins: “Frieze would like to reassure everyone that we are not in a labor dispute with Teamsters Joint Council No.16 or any other collective bargaining organization. Frieze has never had a dispute with any union and has no disputes with any of its employees.” For more information on the protest, Bowers’ reaction, and the full Frieze statement, read the article at GalleristNY.