Remüv Hate and Be Someone: Persistent Hopeful Graffiti Rebrands Houston

Last September, two enormously visible pieces of street art rebranded Houston as a more hopeful city, at least to users of the I-45 freeway through downtown, effectively everyone. Two phrases, sketchily painted along a prime, impressively inaccessible train bridge, command northbound drivers, leaving downtown, to “REMüV “hate!”” and southbound drivers to “BE SOMEONE.” Almost six months later, they’re still there. 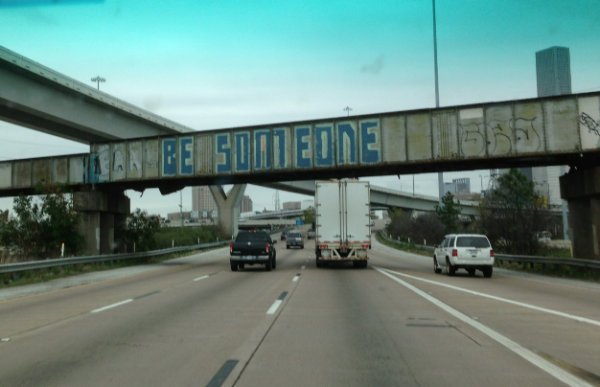 Brittanie Shey, writing in the Houston Press, called the Remüv Hate! piece a candidate for the lamest tag in Houston, citing poor punctuation and excessive simplicity, but how much can you say on a train bridge passing at 67mph? There’s not much more we can all agree on. True, the pieces run counter to the prevailing darkness and egotism of street art, and are technically crude, but if the unusual combination of idiocy, ugliness, goodwill, and balls fits, wear it! 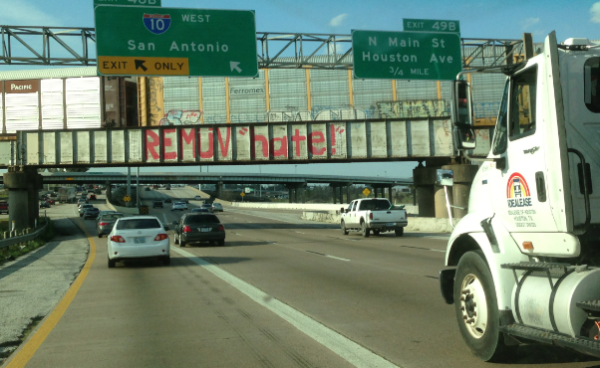 your commentary of these wonderful and uplifting piecies of street art in Houston seem almost negative.. keep that shit to yourself. these pieces evoke hope in houstons bright future and millions of people see them weekly.. Fuck You

Patrick, if you read the piece carefully, you will see that I liked them! It was Brittanie Shey who called them lame. I said they “rebranded Houston as a more hopeful city” and that they had an “unusual combination of idiocy, ugliness, goodwill, and balls.” That’s praise!

You should practice your reading comprehension so you don’t insult people for things they didn’t do.

If you look out from minute maid park down Preston street, you’ll see a newer one that reads: remuvthepast.

I also noticed a similar message painted atop one of the abandoned highrises in town, heading north. I think it’s the same ‘artist’ (iirc the message was the same)

This graffiti has been massively inspirational to many passerby, myself included. I’m always happy to drive past it, because I can always benefit from being reminded to “be someone.” And I know many others who feel the same way. All I got from Shea’s article was the idea that she couldn’t get past the idea of graffiti inspiring positivity, which is a shame. Positivity is never a lame message.

what year this grafittis were post it. does anyone knows!?

Some idiot with DOT painted over them in the past year, but they have been “restored”…imagine that! Have you seen the latest, though ominous one? “Watch out for goblins”…???

About short while back, someone added “else” to “be someone”. A few days later the “else” was painted over.

I could definitely agree with Thomas on Brittney being a bleeding idiot. I mean, this woman is worried about orthography and not looking at the bigger picture. The message is supposed to encourage others to cleanse one’s soul from so much hatred.

Brittney should definitely “Remuv HATE”….. maybe then she will find the energy to appreciate significant art and have a different mindset about it.

Bill… Kudos to you on this article. 🙂