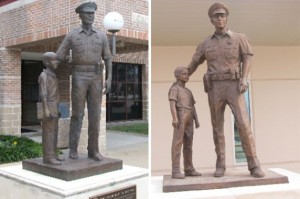 The two statues, now BOTH by Bob Pack

This just in from lawyer Keith Jaasma of the Houston office of Patterson & Sheridan, LLP:

Sculptor Bob Pack’s Pack Sports Bronzes, Inc. of Sugar Land (which has created numerous sculptures of some of the world’s greatest golfers) has settled its copyright infringement suit against Big Statues, Inc. of Provo, Utah over their unauthorized copying of “the Guardian,” a statue of a police officer and boy sited in front of the Sugar Land Police Department. Big Statues created a similar statue of a police officer and a boy for the Pearland Police Station in 2010, based on photographs of “The Guardian” that were sent by an employee of the City of Pearland.

“I’m pleased by the resolution of the lawsuit,” said Bob Pack.  “Artists should realize that there is valuable copyright protection for their works and that they have remedies if someone else appropriates all or a portion of their work without their permission.  Likewise, artists should take care not to use the works of others without their permission.”