A reinvigorated Art League Houston, under the leadership of newish director Micheal Peranteau, has commissioned a major new public piece by Houston artist Patrick Renner. Funnel Tunnel, a 180 foot long, funky trumpet made from reclaimed lumber will snake down the median on Montrose Blvd, just across the street from the 65 year old arts organization. The temporary piece is the inaugural effort of the Art League’s new Esplanade Project, which aims at placing more pieces on more Montrose medians in the future.

The piece recalls the Art League’s last surge of notoriety, when Inversion, the traffic-stopping vortex created by artist Dan Havel and Dean Ruck in 2005, was part of the Art League’s metamorphosis from  a set of ramshackle bungalows to its present modernist building. 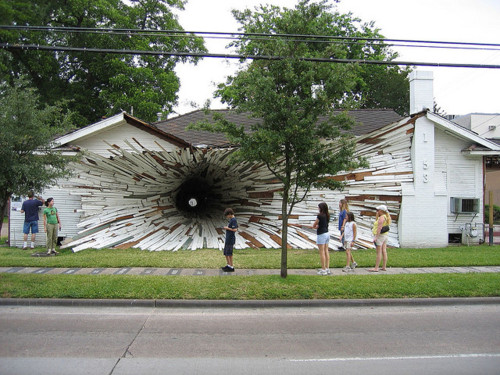 Seems like Dean and I left some residue of funnels, tunnels and perspective lines in the DNA of the Art League with Inversion. First Parazette’s wall painting with warping perspective, now Renner with his trumpet. Some sort of psychic mind control going on there. Can’t wait for another traffic stopper on Montrose. Go get ’em Art League…..