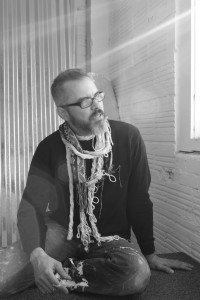 Houston performance artist Daniel-Kayne was found dead in “The Temple”, his studio/performance space in Downtown Houston on Monday afternoon. According to an unnamed source who was there when police arrived, he had hanged himself, apparently a suicide, although the cause of his death is still under investigation.

Born in 1968 in Liberty, TX, Kayne had  what he called ” a Huckleberry Finn-like childhood along the Trinity River”; he received an MBA from UH in 2000; classes at the Glassell School sparked an interest in creating. In 2006 Daniel-Kayne moved to New York City to continue his studies and partake in an installation/painting residency at the New York School of Visual Arts and shared a room a with a Korean Buddhist Monk at Zen Center on Spring Street. Since 2010, Daniel-Kayne was involved in performance, installation, and sculptural projects at Diverse Works art Space in Houston, ‘The Temple’, Deborah Colton Gallery, and The Orange Show, including ‘A Day with Art’ for AIDS Foundation Houston’s Teen Leadership Forum and designing ‘Notre Soleil’, a public art work in Lyon, France with the Texan French Art Alliance.

“Art is an expression of the soul in physical form, ” was Daniel-Kayne’s mantra, repeated a the top of each page of his website. In a 2008 video interview he says, “Ideally, I would like to enjoy my life, because, this is the time I’m in a physical form, and I don’t know if there’s anything after.”

You will always be apart of what made me love Houston. We had the 90’s.

RIP dear friend. You will be missed.

daniel-kayne epitomized the true spirit, soul and talent of an artist. He will forever be in the thoughts and hearts of those whose lives he graced. May you rest in the arms of angels. We will miss you and your great sense of being.

Daniel, Peace be with you.

Dear Friend, I’m so sad to learn that you have left this world. I hope it’s better over there, if there is any kind of “there”. We had so much more to do together. You’ll remain here, in my heart with all your art, as a shiny garden, where, with fragile strength, pain confronts beauty.

Daniel Kayne was a dear friend and inspiring artist. Daniel Kayne lived and worked in Houston but also greatly contributed to society through his art and giving in France, Canada,in his trips to the Middle East and his time in New York. Through the years, he created evolved, thought producing exhibitions, installations and performances which connected people at a higher level of unity than geographic boundries, political or religious differences etc… As recently as spring of 2012, he had solo exhibitions at the MAC in Dallas and Deborah Colton Gallery, with his profound meditative rooms.

Around 2009 – 2010, Daniel Kayne took the time to send out his “Thought for the Day” at the beginning of each day to thousands of people near and far. These daily quotes inspired many and gave them something positive to think about each day. I saved all of them.

On January 19th, 2010, Daniel Kayne wrote quote from Oliver Wendall Holmes, “What lies behind us and what lies before us are tiny matters compared with what lies within us.”

Dearest Daniel Kayne, what was inside you has been and will continue to be an inspiration to thousands of people near and far. You will be greatly missed but your good spirit and how you made such a positive impact on so many in Texas, Nationally and around the world will never leave us all.

My dear, sweet “little” cousin…I will always remember what a happy child you were, running around Aunt Donnie’s big ol’ house. Whatever you’ve been searching for all these years, I hope you found it. Always love you!

Such a horrible loss. Sweet Daniel, every time we look at Lowell’s growing oleander tree that you helped Michael save, you will be in our thoughts. Hoping your journey continues and know that we will see signs of it….

To Sweet Danny’s family, Our hearts go out to you at this time and know that we love you and we are so sorry for what you are going thru. Danny was a nice and loving young man who was sweet and tender and so good with older people. He will be missed. We will see you soon.

Such sad news to hear that Daniel has left us so swiftly. Each time I conversed with him he left an impression that was beguiling. His words, his wit and creativity always risky, always interesting. We will all miss him so very much.

Sweet Danny you have always been a precious soul. I will always remember you as that adorable little dark haired happy angel that never seemed to have any sadness and the affection for not only your grandma but all of her siblings. Even though our lives have taken us in different places to where we didn’t see each other much anymore I will surely miss you my cousin._

I’d like to say as an artist I knew and collaborate with Daniel, but I did not. I met Daniel through Ecstatic Dance Houston, as he came into Houston, and was excited to be moving into the apartment near the Menil. We all were hanging out in the park after dance, and I actually went over to use his bathroom. After this, I only probably saw him a handful of times, as I go away summers and winter breaks, and he began traveling for amazing art installation projects, which he would share with us via facebook. I learned about the Temple when out of town, and then one day Daniel brought his gongs out to the park. We sat in a stool while he “gonged” our bodies. Some of us danced. Some of us tried gonging. Daniel had all sorts of things for striking the gong and instructed us. Even though I didn’t have many long conversations with him, it always felt like there was a knowing, an “I get you” between us. Daniel felt clear, like a bell that had been rung himself now in stillness yet resonant with vibration. I had on my calendar to come to the Temple next week for his most recent invite to me. Wishing this made sense. My sympathies to all who will miss him the most, who knew him better than I, who understood what he believed. I know he isn’t gone, and hope this can be shown somehow in ways that bring understanding. Gratitudes for knowing him in a small moment.

I think this was unclear – Daniel danced with us sometimes. *

RIP my dear sweet cousin. You will be greatly missed by all who knew you!!!!

Daniel… Dear, kind, sweet, and enlightened Daniel…
I sob as I type this.. I am in complete disbelief like everyone else on this page…
I have all sorts of questions racing through my mind..
You were like a mentor to me, Daniel.
I found the strength to overcome my own darknesses because of the light that shown from you every time you graced me with your astounding and unforgettable presence.
Why can’t any of us see our own light?
This should be an explain to every single person, even those who do not call themselves an artist who do possess any form of darkness to ALWAYS recognize one’s own worth, light, and beauty.
My dear, dear friend. We all love you, and we all shall remember you.
Wherever you are, please… I beg of you to find peace.. At long last and forever.
~Fellow creator, artist, and friend

This is such sad, sad thing. He was such a cute, happy little boy who grew into such a handsome, talented man that always loved his family. All my love to Dineen and his brother and sisters. Although I did not see my cousin very often I will miss him dearly.

Daniel, I hope that you are looking down now and can see how your departure from our lives has affected all of us that you touched. I do not know what was inside your head at the moment that you left us. But, clearly we did not show you enough how much you were cherished. Know that every time I think of you, I will smile.
– Colleague

I send my deepest condolences to Daniels family. As a mom and a sister, I can not imagine the kind of pain this experience might bring. Please ~ Blessings of the highest! May you be deeply touched and moved in ways beyond knowledge or belief that somehow serve the good. And let us all who were touched by Daniels life – somehow understand the lessons & gifts presented – different maybe for each one of us. I want to say…. not fair… you cant do this…. unfathomable… and scream and cry and spit. Yet infinite possibilities exist here on planet earth. Wow ~ Daniel, you are deep and intense, soft and serene, loud and edgy, a mystic, a poet, a bright light… a dark night. May you master eternity! With Love ~ SunShine ~

My deepest sympathies to all of Daniel’s family & friends. I knew Daniel as a colleague at work, and he could be counted on to have a smile and usually a joke to make us all laugh. I have very fond memories of him. I mourn for him and am praying for his family especially, as they deal with this tragic loss.

My deep sympathies to Daniel’s family and multitude of friends. Daniel and I worked together and we became friends. I will miss his magnetic personality and love of life. Every person he met was better for it.

I will miss you my friend! Thank you for making my life richer. You are in my prayers

You were an interesting guy but I always knew there was something bigger going on. Then I find out you’re a renowned artist that has impacted the lives of so many through your generosity and works. I wish I could say I was surprised. Your light shined brightly my friend. You wont be forgotten.

I first met daniel-kayne back in 2009.
It was in my studio in Paris. We spent an entire afternoon talking and sharing our art experience.
It was our first meeting, and yet already very intense.
In 2010, Daniel opened his world and his studio (which he did not call « the Temple » yet) for my art and myself, during my 4 months residency in Houston.
It was an incredible experience. He was so generous of his time and his energy. We shared so much. One of his leitmotiv was then « let ‘s go and celebrate life ».
Which we did, many times. Together with several artists and friends, who he introduced me to in Houston.
I then helped him traveling his 10 or more crates to Lyon (France), where is did this amazing piece of art with some artist friends and the children of the cancer hospital. We spent three days in Lyon, going to art exhibitions, discovering the city by bike, and talking art and philosophy.
So many wonderful moments to remember. Among these, I’d like to share with you two of them: the funny way he would try to pronounce « bonjour » and, as you all know, his contagious laugh.

And suddenly, the daylight is darker, the birds are not singing as they used to. Even the trees lost a good friend.
Daniel, I want to tell you, wherever you are now, that knowing you made me a better person.
Much love,

I grew up with Danny. I remember your 21st birthday. You were my brother, my friend. I love you.

I still miss you Daniel .

I still miss you Daniel.