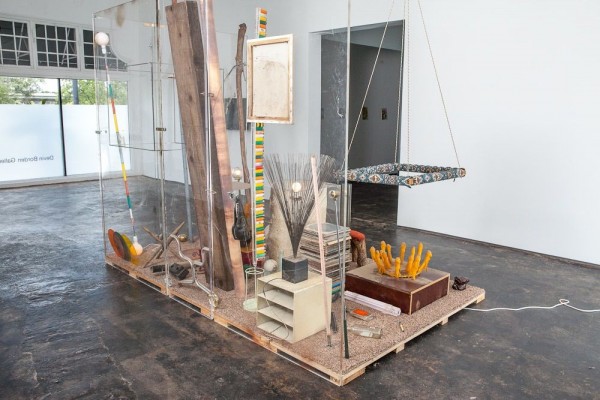 To follow where he’s been is to discover the words: readymade, “somebodymade” and “nobodymade,” lingering on the air like a trail of spoken footprints. At  Devin Borden Gallery, he presents four sculptural works concerned with these propositions of making, of which one lends the show its title: no I didn’t go to any museums here I hate museums museums are just stores that charge you to come in there are lots of free museums here but they have names like real stores. 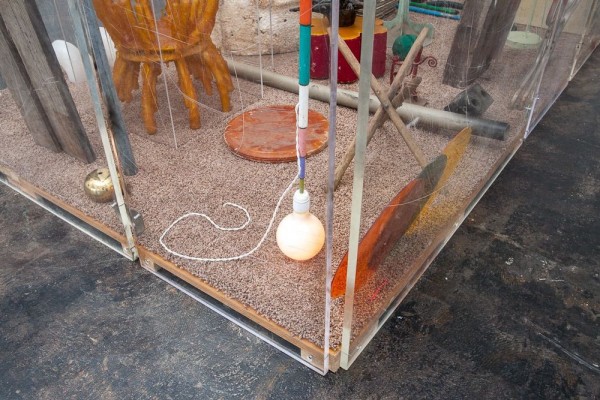 Two of the exhibition’s pieces consist of the segmented, multicolor pipe sculptures which are something of a Coolquitt trademark. One, my little phony (2012), is comprised of a series of dark blue, black and aquamarine segments, fitted at the end with an illuminated light bulb. Here it leans casually in the corner of a rear gallery, and harbors the sense of a floor lamp as an ad hoc mash up of a fishing rod and disposable mop handle.

Another, flying v (2012), bears the same segmented structure, but looks as though composed of tubular lawn furniture remnants, and features a central ninety-degree bend, suggesting the swept wing electric guitar of the same name. In this instance, the work is equipped with illuminated bulbs at either end, and the addition of a few primary colors to the mix. It is installed unusually close to the wall, but generally has the character of a light fixture one might observe while visiting Pee-wee’s Playhouse. 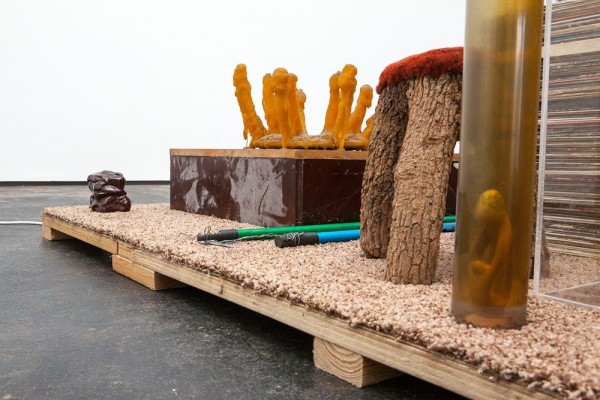 Of the two remaining works, Gymnasties (2012) is a looped, seven-minute video piece mimicking film credits. The mise-en-scène over which the credits stream reads as an alcove at a B-grade hotel—with a fussy floral wallpaper flanked by sheets of gray cultured marble wainscoting. Right of center is a six-bulb wall sconce, looking suspiciously like a compressed trio of Coolquitt’s bulb staves, below which is fitted a “no smoking” plaque. The music for these credits comes by way of a tune called “Ecclusiastics” by Charles Mingus, from his 1962 album “Oh Yeah,” whose length provides for the work’s seven-minute yardstick, and whose shifting tempo and rollicking, gospel-jazz infusion provides angular momentum. The credits themselves, sliding intermittently upward, are largely random; ranging from television personalities to tongue-in-cheek, junior-high style fabrications, and devolving periodically into simple repetitions of Mingus’ testifying shouts. Whether the image is of a place or a product, or for whom or what the credits serve, we are not told. But their overall character is ceremonial; another incarnation of Coolquitt’s fascination for assemblage, but here in the form of what are largely cultural intangibles: a piece of music, the facets of a vaguely suggestive image and a clutch of names, as though taken wholesale into a hobo’s bindle. However doubtful or elusive its meaning, or even its prospect for having one, Gymnasties nevertheless serves as the most—if it may be said—engaging work of the exhibition. 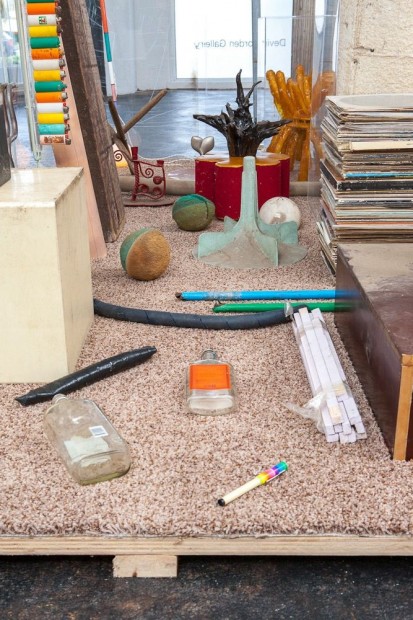 The remaining piece, and certainly the main dish, is Coolquitt’s no I didn’t go to any museums here I hate museums museums are just stores that charge you to come in there are lots of free museums here but they have names like real stores. The piece is a floating floor capped with a stiff brown carpet, framed on two sides with heavy, scuffed Plexiglas panels joined together with drawer handles and densely populated with objects with the general feel of garage sale dregs. There is a warped and split piece of 2 x 8 lumber, an upturned pole replete with vestiges of its concrete footing, a tree branch, a geometric table base, a pile of old LPs, a golf club handle with a doorknob for a head, a shank handle made of electrical tape, two empty booze bottles, a deflated speed bag and two constructions best described as stools with super numerous legs resembling dildos, and covered in a sickly resin—one covered in a display case with original dust. 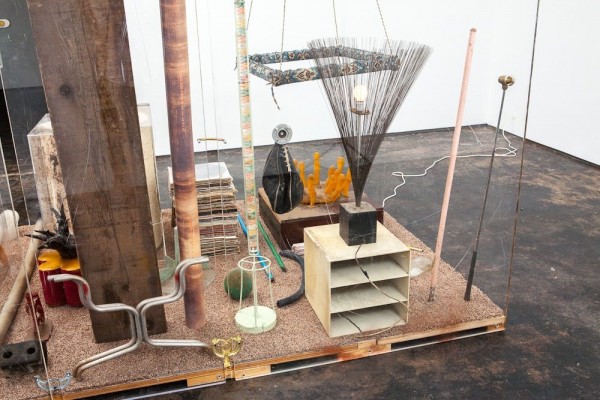 Of course there are more objects, and of more or less like kind. There is also one of Coolquitt’s multicolor two-bulb rods leaning into the Plexiglas corner, and a stand made of lighters fastened to an acrylic tube. Coolquitt’s lighter pieces in particular enjoy a kind of mythological reverence. They are scavenged, often from locations near where they are fashioned or exhibited, and often from locations where they served as disposable drug paraphernalia. Frequently they have been customized for such purposes, and Coolquitt sets them forth as an interesting signifier of consumption, its processes and architecture, and the economic geometries which simultaneously revile and require it.

For a review in “Art in America,” Brian Boucher once described Andy Coolquitt’s work as “somewhere between a friendly pat on the back and a rude finger up the ass.” And as a means of responding to its often being as rigorously juvenile as it is conceptual, it’s quite fitting.  In aesthetic terms, the work is almost exclusively and entirely ugly, and this, not in the sense of the charming swagger of art brut, but in the sense of an artist wantonly seeking to disavow an aesthetic responsibility of any kind. Instead, the work is broadly conceptual, with Coolquitt relentlessly comparing and conflating the nature and significance of the found, the appropriated and the made. The extent to which the work succeeds in this capacity is both surprising and real. As a tea of many spices, Coolquitt’s high-concept mélange of flavors can deliver unexpected rewards for those who patiently savor its notes. But if Coolquitt’s is a complicated beverage, it is also this insistence to have it all ways, which prevents his work from achieving the 80 Proof distillate of a Duchamp, or Broodthaers, or Beuys; to which he appears to aspire.

Andy Coolquitt: no I didn’t go to any museums here I hate museums museums are just stores that charge you to come in there are lots of free museums here but they have names like real stores.
Devin Borden Gallery
September 7 – October 27, 2012