Everybody Loves Andy- And Now Everybody Can Help Pay For Him! 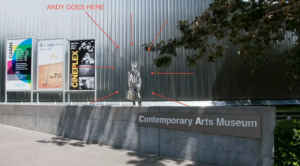 Houston’s CAMH is branching out into crowd funding: a new indiegogo campaign to raise $32,000 to bring glitter-panda painter Rob Pruitt’s  shiny statue of Andy Warhol to Houston in September for a year-long visit. According to CAMH Director Bill Arning, who outlines the CAMH’s proposal in a three-minute promotional video,”once he gets here, I think you’ll see that the entire city feels more like a party.”

Now, if we could just get a chrome statue of Beyoncé . . .