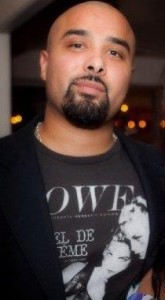 Frankie Garcia III, partner in Dallas’ Rising Gallery, is apparently missing. In an emotional broadcast email Glasstire received at 11:14pm June 6, from Audra Sewell-Noblique, Social Media and Membership Chair for the nonnprofit Art Professionals of Texas, where Garcia is on the board of directors, claims that “A deer [sic] friend, artist and arts advocate and community leader is missing.  He was last seen Thursday, May 31st either leaving the opening of 400 Ervay in Dallas or possibly at 800 Jackson, at Rising Gallery, where he never entered to retrieve his personal laptop, ipad, etc. This is not indicative of him,” adding that “we are approaching seven days and are still not sure if his family has filed a missing persons report.”

A flurry of posts to Garcia’s Facebook page beginning Wednesday afternoon, June 6 corroborates Sewell-Noblique’s story; no one says they’ve seen him. One friend, Dee Hill, adds some info: “Police have been notified, hospitals have been called. Now we need YOUR help! Frankie Garcia III was reportedly dropped off around 10pm Thursday May 31st just outside Rising Gallery at 800 Jackson St, Dallas TX 75202. However, this is now questionable. If you have seen or heard from him since then, please contact Rising-Gallery Dallas at 214-559-4158.”

Garcia’s last post was on May 31 from the gallery, just before the opening of their Project 7×7 show. Stay tuned.

Please notify me on any updates. Praying for you Frankie.

Thank you for posting this. Maybe you could take off the stay tuned and replace it with your help is greatly appreciated. For those of us that know Frankie this is more of a plea for help than a news story. Thank you.

A missing persons report was filed in Cockerell Hill. Please contact the CHPD with any leads or information. Cockrell Hill
Police Department

Thank you for posting, Audra.

I am curious what the REAL story is…Hopefully , there will be some follow-up since so many people were very concerned about him disappearing this time.