FotoFest 2012 wraps up this weekend and it’s the last chance to see its offerings as well as those at participating spaces. Definitely make time to see Jawshing Arthur Liou’s stunning panoramic video at Poissant Gallery. Poissant may not be on your radar but this show is a must-see. Kora, 2011-2012 is projected cinema scale in the back room of the gallery. The video, which feels absolutely otherworldly, was shot on Liou’s four-day meditative pilgrimage (Kora) around Tibet’s sacred Mount Kalish.

His pilgrimage wasn’t tourism, Liou had lost his young daughter to leukemia in 2007. Grieving, he turned to Buddhism for solace  The wide-open landscape is so beautiful that it is painful. The focus of Liou’s lens is selective; the mountains in the distance, the faces of other pilgrims are all blurred. Only the path in front of him is in focus. The camera sees brightly colored prayer flags, the stacks of rocks, some with bits of engraved text or symbols, others with rusty-looking lichen that looks like dried blood, a patch of snow with what appears to be a drip of actual blood…

The footage is transcendent, it looks as if he’s capturing the top of the world. It’s moving whether or not you know the reason for Liou’s trek. If you do, the poignancy is as painful as the beauty. 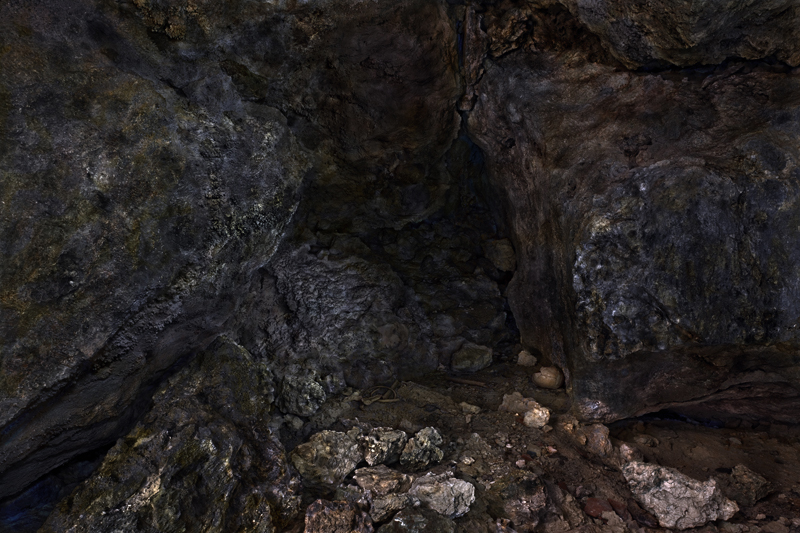 James Nakagawa, from the series "Gama"`

Also at Poissant are Osamu James Nakagawa’s photographs of the caves of Okinawa. The caves were a sacred site for the indigenous peoples of the island off the coast of Japan and where Okinawan civilians, Japanese soldiers and Allied forces hid from and fought each other during WWII. Soldiers committed suicide rather than surrender as did whole families who were told they’d be tortured if captured by the Americans. Caves were blown up by both sides with people inside them. The list of horror is long. 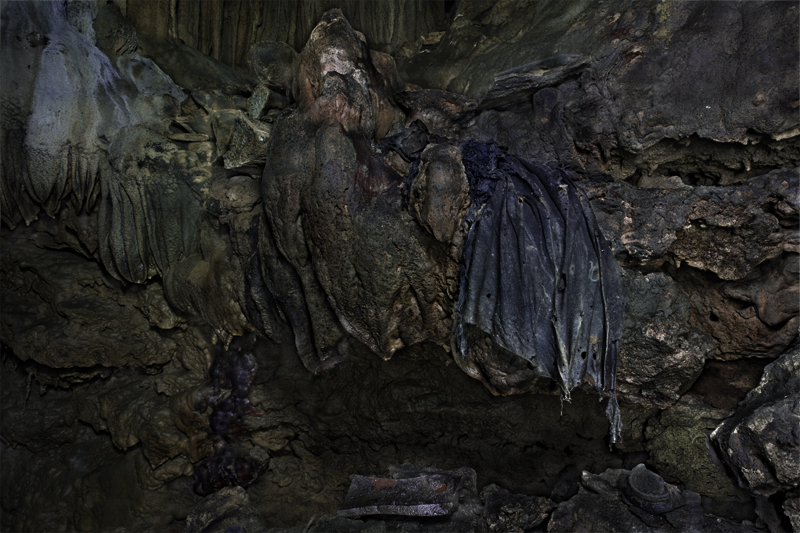 Nakagawa’s images were shot in the caves by painting their dark interiors with a flashlight to illuminate them. Here and there in the expanse of rock you see evidence of past life – but mainly past death. A piece of shirt is stuck to a rock seemingly turned glassy by a blast of heat so intense the rock literally melted. You see a glimpse of skull here, a femur there. To call them “haunting” is an understatement.

This was one of the best exhibitions I have had the privilege to work through- even though I sat with the work almost every day for a month, I never got tired of looking at it. Sitting in the gallery was like being in a temple… though the exhibition is over, I will definitely be going out of my way in the future to see work made by these two artists.