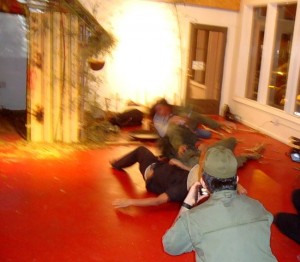 The photograph may be blurry, but art/combat blogger Robert Boyd got the shot as he reported on Saturday’s opening at G Gallery. The show, by by Otis Ike and Ivete Lucas is about Vietnam war re-enactments and featured a staged performance with fake soldiers creeping up on fake Viet Cong in a grass hut. The fake violence was rudely interrupted by a drunk and very angry woman who decked several participants before being dragged off by her friends.

What?!?!?! Sounds wild. Anyone see this care to elaborate?

I was one of the reenactors. Some drunk lady who had been hassling gallery patrons and us all night ran into the middle of our performance fists swinging screaming obscenities and tackling us kicking people on the ground. She literally dove superman style at us and causing us to fall into a dogpile. At one point she jumped on the back of one of the soldiers who tossed her off and she fell face first on the concrete floor and laid motionless (maybe unconscious) as we continued our performance. After laying there motionless for I dunno how long, couple gallery assistants rushed in to check on her, flipped her body over. Her face was all bloody with busted lips and TEETH. She was dragged out of the gallery still yelling at us and I think taken to a hospital. Such is the power of art!!

Her reaction — though, yes, she was drunk, was caused by one of the reenactors literally shoving a gun in her face. Some people may find reenacting violence as entertainment or a hobby. Though I don’t condone violence being perpetuated, her reaction to the reenactors was the most poignant part of the whole experience.

As far as I know, she didn’t go to the hospital. She was taken home.

how do I always miss all the fun?

Unfortunately for you this has all be recorded and a room of people witnessed the events you are distorting rendering your account irrational. Otis Ike never once touched you, he did tell you to fuck off after you lectured him about how important you are. A good hand full of us really enjoyed hearing you yell “Do you know who I am? DO you know who your talking to?”and you put you finger onto the artist. Funny how reality can change in the text. You must be very important, but it is unfortunate that you are not honest and were not able to understand a situation that you had nothing to do with. Next time you make accusations that are not true, we will actually know who you are. Smart people who were actually there, can think for themselves.

Otis Ike and Ivete Lucas do not support negative comments and accusations. It is very unfortunate that a woman joined the reenactment and was injured. We wish her the best of health. For the record, the injured woman was not “attacked” by us or any performer at any point in the evening. We had $8 plastic toy guns. In addition, I have never touched a woman named Zoya Tommy.

Thank you to everybody that came out and enjoyed the performance.

Could somebody please explain the point of the “reenactment”?
I grew up during the Vietnam war so I know it’s a very charged issue –

This thread makes the whole thing so much more hilarious.

The ‘drunk lady’ was Mariza Faggin, an artist who shows at Nauhaus. She lives around the corner from the galleries. She is about 4′ tall and 85 lbs soaking wet. And was p*ssed that someone pointed what appeared to be a gun at her.

Wow.. Mariza? really. She is a big supporter of the arts. Im gonna side with her.. KA