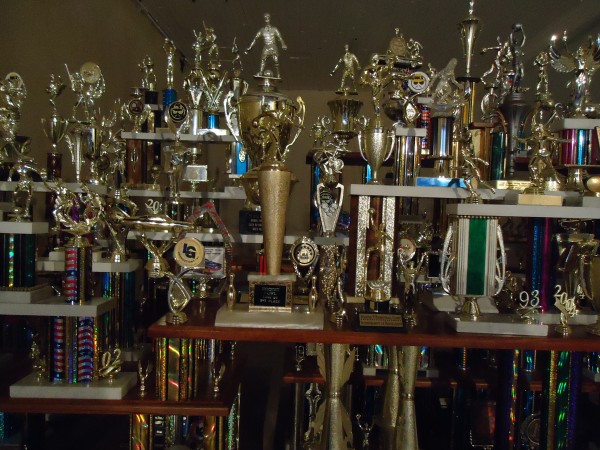 When we were driving to Marfa there was a shift in the landscape. We entered the desert. “It’s like we’re on Mars,” I said and my friend stretched out his arms and let out loud a sigh. The sky was huge. Scale matters. In my last post on the interventionist and site specific exhibition, Nothing Beside Remains curated by Shamim Momin and featuring a handful of young contemporary artists, I thought about the works as sets or screens, something that made the landscape or the viewer’s place in space more apparent. LA artist, Ry Rocklen’s masterful Second to None is less about set-ups and more about objects and size, the scale of the room in relation to the scale of a conglomerate sculpture made up of cast-off and reconfigured trophies. 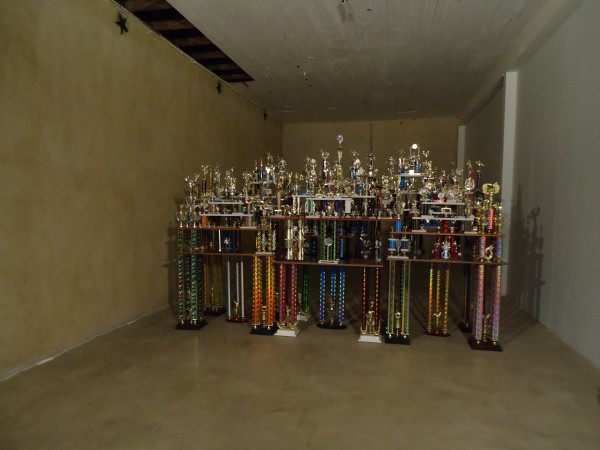 Rocklen is known for poetically re-casting the found object, often reconstituting it into a hand-crafted thing. It seems in this work that he is gently poking fun at the competitive nature of the art world or the posturing of the successful artist. We Are the Champions perverted and blown-up into a totem of success that strikes as both ridiculous and sadly poignant in its bravado. Perhaps, this is also a nod to Judd escaping the New York art world when he set-up camp in Marfa in 1979. 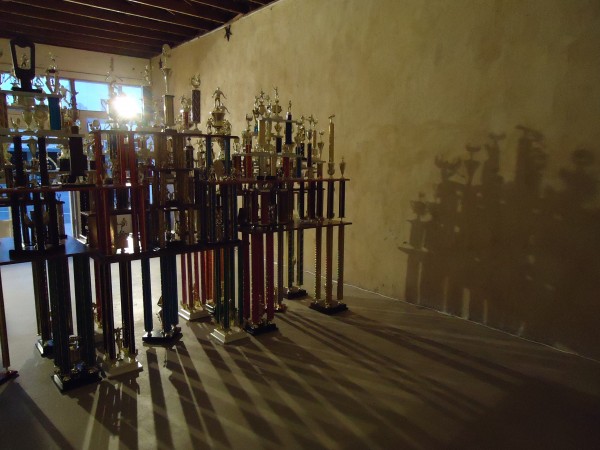 The sculpture is perfectly placed in an empty space on North Highland Avenue. It takes up the entire room and when the lights are on, it emanates a gold light while casting an impressive shadow. I especially liked walking by the space on the days the doors were closed and the lights were off. The sculpture seemed to sit there silently, waiting to be turned on and congratulated. 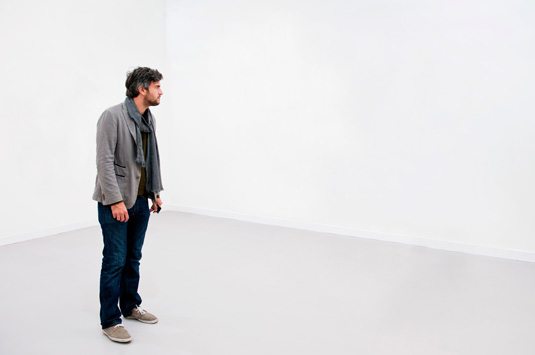 LA-based artist, Mungo Thomson makes beautifully designed publications. For this exhibition, he produced an US Weekly like rag depicting white cube spaces with the artworks eliminated. All that is left is the well-dressed spectator gaping at nothing. Another commentary on the art world? Maybe, but I like to think of it in terms of minimalism. It’s a  movement, after all, that made the viewer the primary subject of the work. Critic Michael Fried famously derided minimalism (or  “Literalism” as he called it)  for engaging “theatricality” or the new emphasis on the work as it exists in a situation, highlighting the beholder of the work. Theatricality essentially makes an object of the viewer. Mungo seems to exploit this definition, frustrating the relationship between object and viewer by focusing the work entirely on that empty gaze of the beholder. 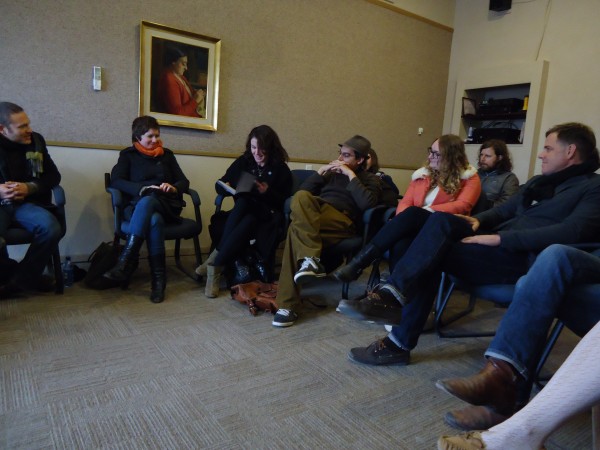 Karl Haendel is an LA artist who also created a wall of pressing questions in Marfa. I somehow missed this wall but did catch his AA meeting style performance where we all sat in a circle and read from his book appropriately titled Shame. Even though I had to leave the performance early to attend a Judd Block tour, I was game and decided to sit in the inner circle. Once Haendel described the premise of the piece, that we’d all be reading entries culled from the internet detailing anonymous writer’s shame, I wanted to bolt. We were having such a good weekend–looking at art, playing shuffle board at Padres, making new friends, watching the train pass through town, dying over the shrimp and grits at the Miniature Rooster–why take part in this downer exercise? I decided to stay put, to read my entry, and consider more carefully the prevalent discomfort in the room. Again, I had to leave early so I’m not sure how this all ended, but the process was actually less painful than I first thought. It was sort of fun to see how each participant read their entry, sometimes dramatizing the “shame” of an abortion or hating a spouse, or whatever. What I hope happened at the end is a deeper investigation of what shame is, why we feel it and why we name those feelings as as such (see this kind of amazing TED Talk by Brene Brown). Instead I’m afraid something else might of occurred–the congratulatory feeling of not being part of that book, of being above or beyond shame, whatever that is. Ugh. 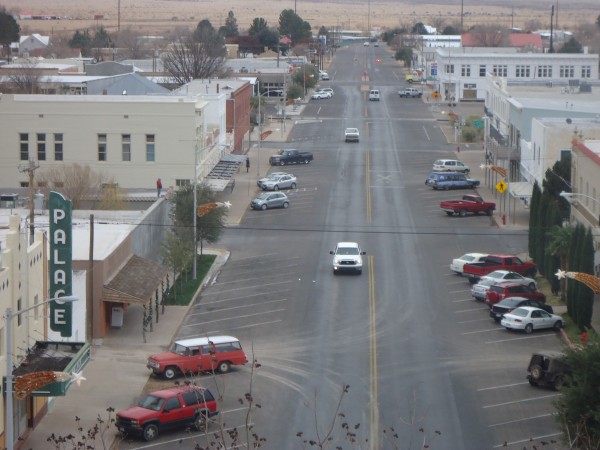 In addition to the trophy sculpture, Ry Rocklen installed customized curtains throughout the windows of Marfa. The piece instructs the visitor to go to the top of the Courthouse and look out the turret of windows. There’s a lot of smart things going on here: 1) land art often involves a type of pilgrimage and the walk up the the turret reflects this nicely. On the way up, it’s impossible not to admire the grandeur of the courthouse and all its beautiful wood work. The stairs are rough but at the top we were rewarded with this view, the ability to see all of Marfa. 2) It incorporates the people of Marfa as it intrudes or compliments the homes of those who live in the town. 3) Not unlike Garth Weiser’s sculpture that I discussed in the last post, the green of the curtains (see it up in that window, above the guy in the red coat?) charges everything around it. All that is green suddenly pops out–the Palace sign, a patch of grass, the trees lining the streets. Rocklen’s intervention slows down the process of looking, prompting the viewer to notice the world more carefully. 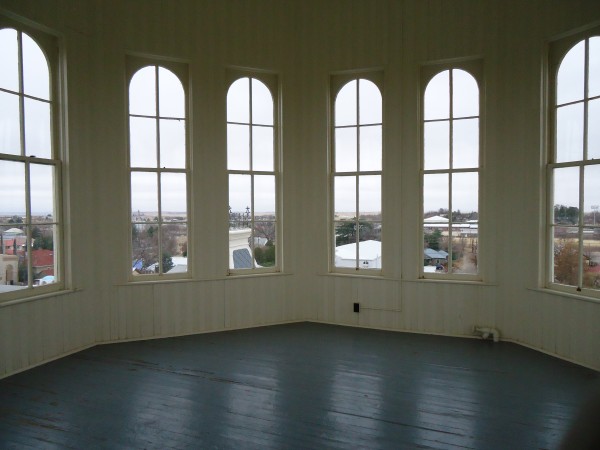 The turret at the Presidio County Courthouse

In an interview, the curator of Nothing Beside Remains, Shamim Momin, explains that the most rewarding aspect of her job is “having access to how art is an ongoing way of thinking about the world and not a one time thing.” Rocklen’s work illustrates that sentiment, moving beyond the scale of an object, proliferating throughout the Marfa landscape.

Nothing Beside Remains will be up in Marfa into 2012. Go see it.