Today’s El Paso Times profiles 82-year old muralist Margarita “Mago” Gándara, who recently abandoned her Juarez studio of 40 years to take up a new, diminished life in El Paso after being threatened by extortionists.  Once treated as  an “art queen” in Chihuahua, the she sees her relocation to her native El Paso as revenge for what the Times colorfully describes as “the relentless orgy of Mexican drug cartel and organized crime violence that has killed more than 8,500 Juárez residents since 2008.” Gándara is working on a series of paintings called “Immigrant Pilgrims” for a coming show at the University of Texas at El Paso. 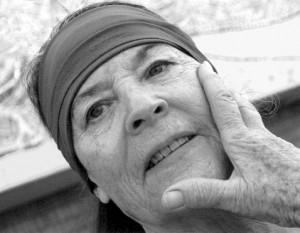