Early this morning, the building that houses Galerie Mado Chalvet, that purveyor of impressionist-style “masterpieces” in Houston’s Westheimer strip, caught fire, requiring the efforts of 50 Houston firefighters to arrest the blaze. Officials deemed the fire suspicious, and several local residents reported hearing a pop or bang before the fire began. The building is two doors down from the Former Turning Leaf antiques shop, which burned last October, taking neighboring Agora Cafe with it. No injuries were reported. On an unintentionally humorous note, the Fox News’ Melissa Wilson, the anchor covering the story, hearing that the gallery was empty (of people), misunderstood and said: “It’s lucky that the gallery was empty, and not filled with really nice art.” Too true. 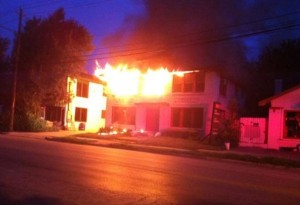 […] has begun circulating around that the former Galerie Mado Chalvet building, which was severely damaged in July by a fire that the Houston Fire Department considered “suspicious”, will be […]