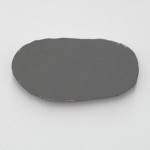 Have you ever noticed than when people look at abstract paintings they’re always peeking around the edges? Clearly the painter has left some secret nugget of wisdom on the sides of the canvas that must be ascertained in order to arrive at a place of complete understanding. Clement Greenberg did hammer the importance of flat surfaces and the shape of the support into the belly of art history, so it’s really no surprise that Modernism’s residue holds continued sway over how we look at paintings. But Greenberg’s taste, cloaked as a rigid ideology about what art should be, has, like most proclamations made by critics, become tiresome and limiting. As I wandered through the Blinky Palermo retrospective at CCS Bard and Dia:Beacon this past weekend I not only peeped around a lot of edges, but I also tried to cleanse my mind of Greenbergian Formalism’s strict criteria, even if it was just for a few hours.

Despite the current glut of abstraction, Palermo’s paintings, drawings, and architectural interventions still hold remarkable sway. The paintings featured at CCS are often a little clunky and slightly perplexing, yet as a result never fail to be mesmerizing. Graue Scheibe (1970) is a roughly five by ten inch irregular oval. It’s lumpy profile and slightly worn edge project  a minuscule three-quarters of an inch from the wall, though it easily holds the large swath of space its given. The paintings surface is as erratic as its shape, which draws you close and then promptly insists you back up again, a process that can continue for as long as your attention allows. These sorts of perceptual games are abstractions bread and butter. In a sense they speak directly to our vision and physical presence within a space. They let our eyes guide our bodies in seeking out clues, nuance, and new ways of seeing and thinking about form, while keenly subverting the relationship between subject and object.  Such acts, Palermo’s being a particularly salient example, subtly ground the viewer in the gallery space through active engagement, both physical and metaphorical.

Highlighting Dia:Beacon’s portion of the retrospective was the installation of To The People of New York City (1976). This series of nearly forty pieces, requiring a minimum of 275 linear feet for its installation, urges viewers to amble through the space with one another, deciphering the red, yellow, and black sequences in each of the works fifteen parts. An ode to his beloved Manhattanites, To The People is as much about the perceptual games and schematic progressions present in the paintings as it is a rumination on the make up of social assembly. Never explicit or offering much resolution, viewers meander throughout the installation, watching a red square bordered by yellow in one panel turn into a yellow field bordered by black in the next. As in Palermo’s other efforts, you are grounded in the gallery space, actively seeking solutions, and unconsciously sharing an experience with a group of individuals, who taken together, combine to form a whole.

Enigmatic and relatively silent regarding what his work was ‘about,’ Palermo’s objects and interventions themselves exhibit these often maligned qualities. Since the late 60’s, when art underwent its great politicization, this lack of a clear message echoing forth from a work of art can strike us as odd, bourgeois, or even lazy. In our sometimes militant belief that all art do something, its all too easy to equate perceived silence with political apathy, and as a result it’s likely that we miss much of the sheer joy and resultant power that seeing work like Palermo’s can give rise to. After visiting the exhibitions what becomes apparent is the clear sense of what his teacher, Joseph Beuys, termed ‘porosity’  within his thinking. Palermo was an artist who was loath to place limits on himself and his practice by defining it through language, instead choosing to leave it open to as many expressive options as possible. By the end I half expected to glimpse around one of the panels edges and find something inscribed there, a small reward for those interested in the act of seeing, and who, like Palermo himself, recognize the limitless possibilities inherent in doing so.