“On Wheels” at brand 10 artspace

by Charissa N. Terranova May 5, 2011
FacebookTwitterEmail 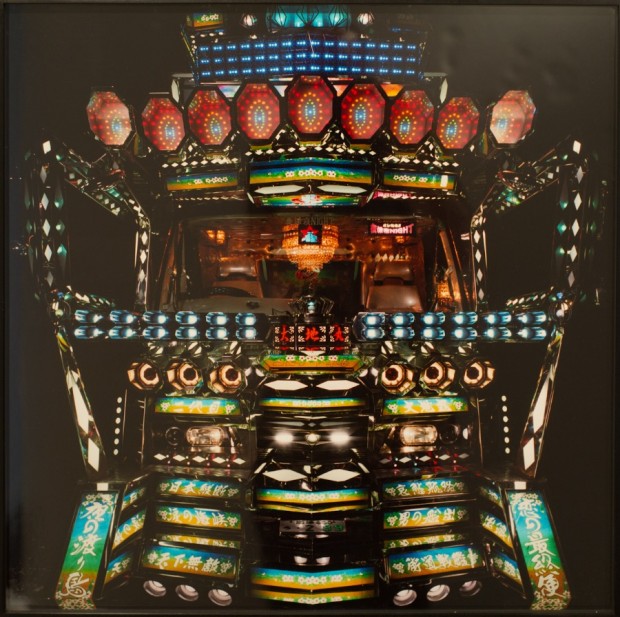 The latest exhibition at brand 10, Fort Worth’s smart, cozy and newest kunsthalle, On Wheels is equal parts kitsch and high politics. In this show, plain-faced middle-American falderal meets something with a little more get-up-and-go—literally cars, but also a grassroots sensibility embodied in the rolling wheel and its indexical reference to the sidewalk, road, national infrastructure and wars for natural resources. Don’t get me wrong: this show is more about the laughter of a good prank than pieties of responsibility. But its populist formalism, rooted in our collective fetish of the car and all else that transports, gives rise to a powerful and empowering notion of regional art, which is the central topic of the Glasstire 10th anniversary panel at the Fort Worth Modern, May 7. In framing the multifaceted and poly-vocal work of On Wheels in terms of regionalism, I hereby kick off the pre-discussion and, more importantly, bring specific framing to bear on the work of Heagan Bayles, Libby Black, Matthew Cusick, Ryan Humphrey, Masaru Tatsuki, Matthew Porter, Chris Powell and Justin Shull, the coterie of artists brought together by On Wheels curator Kathy Webster. 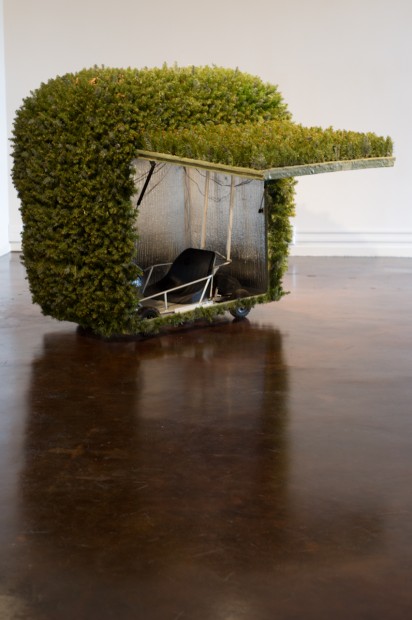 Beyond the simple functionalism of getting-there-now bound up with vehicular movement, this show, at some level, is about cadging an existential ride. Each work of art routes its own way through a ratty tangle of eldritch emotions. Justin Shull’s Terrestrial Shrub Rover, (2009) is a turf-covered pod on wheels. It looks like a giant topiary with the potential to roll. A video on YouTube, Terrestrial Shrub Rover Maiden Voyage (2009), shows that potentiality realized as Shull drives over and across the bucolic terrain of suburban America in his very extraterrestrial Terrestrial Shrub Rover. Chris Powell’s Hump on Casters, (2001-2011) is a large white swollen mound on small wheels. Its polish and tight form suggests Eva Hesse’s earthy minimalism and Louise Bourgeois’ finesse with molding tumors into art form. The piece is however truly about landscape and corporeal presence. It intentionally looks like a shiny white hill, the shape of which is based on the hump of a Brahman bull. 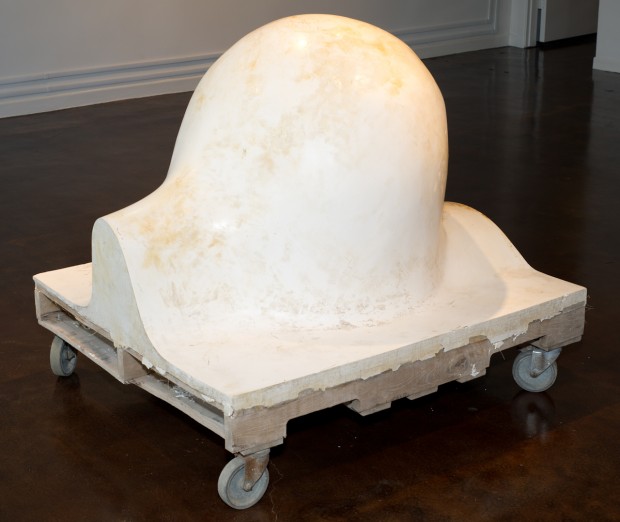 Libby Black’s Hermes, Gucci, Chanel, Roller Skates, (2011) does, in very pointed, miniature fashion, what most pieces in the show do, namely outline the extraordinary at work in the profane. In this instance a simple pair of toy skates is the currency of commodification. Black’s skates are laden with branding, bearing in handmade fashion the names and imprimaturs of money, arrival and ownership. Black’s skates are all about possession: your ownership of an object and, reciprocally, corporate ownership of you. Ryan Humphries’ Winnebago Skate, (2010), a pimped out toy camper, the wheels of which are jacked up, plays out a similar set of themes concerning the road, technological extension, ownership and identity. 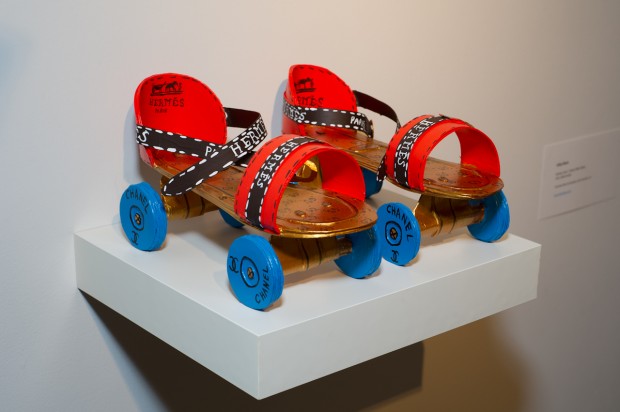 The implicit stability of the “region” and the changefulness and movement that is the crux of On Wheels might, for some, seem to be at cross-purposes, making the latter more about the non-place, as Marc Augé once described it, than the regionalist place. I would like to argue that the artwork in On Wheels offers a regionalism of the everywhere place—the ubiquitous localism that materializes in the form of roads, highways, gas stations, fast food restaurants and strip malls. It is a regionalism of what you see in passing while looking out the car window. It is a region on the run. So, theirs is a regionalism that might or might not be about Texas. 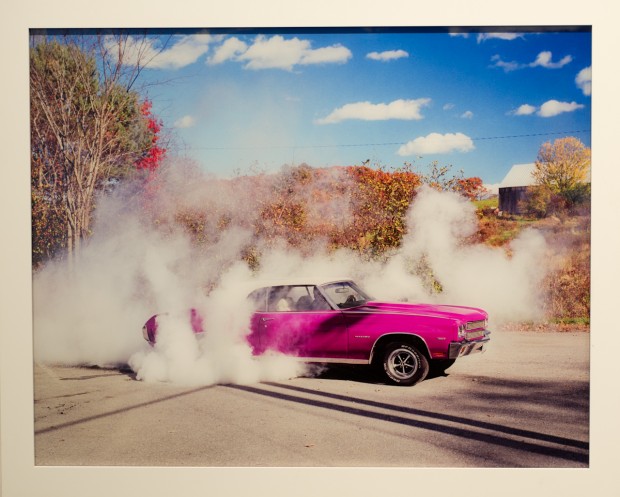 The majority of artists in this exhibition are in fact from places other than Texas—Japan, New York, New Hampshire and San Francisco. These are works that engage and embody the region in its most basic and shared geographical form—the American road, built and un-built landscape and by connection, the automobile manufacturing industry here and abroad, the sources of petroleum here and abroad and our international interests connected to the region characterized by the road and landscape.

We might say that it is a regionalism that moves beyond state boundaries while staying within the precincts of the United States. Yet, at the same time, it is a regionalism that knows global interconnection well, hence the electric light parade of 18-wheelers that is the center of Japanese photographer Masura Tatsuki’s work. Theirs is thus a regionalism fundamentally affected by globalization and the flows of capital. 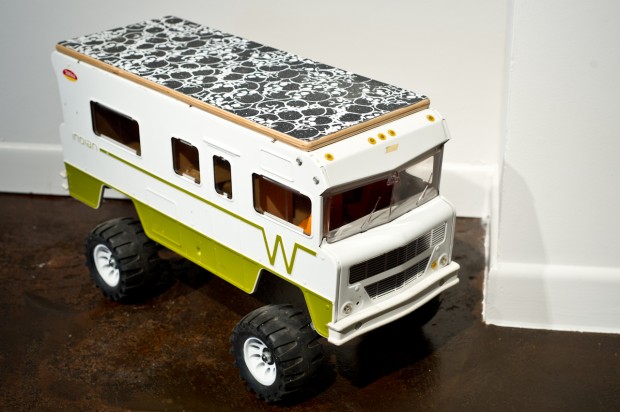 Seen from the point of view of an everywhere-place regionalism, the flickering and maniacal views to the road of Matthew Cusick’s File on Motor Transgression, (2000-2011) are not so much about the spliced, edited and fused car chases in Manhattan or Chicago, but of our manic relationship to technology and shared place here as addle-headed channel surfers sitting on the couch in front of the TV where we actually saw the original footage in late-night movies. And the fetish-object photographs by Matthew Porter and Heagan Bayles describe a related localism, viz., a regionalism, of the drag strip, where men preen their mechanical feathers for all to see in the form of a smokin’ muscle car or the singularity of a Ferrari.

In this show we find a regionalism that is a matter of interconnection and systemic relations, energies coursing through roads and airways while also forces for the beauty of a down-home healthy guffaw. Its resistance to globalization is not so much a matter of cutthroat, loudmouth politics but of a matter of just being. In that it is here, local and part of the workings of a not-for-profit space, it is a counterforce to operations over and beyond national boundaries. It bodies forth a regionalism against globalization, enabling a call for the “recuperation of local powers of self-determination” as Marxist geographer David Harvey would have it.

Brand 10 in Fort Worth is a small, plucky space with carefully focused energies, as proven by On Wheels, a mind-prodding, formally hip and fun exhibition.

Charissa N. Terranova is Assistant Professor of Aesthetic Studies at The University of Texas at Dallas. She lectures and teaches seminars on art and architectural history, theory, and criticism and media and new media theory. She is a scholarly writer and freelance curator and critic working both nationally and internationally. In January 2010, she stepped down from the position of Founding Director and Chief Curator of Centraltrak: The UT Dallas Artists Residency in order to complete her scholarly manuscript.

[…] Charissa Terranova wrote an exhibition review for “On Wheels” which is on view in Fort Worth, TX through May 21, 2011. Below is the original essay from the Glasstire webiste. Original essay here. […]