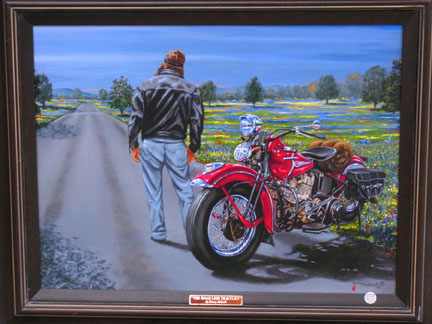 This month’s (April 2011) Artforum features a book review by Joachim Pissaro and David Carrier on a new collection of essays edited by Alexis L. Boylan entitled Thomas Kinkade: The Artist in the Mall. Included in this volume are essays by various scholars, including Jeffrey Vallance, who curated an exhibition of Kinkade’s work. Many deal with Kinkade’s exclusion from the art world. Pissaro and Carrier, according to their sites, are working on a book about “Art outside the art world”, so it makes sense that they would pay attention to Boylan’s collection. The essayists, one gathers from this summation, generally “approach Kinkade’s work with the aseptic gloves of tested and accepted theoreticians and historians of culture.” 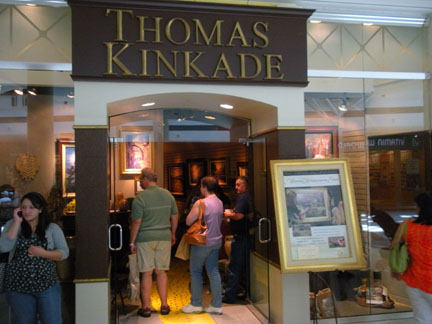 Hit Baby Gap, Grab a Corn Dog, Pick Up Some Art–Not Necessarily in That Order

The reviewers go on to say, considering how much credence is given the Kinkade phenomenon, “Perhaps the primary benefit of this book lies in the skill with which it teases out the vagaries of the art world’s love-hate affair with its own significant Other: mass culture.”

Makes me almost wanna read it. But really, I’m up to my ears in self-help material these days, what with the well known tomes: Codependent No More, Beyond Codependency, Irreparably Beyond Codependency, and the worldwide bestseller, Your Life as a Shit Hole by Jeremy Franks. Besides, why read about what a pack of eggheads have to say about the stuff when you can experience it firsthand? 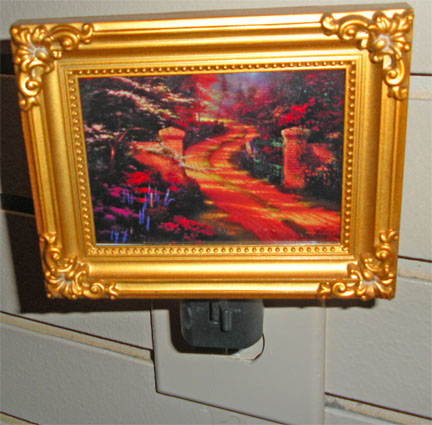 Back in August of 2010, Patricia Hernandez was doing research for her exhibition at Diverse Works, Parody of Light. Her mission was to witness one of Thomas Kinkade’s official highlighters in action at the Thomas Kinkade Gallery in the Woodlands Mall, and she invited me and another friend to tag along. The place was buzzing, and Kinkade paintings and drawings had “SOLD” signs slapped on the frames.People who had previously purchased Kinkades were lined up to have them professionally highlighted.

What astounded me was that everything in there was Kinkade-Koated: night lights, wind chimes, crucifixes, the “folds” of the garments of angel figurines, etc. Prices ranged from the absurd (for the real stuff) to sorta-affordable (for the digital reprints of earlier Impressionist-style works as well as current works just begging to be highlighted), to downright cheap for “gift prints”, mouse pads, and other fine “collectibles”. 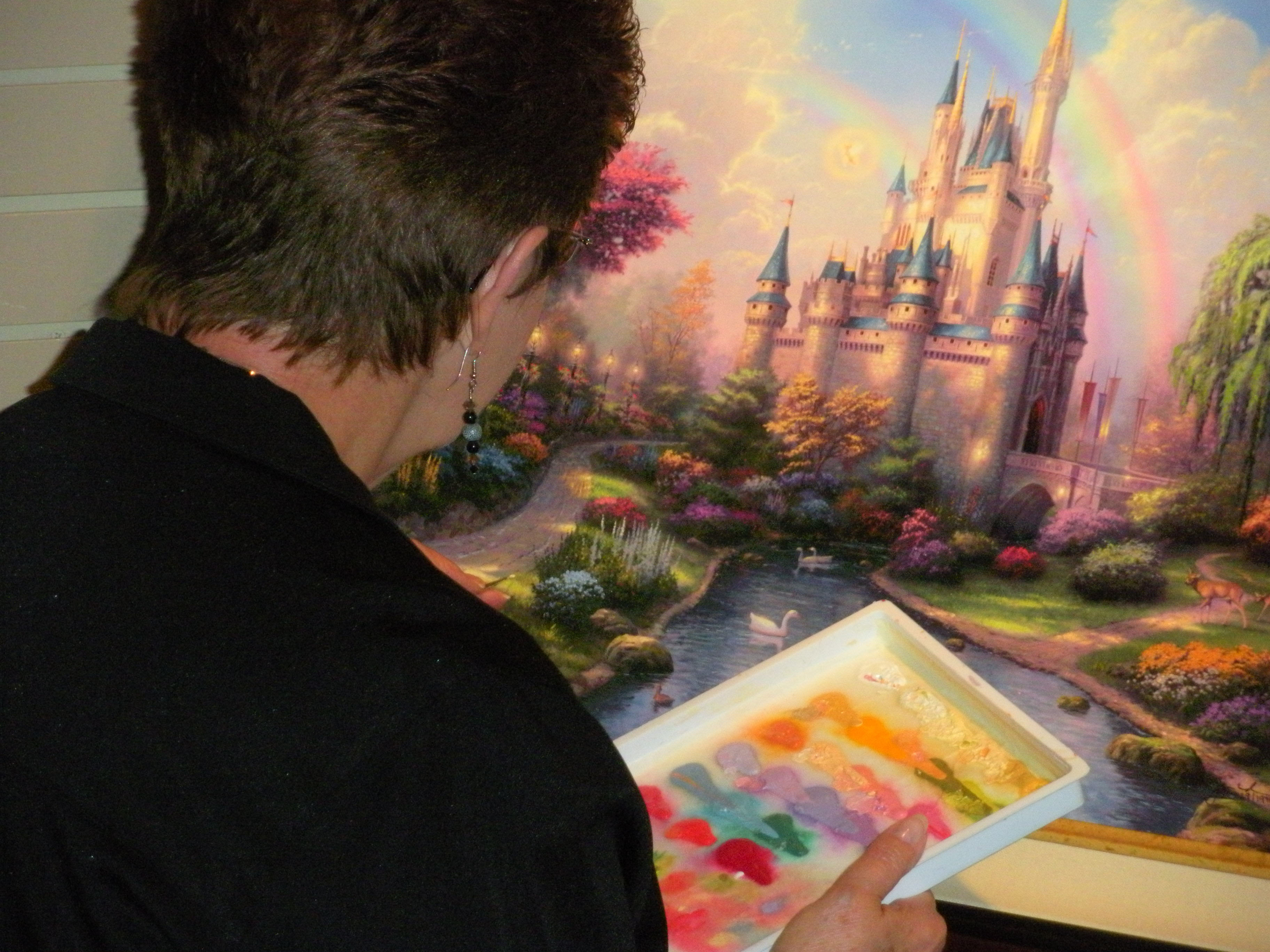 Just 6 Hours at Kinkade Kollege & You’ll be Highlightin’ Like a Pro!

Anyway, it all looked bad to me. I knew that I’d never buy any of it–I never buy anything. But if I had money, would I buy it? Good Lord, no. But would I not buy it because it’s bad? No. I wouldn’t buy it because it’s not bad enough. The place was floor to ceiling with shit that looked like something out of somebody’s grandma’s house if she’d allowed a Kinkade Krew in to koat every surface. This, by the way, was (IMHO) the best thing about Hernandez’ Parody of Light show at Diverseworks. Hernandez plastered her doctored Kinkade images on everything from lampshades to toilet paper. 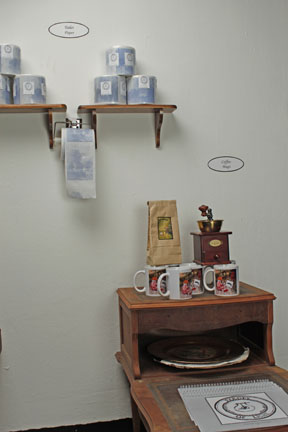 Kinkade’s work, self promoting, and mass marketing offends an awful lot of artists. But there’s bad, manipulatively marketed stuff all over the place; it doesn’t seem to raise as much ire as the topic of Thomas Kinkade. The Kinkade Gallery in the Woodlands Mall had a staff that was helpful, earnest, chirpy, sincere and without a trace of irony. There were dumpy couples who’d brought their treasured digital prints in to be touched up by a woman who was probably missing her Aerobicize class to strategically place globs of water soluble oil paint on a canvas. Here they were: Pissaro and Carrier’s “significant Other”, a market that few in the contemporary art scene could or would even want to penetrate.

It’s Official: Thomas Kinkade is Exclusively Represented by Our Lord

A few months after that I visited Old Town Spring for the first time. I’ve lived in Houston since 1982, and I didn’t even know it existed. I never knew what I’d been missing! According to the website, it’s the “perfect place to shop, dine, and step back in time.” There is an old-timey feel about it, what with the “Amish Barn” and the railroad car turned eatery called “The Loose Caboose” (who came up with that one? is that something a place serving sausage links and Frito-pie should be calling itself?), and enough stores selling smelly candles to make you think that electricity hadn’t been invented yet. I was a little disappointed that there wasn’t some sort of Mayor McCheese type strolling about with an official air, but I was there in the middle of the week. Maybe they saved the Kewpie Doll and Lovable Hobo parade for the weekends. 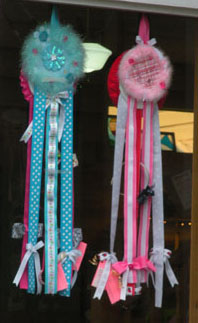 Free Cake Balls, Fried Snickers, and Sugar Free Sno-Cone To Anyone Who Gets What These Are For

They sure do have, at least to someone like me, a whole lotta unnecessary crap. There were entire shops devoted to nothing but bath goop. Or bird feeders made out of old cowboy boots. There were also quite a few objects that I couldn’t identify, but I think you were supposed to hang them somewhere. There was also a place called “Artsy Phartsy” that sold nothing but clever signs. I sat there for at least 5 minutes trying to figure out the one that read: Put on Your Big Girl Panties and Join the Party! Huh? Big Girl Panties?

Wacky signage seems to be a pretty big thing there! In the window of a bakery serving cake balls was one that said, “Our Balls Save Boobs!” A triumph for the Pink Ribbon Project.

It didn’t surprise me, then, that in the town of Old Town Spring, where Superfluous is Queen and Cornball is King, there is a Thomas Kinkade gallery, which is part of the PTL (Praise The Lord) Gallery. I was surprised, though, that it took a tour through ol’ timey town to really ponder the Kinkade issue. 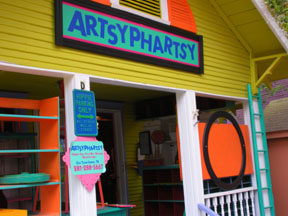 Would the “Fart” in the Conventional “Fartsy” Have Been That Offensive?

Kinkade buyers aren’t simply ignorant or uninterested in what’s going on with contemporary art—they’re downright hostile to it. Even more so than your average art museum visitor who purchases a Monet tote, umbrella, or refrigerator magnet. Because Impressionism is popularly considered, even among people who fancy themselves cultured, “real” art. And this brought me back to the Kinkade/Old Town Spring thing. It’s obvious that a lot of Kinkade’s earlier, more painterly works are in the impressionist manner.  What’s funny, however, is that the sales staff in the galleries insist that these early works were done plein air when Kinkade studied in Paris — even though many of them have gas lamps, horse drawn buggies, and women dressed in long skirts, bustles, and gloves. 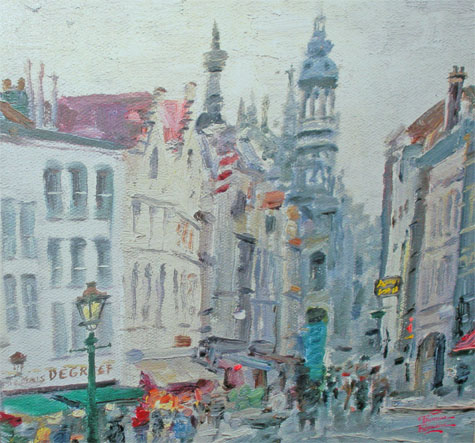 Can Kinkade time travel? Where, exactly, was he when he painted the people and city streets of gay Pair-ee? Is there an Old Town Spring there, too? If he’d been painting from life, having been born in 1958, he would have surely been forced to paint pesky newfangled horseless carriages and women brazenly trotting about in skirts above the ankle.

The Impressionists might well have been the last batch of thoroughly popularly embraced artists. All those agreeably pretty pastels. Those peaceful settings. All that stuff that doesn’t make people feel stupid for not knowing what it is. It makes sense that this movement and era might be romanticized. But Kinkade’s fake translations of Parisian scenes are not as well known and homey as  the treacly, Disney-fied settings that are so beloved by his masses, and the why of it all is fascinating to speculate upon, as Pissaro, Carrier, and Boylan do.

Most contemporary artists know that if they were to represent a fiction such as those in a Kinkade painting, it would be cultural critique, a parodic send up, or at least a tad ironic. There’d be a methlab in the garage of that cottage. A pregnant, Bristol Palin-like teen wearing a big crucifix to accent her maternity togs. An illegal alien outside shoveling snow. But that would alienate the significant Other. There go the audience and sales from the get-go.

It’s definitely irksome that most of our culture—what most of us in the art world would consider lacking culture—is not interested in purchasing or even looking at what we deem relevant works. If we wanted to legitimize and market ourselves to the Other, however, we could always, without condescension or irony, stand by the brand that really moves product, and with the logo that so many trust: a big fat golden cross, preferably with a long-haired guy tacked to it. 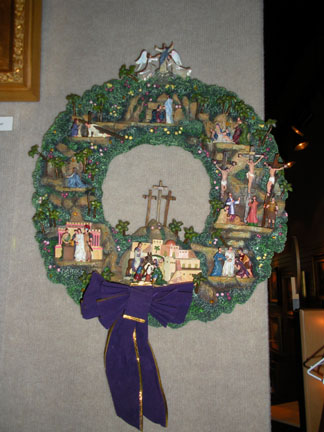 Sure, Immersing This in Piss Would Make it Better, But Would it Sell to Our Significant Other?

Laura, this “Kinky-aid” follow-up, from the Patricia Hernandez extravaganza at DiverseWorks, was what I needed while archiving some of my stuff from the 1950’s. There’s an improvement with “public acceptance/coping,” to be sure, because the population, education and exposure have expanded. BUT,there remains the same tune:
“Oh! Mairzy doats and dozy doats and liddle lamzy divey,  A kiddley divey too, wouldn’t you-oo?” A Kinkade or Walter Keen for you too. Thank you, Laura, for your on-going sense of humor with the seriousness of it all.